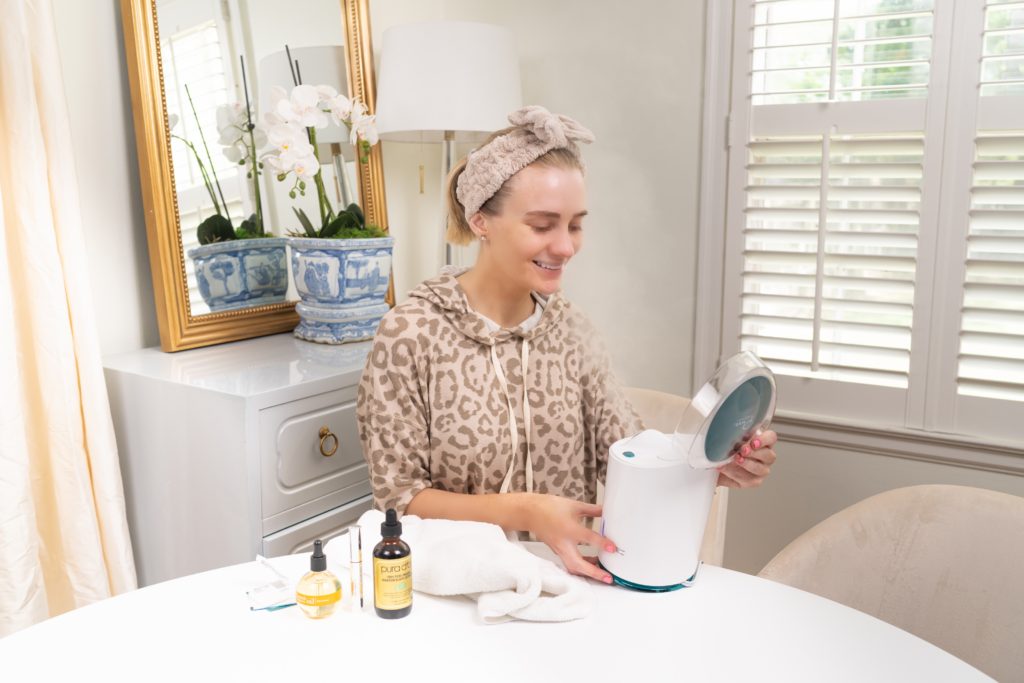 I wanted to take you all through my nighttime self-care routine. These are a few of the things I do before my skincare products and tools that have made all the difference. You have likely heard me mention many if not all of the items shared below on my blog or on social media. Here’s a step by step on how I use them, why and why you should too!

Once the water is added and you turn the steamer on it will start billowing steam immediately. It might take a minute to become hot, so just give it a second. The important thing with steaming is making sure you wash your face beforehand so you have clean pores, because the steam will open them up and then add moisture back into your face. I like to keep a towel near by so I can periodically wipe my face throughout my steam. I will also breath in and out to allow the steam to help with my congestion. If you’re like me and struggle with allergies, a steamer will become your best friend! One thing I also love about this steamer in particular is the mirror in the lid. I often use it post steam to extract blackheads from from my face. I sit in front of the steamer until it runs out which usually takes about 20 minutes. You don’t have to do the full time that’s just what I prefer. Once I am finished, since I use mine daily, I fill it back up with water for the next time I will use it.

Speaking of allergies, these eyelid wipes have been a game-changer for me! I struggle with dry and itchy eyes throughout the year and especially during allergy season, ever since someone recommended these to me I’ve been hooked! I use them throughout the day, but especially at night during my nighttime routine. It is a leave-on formula and you do as the package suggests, scrub your eyelid with one side getting into the corners and underneath your bottom lashes then flip it over and use the other side for your other eye. That’s it! There are also the Eyelid Allergy Scrub Wipes that are essentially the same thing but formulated specifically for allergies. I trade off between the two.

Next up is castor oil, which is great for hair growth! I like to use it on any areas around my hairline that I want to see a little more fullness or have a lot of baby hairs. In particular, I often use it on my eyelashes and have noticed a big difference in the length and fullness of my lashes. If you’ve followed me throughout quarantine you know I had eyelash extension leading up to quarantine because mine were very short and thin. I’ve tried magnetic lashes and fake lashes, but I’ve got to tell you, taking time to tend to my own lashes has seemed to really pay off.

Some nights I will use this serum in conjunction with the castor oil, while other nights I only use this serum. I love Dr. Laura Devgan’s serum! I’ve tried quite a few and honestly in my opinion, this is the best one out there. f you follow along on my Instagram Story you may also know how much I love the Dr. Laura Devgan Platinum Lip Plump. Run, don’t walk to get yourself a tube of that asap!

Once I’ve made it to bed one of my last steps is applying a cuticle oil. Again, if you’ve followed me during quarantine you know my distain for cuticles! This oil really helps soften my cuticles that have seemed to get longer and thicker with time. After applying this oil consistently I’ve been able to maintain shorter softer cuticles which is such a stress relief for me. If you need softer cuticles or tend to pick at or bite your cuticles, definitely give this oil a try.