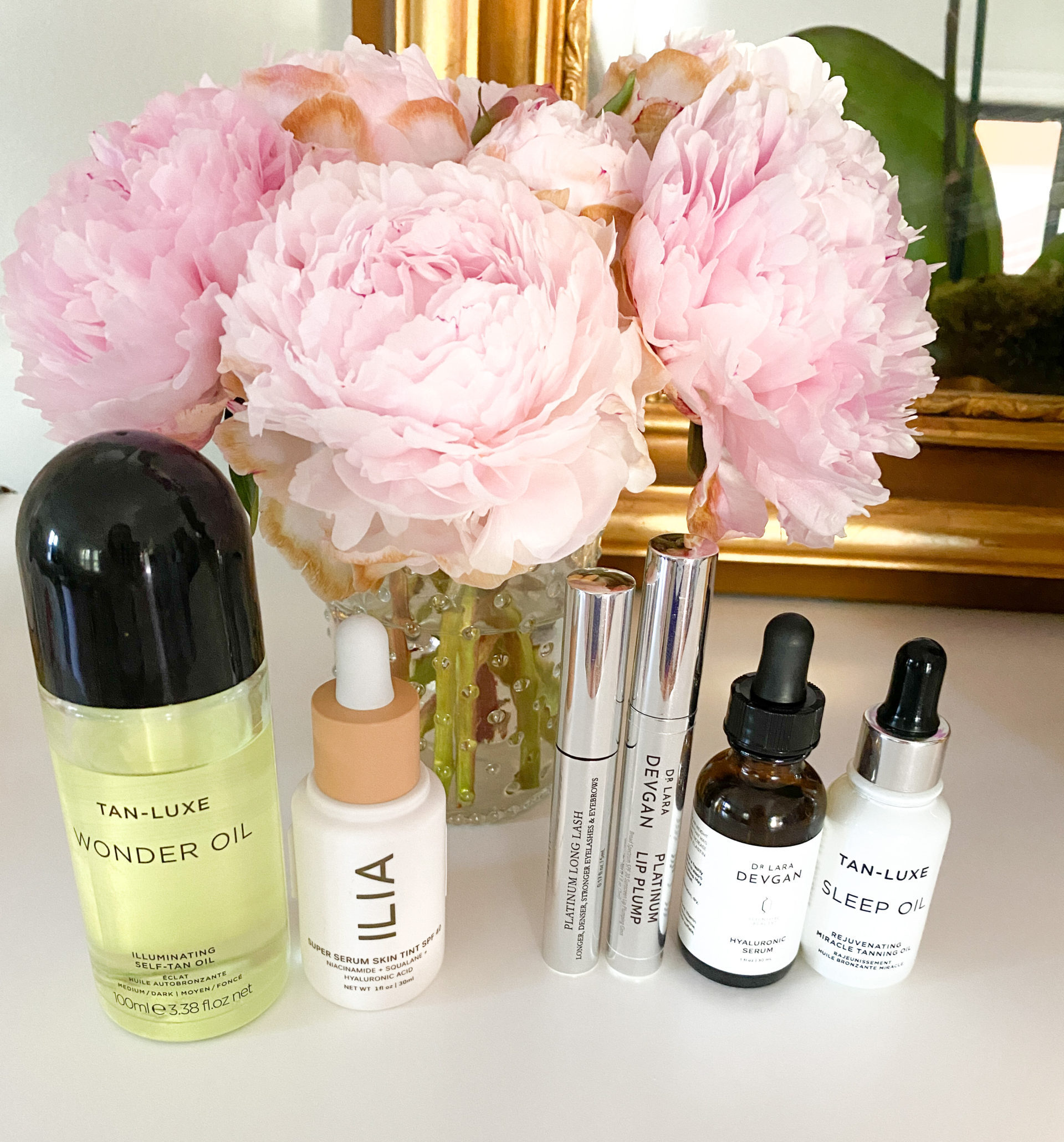 I got some new beauty products over the last month or so and wanted to test them out before doing this post so you can trust that these are all good recommendations!  Also I wanted to be transparent and let you all know that I bought all of these products myself with my own money and none of this is sponsored.  I’ll go into detail on each product down below but I want to give a couple of backstories first so you can better understand some of them.

First of all, I still love and use my ride or die tanning mousse, Loving Tan, but I usually only use it about once every two weeks and I was looking for some other tanning items that are more of an every other day kind of thing.  I have used just about everything under the sun but for some reason I had never tried any of the Tan-Luxe line despite hearing great things about it.  I can’t remember who, but someone I follow on IG was raving about the wonder oil and I was like yeah right that stuff is probably a greasy mess.  A few nights after that during one of my late-night Ambien shopping fits something came over me and I ordered it along with some other Tan Luxe items 😛

Okay, that sets the stage for the Tan-Luxe, now let’s set the stage for the Dr. Devgan products.  Ok, so I follow a ton of dermatology, skincare, and plastic surgeon IG accounts because I always want to be in the know and I just find all of that so fascinating.  I came across Dr. Devgan’s IG account around 3 years ago and really loved watching her videos and seeing her before and after photos of her procedures.  Fast forward to a few months ago and I noticed she was talking about starting her own skincare line, which of course piqued my interest.  Initially her line was only available on her website but this month she launched a few of her products at Sephora.  I will go into more specifics of the products that I ordered and use below.

Alright, you’ve made it this far … now let’s talk about my search for a clean beauty foundation.  I’m not trying to be one of those people who is like OMG TOXIC FREE LIFE because obviously I get botox and love medical grade skincare, but over the past few months when I wear makeup my allergies become 10 times worse and it sometimes triggers a migraine.  I didn’t really make the connection until I randomly googled “can makeup give you a migraine” and I was shocked to learn that a lot of eyeshadows, liners, and foundations cause people issues.  I figured I’d start with a foundation so that’s when I read a lot of great reviews on the Ilia Skin Tint Serum.

Tan-Luxe Wonder Oil– this is my new favorite tanning product for a couple of reasons, the first being that it doesn’t smell strong like other tanning products.  The second reason is that the color is a nice deep tan without looking streaky.  Listen y’all, I’ve used a lot of sunless tanning products in the past and I’ve never had one stay on my skin as long as this wonder oil.  It has been lasting me a solid two weeks.  It does get splotchy when it starts to come off after those two weeks, but I just love the fact that it has staying power.  I did a test when I first got it in and used it only on my legs and this is my leg compared to my arm (no tanning products) after two weeks: 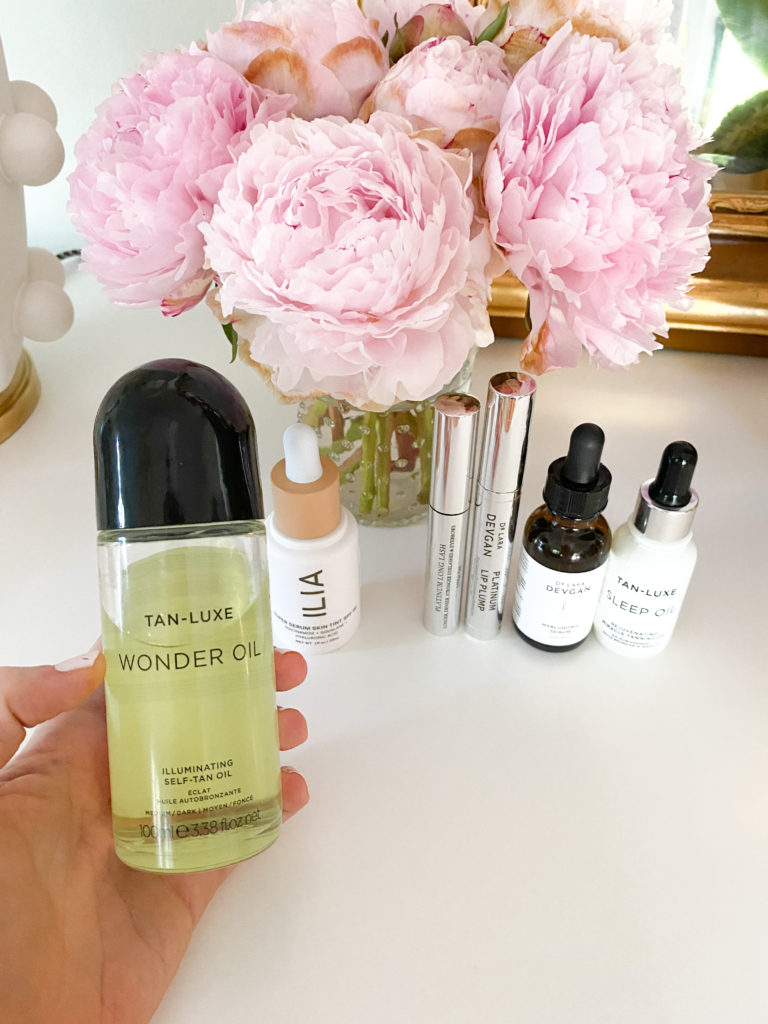 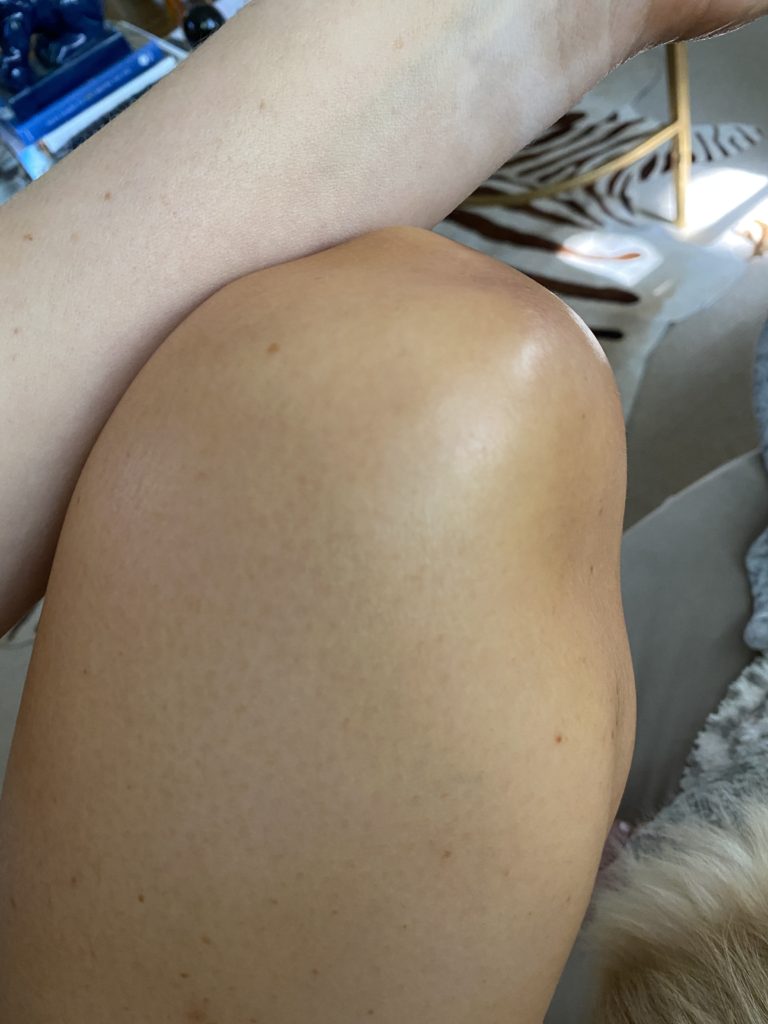 Tan-Luxe Face Sleep Oil– I’m sure face tanning products are just a ploy and most are probably the same formulation as their “body tanning” counterparts, however, I always fall for it and feel like I need separate tanner for my face.  I like this sleep oil because it feels nourishing and gives a nice color and glow.

Dr. Devgan Platinum Lip Plump– I saw a lot of raving reviews for this lip plumping gloss and tons of before and after pictures that frankly, looked too good to be true, but of course I was curious and had to try it! I was shocked at how well it worked and how it made my lips look bigger within minutes of applying it.  It contains Niacin which gives the lips a really nice and subtle coloring.  I’d say that the effects of the Lip Plump lasted around an hour or two for me personally.  It sells out quickly so be sure to get on the waitlist or catch it when it comes in stock.  My before and after picture is below: 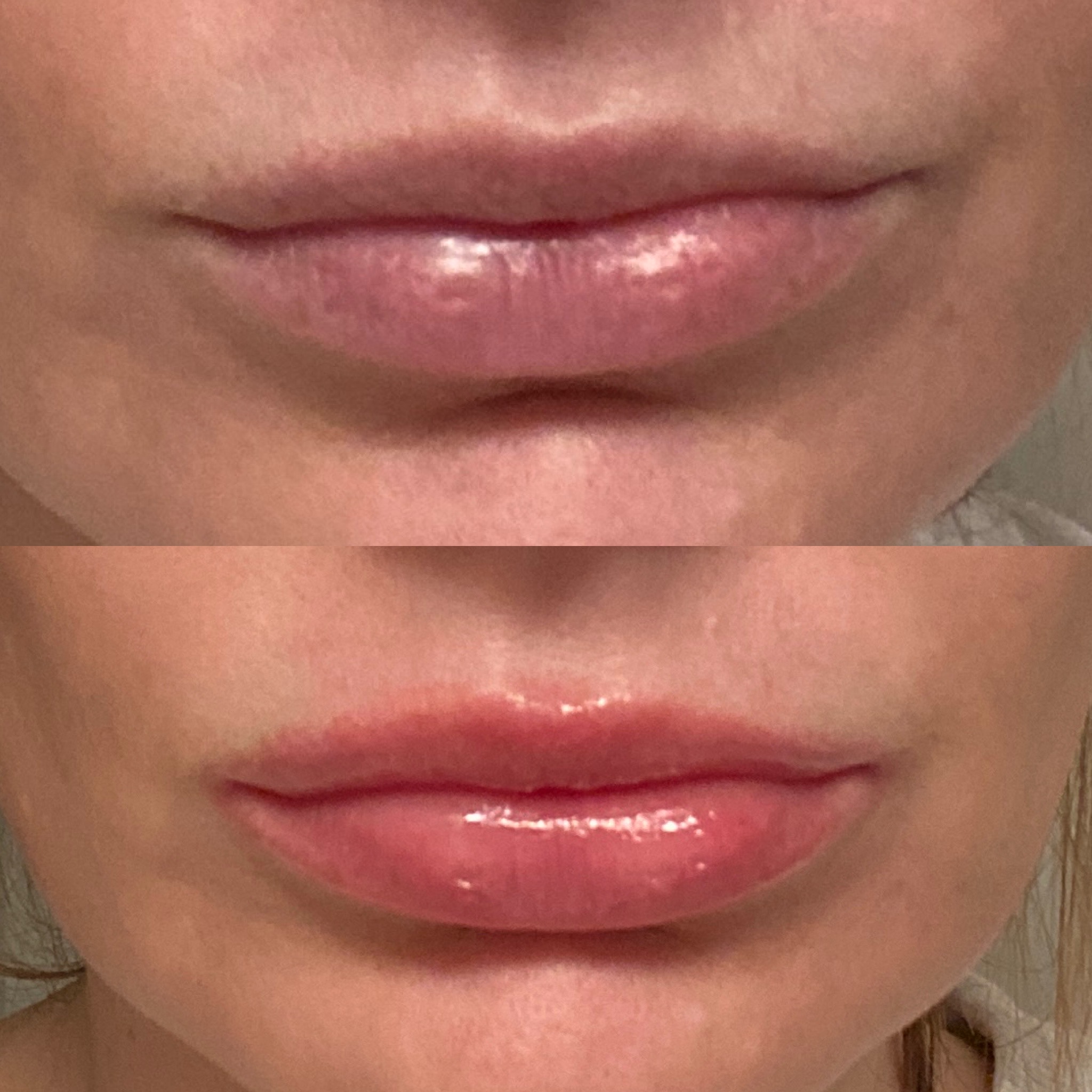 Dr. Devgan Platinum Long Lash– ever since I stopped getting lash extensions I have been trying to grow my natural lashes but most of the time I can’t handle how lash growth products cause eye irritation.  I have been pleasantly surprised with the Dr. Devgan lash serum because it doesn’t seem to cause any irritations for me which says a lot because I feel like these days anything causes issues.  I will be sure to give an update and post before and after pictures once I use it for a little longer. 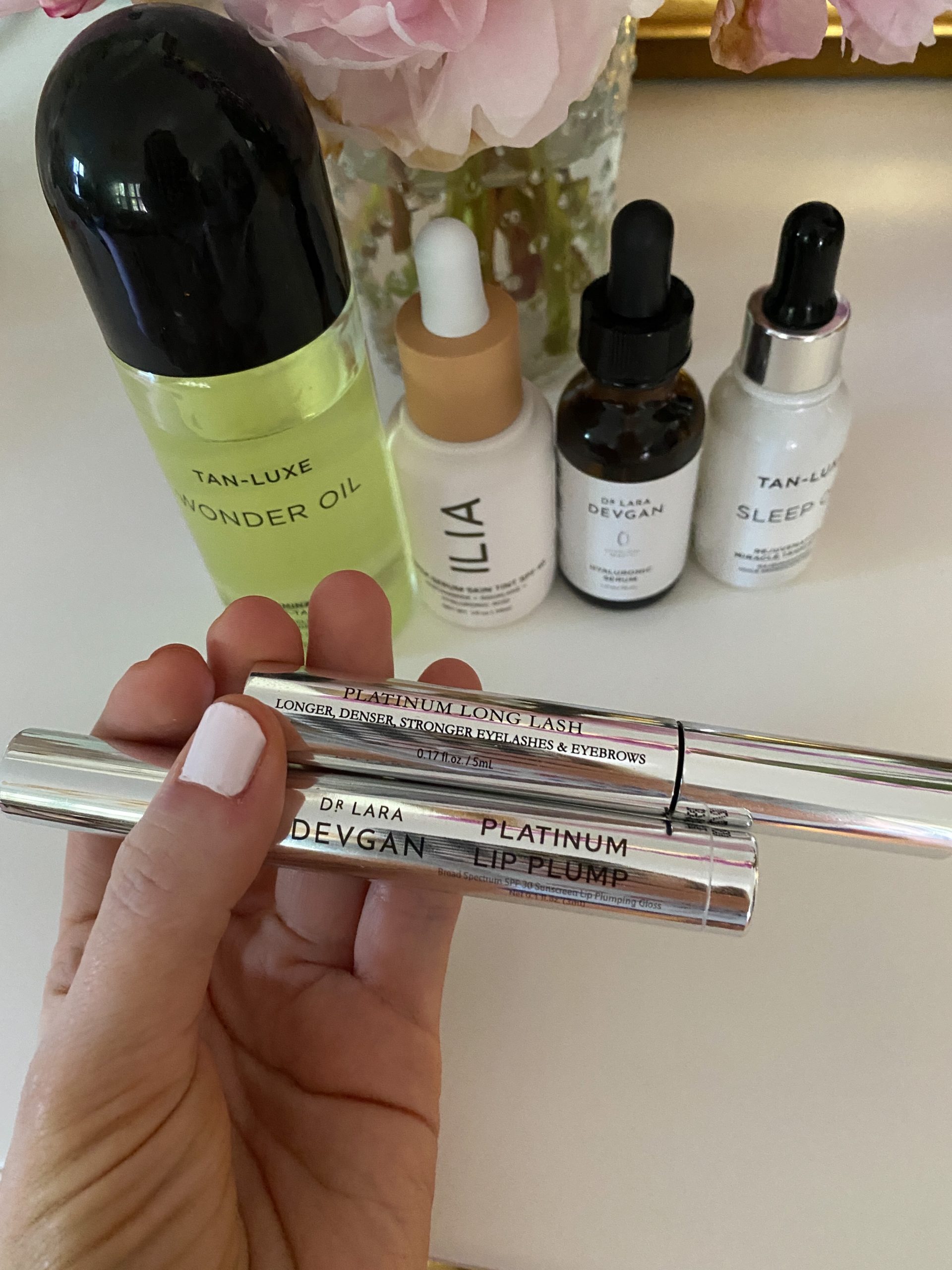 Dr. Devgan Hyaluronic Serum– Hyaluronic Acid is one of the best things you can use for your skin to plump and moisturize as you age.  I will say that not all hyaluronic products are equal, and I’ve used several that don’t seem to do anything.  I have been using the Dr. Devgan Hyaluronic serum after cleansing and in place of a moisturizer.  Since using it I have noticed my skin is smoother and looks more glowy.

Ilia Super Serum Skin Tint – As I shared in the intro of this post, my allergies have been progressively worse lately and I feel like I am becoming more and more sensitive to all products in my life: household products, makeup, skincare, etc.  The past few times I’ve worn makeup I’ve had red itchy eyes and a headache so I figured it can’t hurt to try a foundation that is considered “clean” to see if that helps.  The Ilia Super Serum had great reviews and I like that it isn’t super thick or heavy, especially since it’s so hot during Memphis summers.  I’ve only used this once and really liked it, but I will test it out a little longer and keep you all updated. 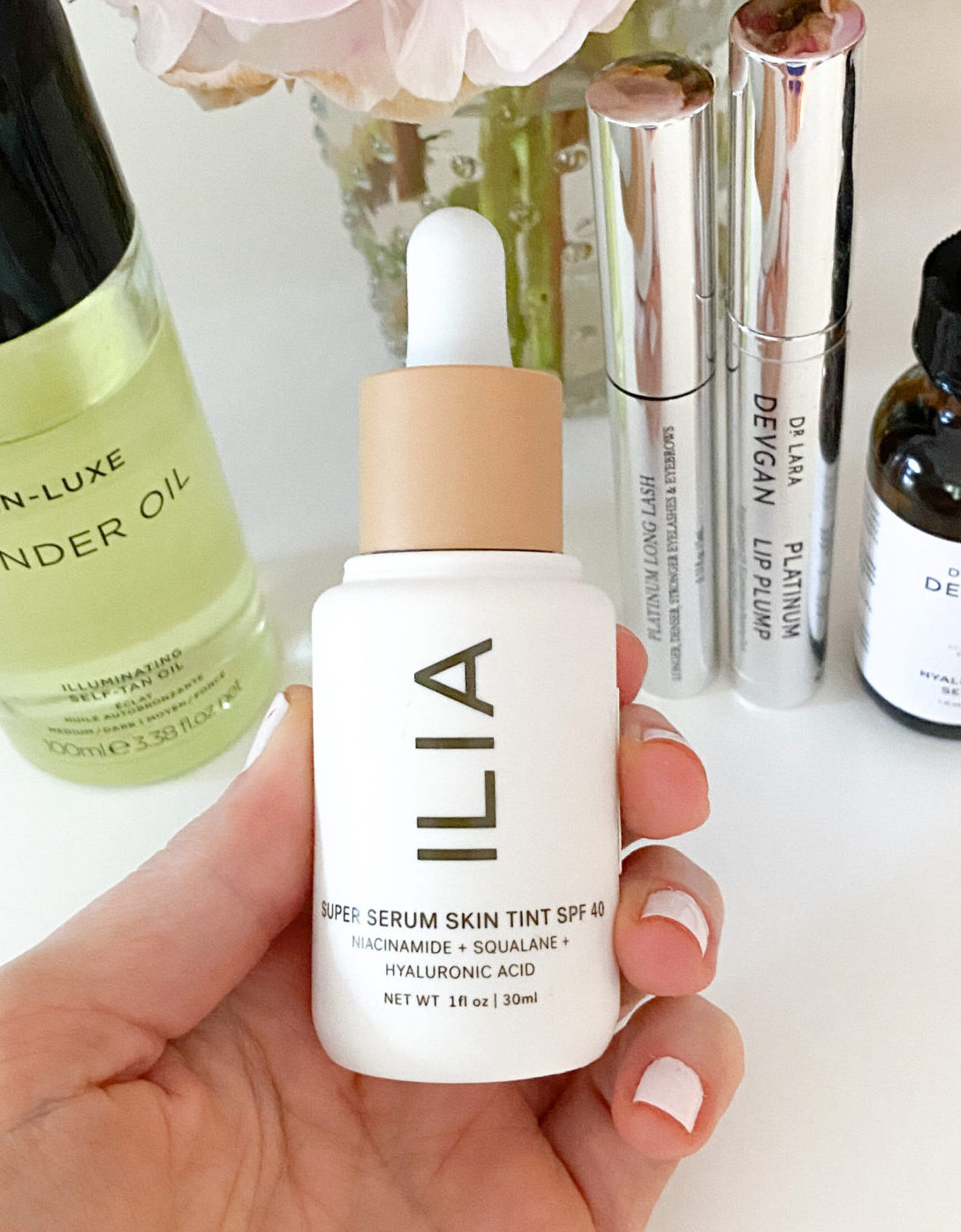