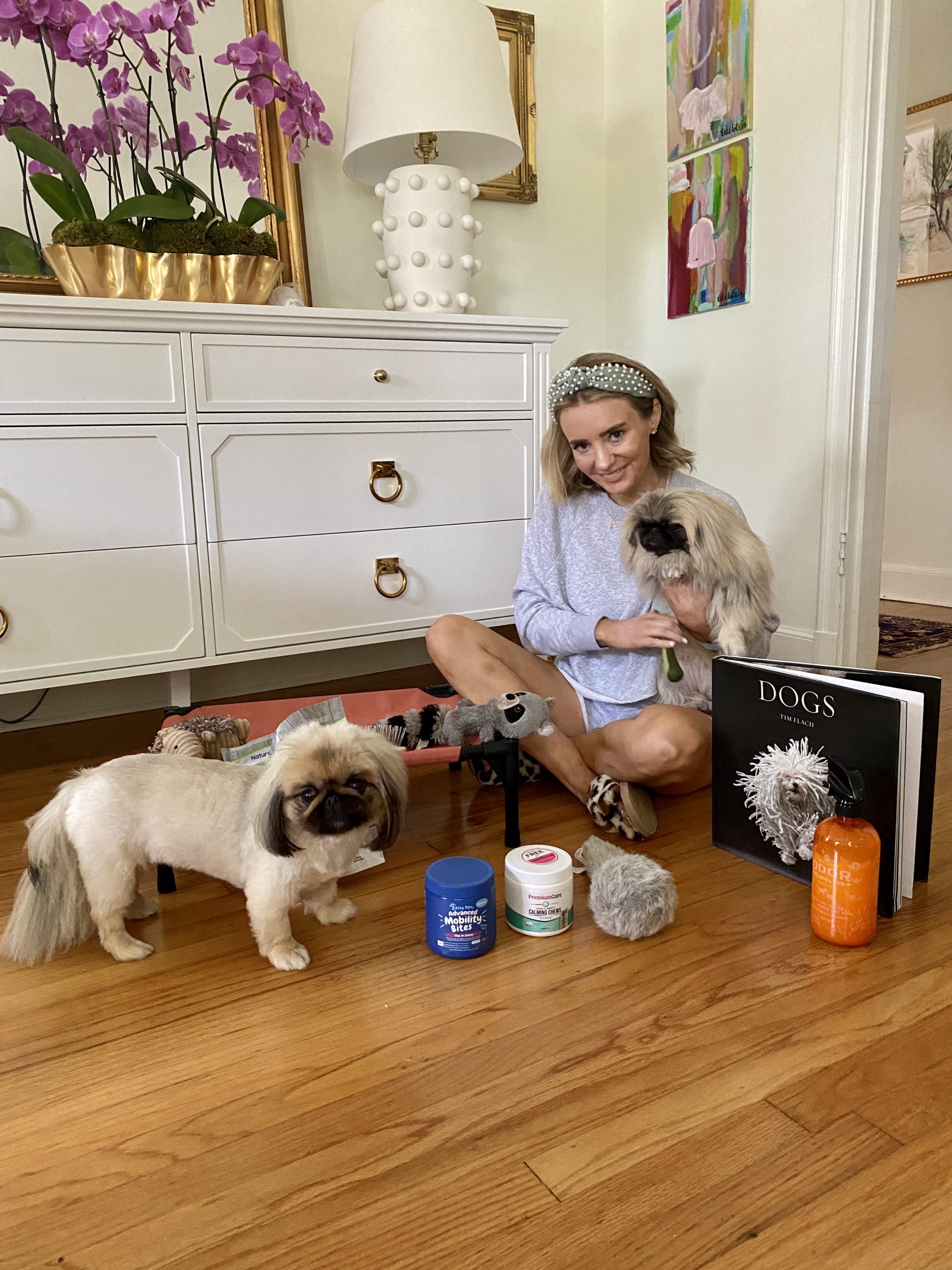 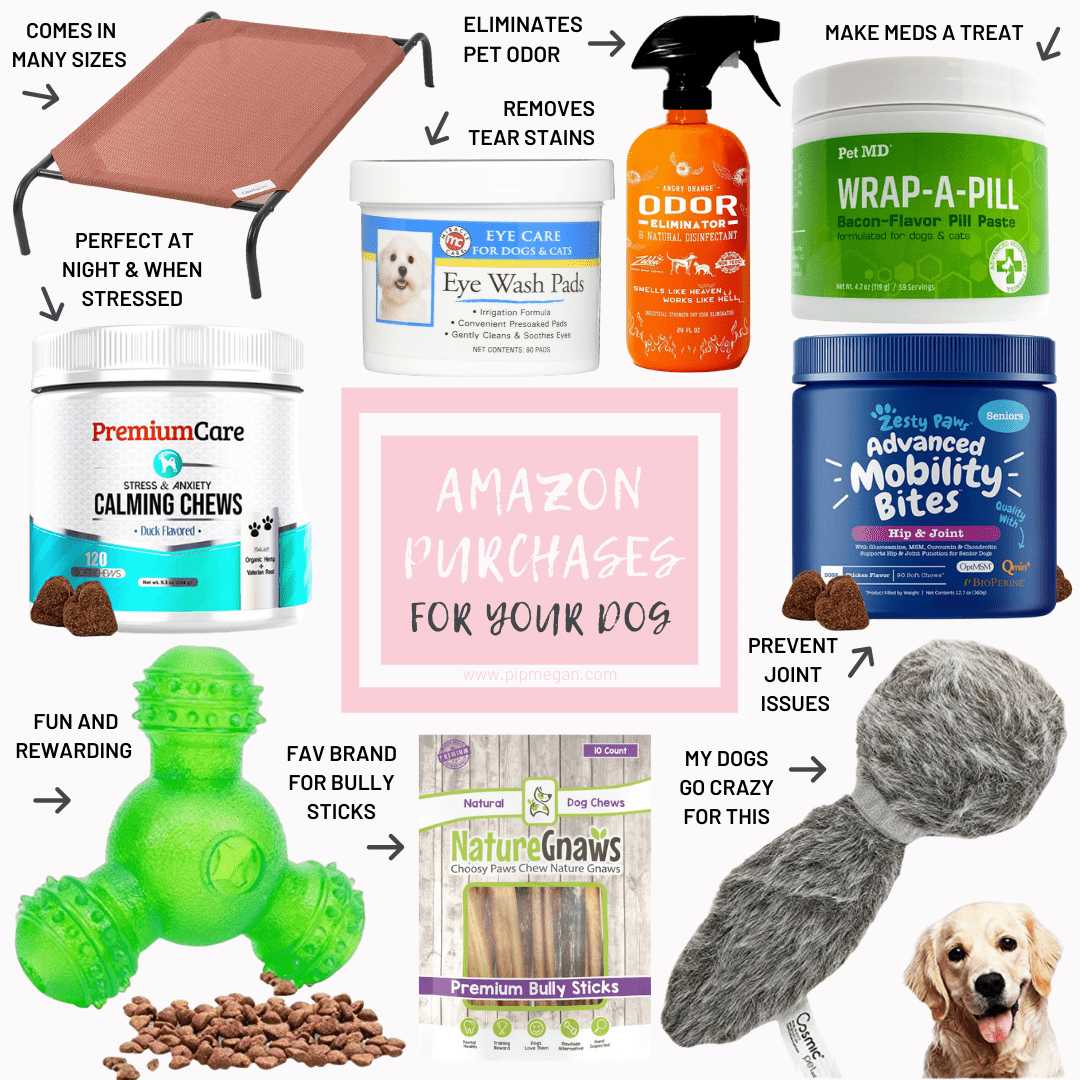 Today is National Bring Your Dog to Work Day and it just so happens I’m working from home, as I’m sure many of you are still stuck doing as well. I say “stuck,” but when you’re surrounded by your fur babies it really isn’t so bad at all. Today I’m sharing all of my must-have items I order on a regular basis off of Amazon to keep our dogs happy and healthy. You can shop all of these items directly on Amazon from my Amazon Storefront HERE. If you have go-to items for you pups comment below or on my most recent Instagram post, I of course need to add it to my cart as well.

Zesty Paws Mobility Bites: These are great to give your dogs every day to prevent any joint issues as they age. If you haven’t been giving them anything like this up until this point I would just suggest asking your vet what they would recommend you do and then I typically find the supplement on Amazon.

Premium Care Calming Chews: My dogs love these and have grown to expect them every evening so much so, that if I haven’t given them one by a certain time they come begging for one. These are also great if you know you’re dog is going to be in a stressful or high-anxiety situation such as fireworks or traveling. With 4th of July coming up I strongly recommend you order these if your dog is not a fan of fireworks or loud noises.

Nature Gnaws Bully Sticks: There are always three or four of these scattered throughout our house at any given time. My dogs love chewing on them and they are really good for their teeth. I like that they do not get gummy and I don’t have to worry about whether they may choke on a piece. If your dog is a chewer or tends to get board, I recommend you try these out.

Pet MD Wrap-A-Pill: Does your dog refuse to take medicine? Try these pill wraps! They come in a few flavors and your dog will simply think they are getting a treat! This particular brand and the bacon flavor have worked really well for us. My dogs are fooled every time.

Hyper Pet Dog Tail Interactive Dog Toy: If you watch my Instagram stories then you have likely seen this toy in action. My dogs go crazy over this thing! It’s pretty hilarious to see it moving around the floor and watch them follow it around. If your dog is intrigued by movement and likes chasing things, then he/she will probably enjoy playing with this toy and be entertained for a long time.

Macoodie Interactive Dog Treat Toy: This is another great toy to keep your dog busy and also tire them out mentally. Because they smell the treats are trying to figure out how to get them out of the toy they are using a lot of brain power. Once they’ve achieved this and received the reward of the treat, they are often pretty tired and ready to chill out for awhile.

Miracle Care Eye Wash Pads: Our older dog Apple’s eyes get pretty watery and need to be cleaned fairly often and this product has been great for cleaning her face. Her fur is dark so you can’t really see her tear stains, but if you have a dog with lighter fur and are noticing tear stains then you should definitely check out this product.

Coolaroo The Original Elevated Pet Bed: Our dogs love laying on this bed! Especially our youngest girl who tends to get hotter than the rest. It’s a very supportive bed, is easy on their joints and the surface stays pretty cool. There are various size options depending on your dogs weight/size.

Angry Orange Pet Odor Eliminator: I love this odor and stain remover! The smell is like fresh oranges. I use it all the time for any messes in the house and it has been working really well.

Chris Christensen Oval Pin Brush: If your gos has long unruly hair then you need this brush. It’s great at getting out tough tangles and my dogs actually enjoy it when I brush their fur with using this brush.