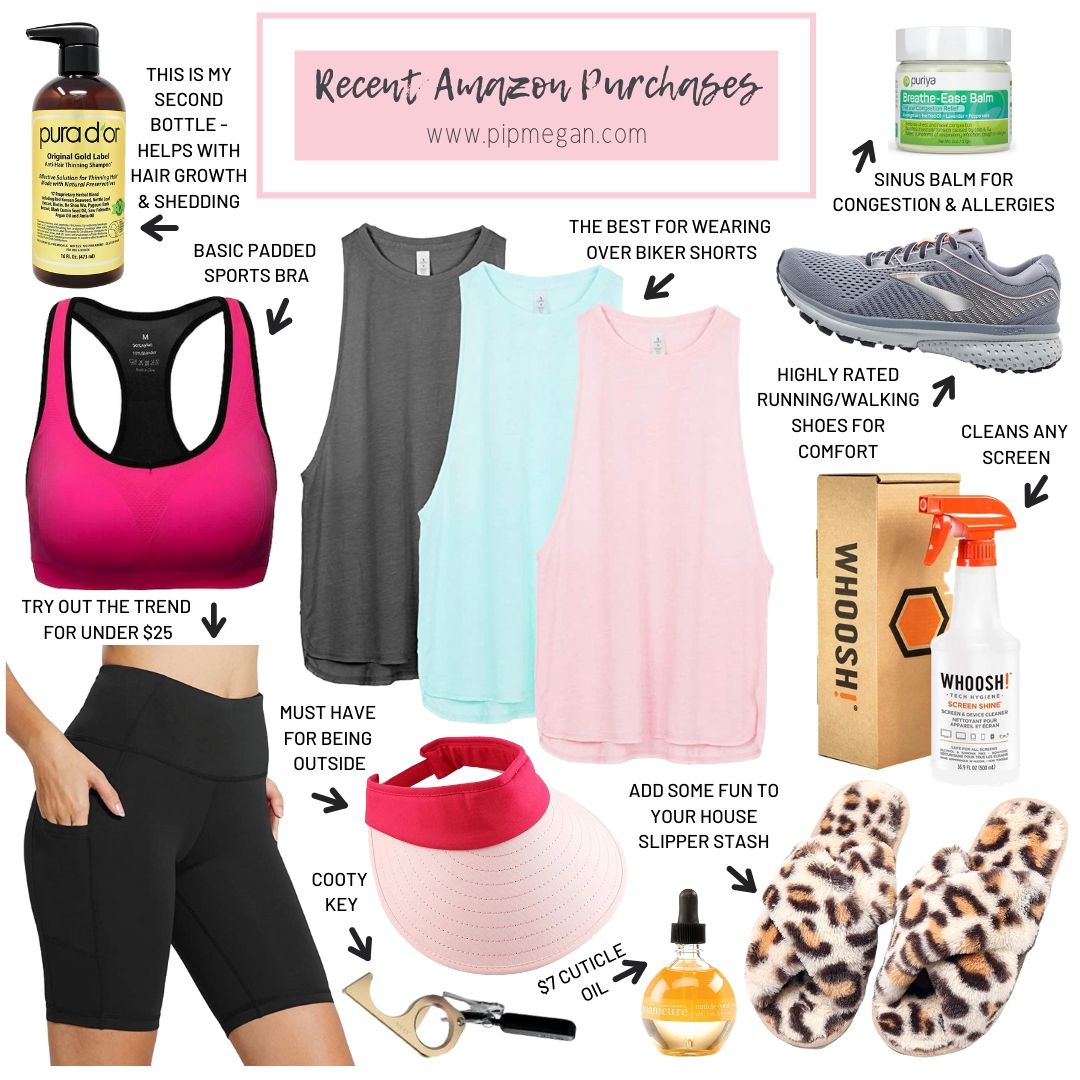 Another fun and random Amazon haul coming at you including everything from a cooty key to some sinus balm for congestion and allergies.  I’ve been trying to get outdoors more and do my daily walks, but the sun and allergies just kill me!  I’ve now got about 4 different sun-hats depending on my mood and I’m going to try out the biker short trend with an athletic version to wear with oversized tanks and sports bras.  Here’s a little bit about each item in today’s post and why I think you should check it out:

Pura D’Or Hair Growth Shampoo: I think I purchased my first bottle of this shampoo back in the fall and I just now had to get a second bottle.  The Pura D’Or shampoo claims to be anti-thinning with several key ingredients such as biotin, argan oil, and natural DHT ingredients.  I know the main claim is anti-thinning, and I definitely think it works to stop shedding, but I also think it helps with hair growth and I have seen a difference after using it consistently for a few weeks.  I like to lather it up on my scalp and then use my scalp scrubber to push the ingredients way down into my scalp.  If you don’t have a scalp scrubber you need one – I love mine and it makes my scalp feel squeaky clean.

3 Pack of Basic Padded Sports Bras: I am such a simple person when it comes to sports bras.  I don’t want any of that fancy crap with 16 straps and mesh cutouts to show your boob cleavage.  Give me the basic two strap padded sports bra any day over the snazzy ones.  I love these sports bras because they come in a 3 pack and they are perfectly padded as to not have too much padding, but just enough so you don’t see any nips 😛

3 Pack of Oversized Sleeveless Tanks: Ok, we’re gonna talk about biker shorts on down the post, but the most important thing with biker shorts or really tight leggings for that matter is that you want to wear a shirt that is oversized and will cover your front and back.  The camel toe is not a good look and these oversized sleeveless tanks are long enough to cover everything and have big cutouts on the sides so you can wear your sports bra and look all trendy.  I love the variety of colors available and can’t wait for mien to come in!

Breathe-Ease Sinus Balm: Jesus take the wheel my allergies have been SO bad the last couple of weeks.  I have ALL of the allergy meds and gadgets, but this sinus balm is something that I haven’t tried so I figured what the heck.  This breathe easy formula contains peppermint, eucalyptus, tea tree, and lavender in a nice balm consistency to put on your sinuses, chest, and even under your nose.  I’m super excited to try this stuff when it comes in!

Brooks Ghost Running Shoe: I’ve been wearing the same pair of paper thin nike shoes for the past two years and it’s gotten so bad that there’s now a hole where my big toe is 🙂 I don’t know why, but sneakers just aren’t on my list of things that I get excited about purchasing.  I have been seeing a lot of buzz around this Brooks brand, mostly because of how comfortable they are, so I decided to give them a try for my power walking around the neighborhood.  I actually ordered the 6.5 and they came in and were too small, so I reordered a size 7.  These aren’t the most attractive looking shoes, but I’m all about comfort these days so I’ll sacrifice style for comfort.

Whoosh Screen Cleaner: my poor computer, iPad, and cell phones.  I have been blasting them with bleach, antibacterial wipes, wet one wipes, multi-surface cleaner, etc. for weeks.  I wouldn’t be surprised if I’ve damaged some of my electronics because of my OCD cleaning tendencies and using hard products on screens.  I saw this Whoosh Screen Cleaner on someone’s stories a couple of weeks ago and decided to try it out since my screens are always so dirty.

Athletic High Waisted Biker Shorts: alright, Biker shorts are back with a bang this year and given that most of us have been wearing some form of sweatsuits for the past two months, these actually fit in pretty nicely to our athleisure wardrobe! I was very anti-biker shorts last year, but I am a changed woman and will be embracing them with open arms when they arrive this week.  Here’s the thing about biker shorts – just say no to the toe … camel toe, that is!  You want to make sure to get a thicker, more athletic pair to prevent the dreaded camel toe, and be sure to wear a shirt or tank long enough to cover the front and back.

Oversized Sun Visor: I now have this exact visor in pink as well as white and I wear it pretty much every night when I go out for my daily walk.  I am so paranoid about the sun and wearing a ball cap just wasn’t cutting it, so I opted for this huge oversized visor and it keeps the sun off my face and most of my neck.  It’s really comfortable to wear and has an adjustable velcro strap on the back.

Germ Key/Cooty Key: I have been wanting one of these things for weeks and since more and more people are venturing out into the world I figured no time like to present to “add to cart”.  These anti-microbial gadgets attach on to your keys and you can use it to open doors, punch numbers on a keypad, open your car door, and so much more.  I got the rose gold option but they also come in gold and silver.

Milk & Honey Cuticle Oil: My cuticles are so dry and nasty and I was on the hunt for a good cuticle oil that would condition and nourish them at night.  This cuticle oil that I got from Amazon smells SO GOOD – the scent is technically milk & honey – and it makes your dry cuticles disappear overnight.  I actually like to apply to my cuticles and then take some more and apply it like a hand cream all over my hands.

Leopard Print Fuzzy Slippers: as if I don’t have enough fuzzy slippers, I decided to add another pair to the mix and this time it’s a leopard pair!  Fun right? I seriously live in house slippers and this criss cross design is definitely my favorite that i’ve worn lately.  I can’t wait to put these on with some sweatsuits and post up on the couch to watch Netflix 😛

What’s your favorite random item from today’s Amazon purchases post? I think mine is definitely the Germ Key – I can’t wait to get that in and start using it to do everything 😛