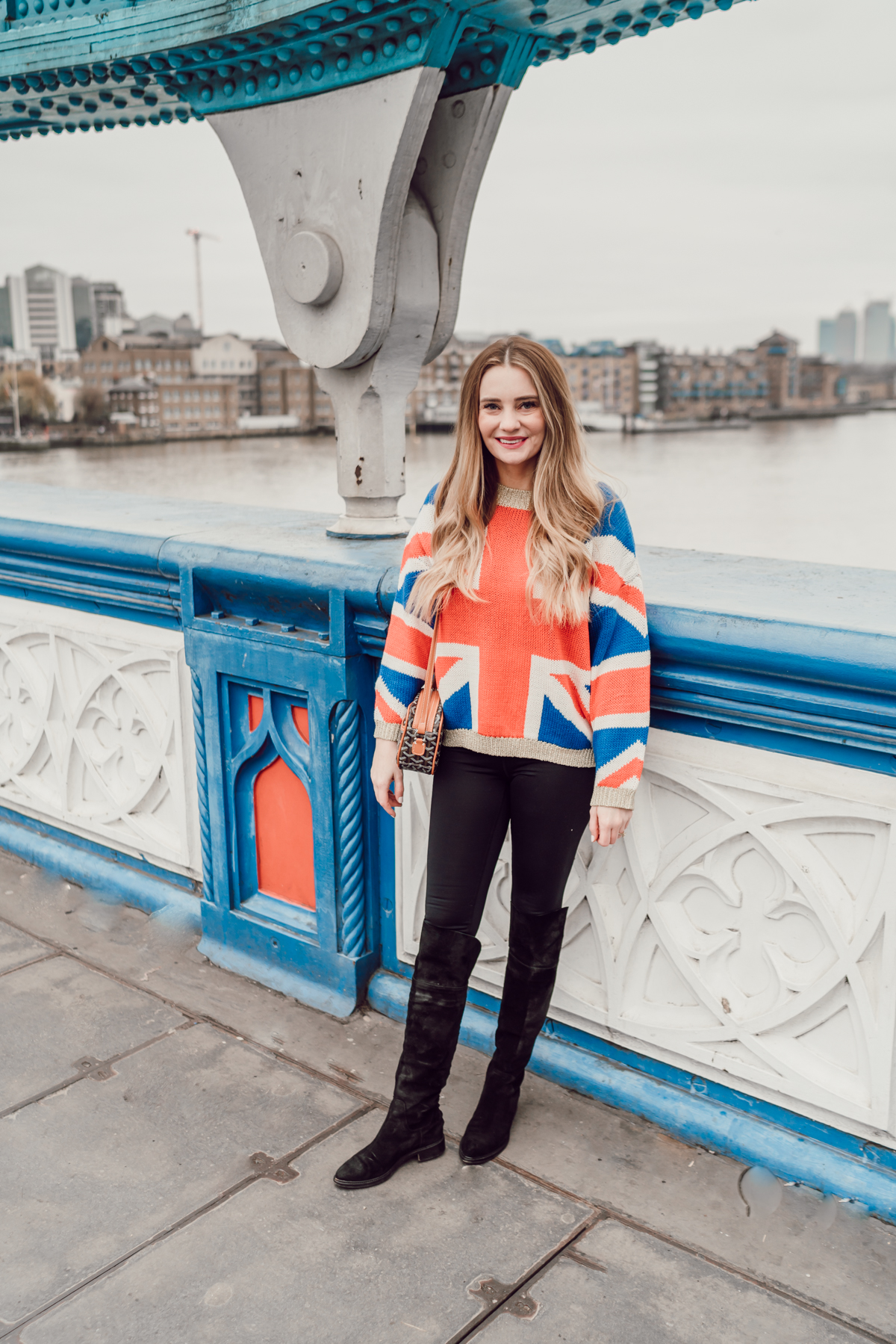 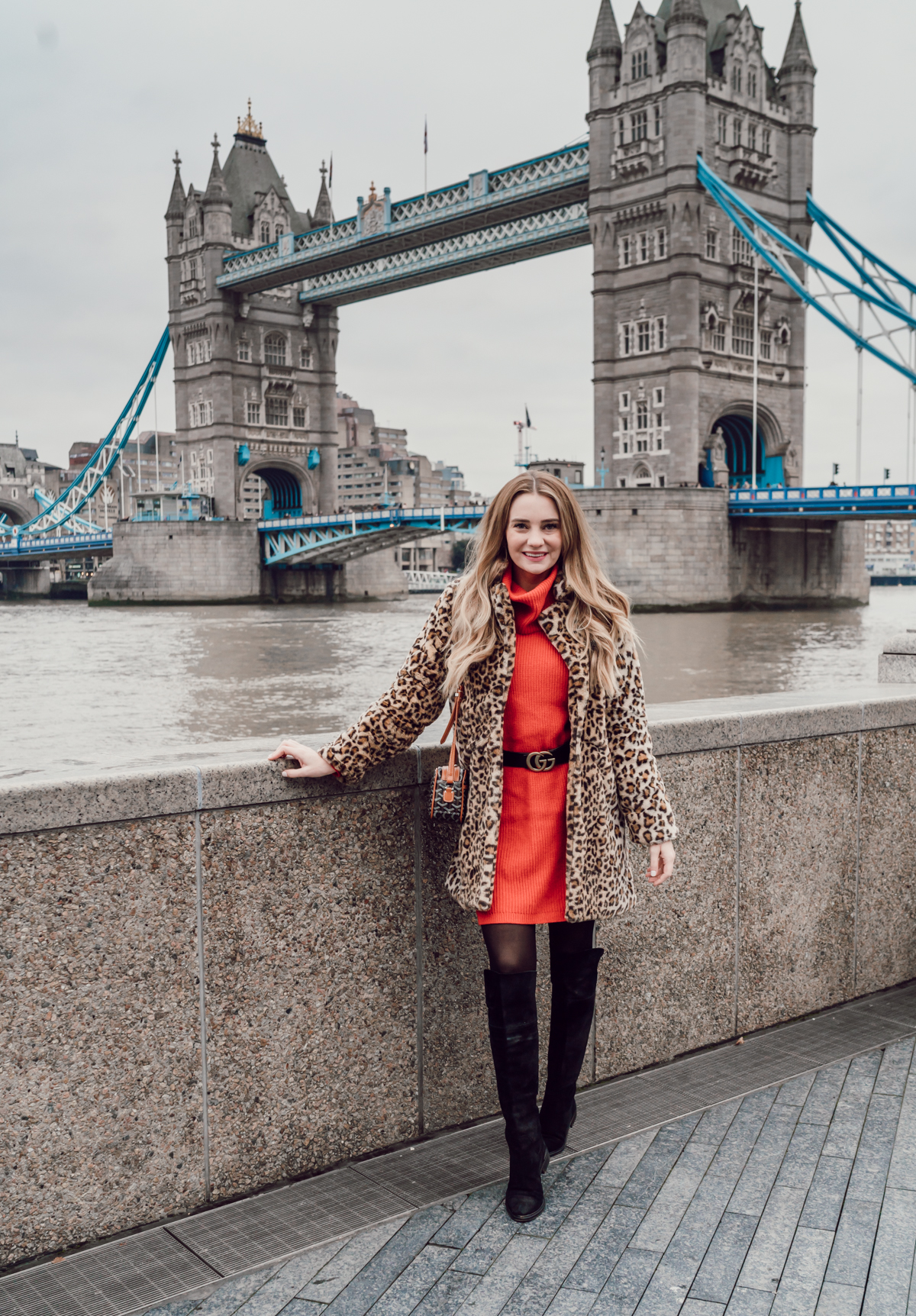 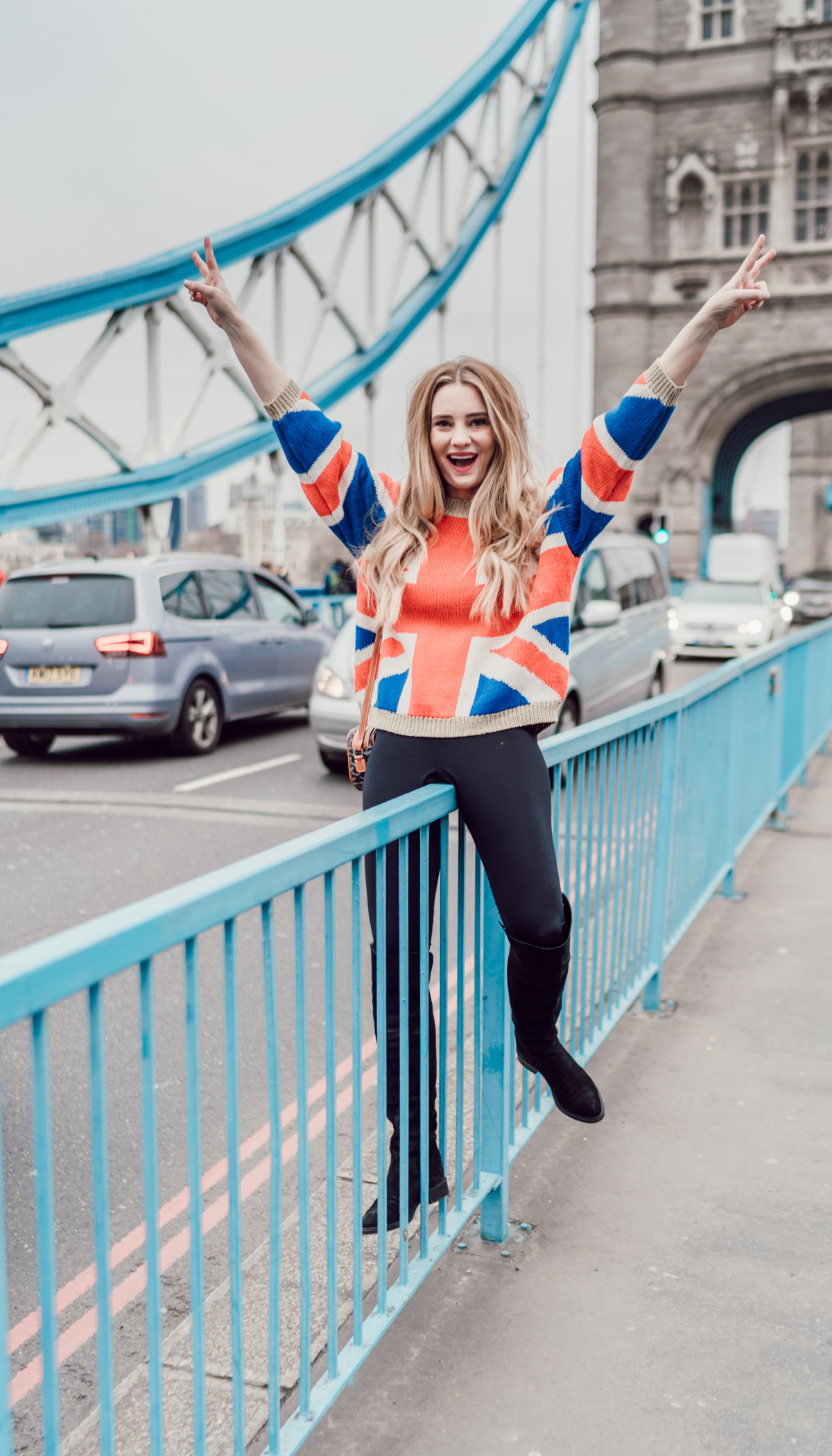 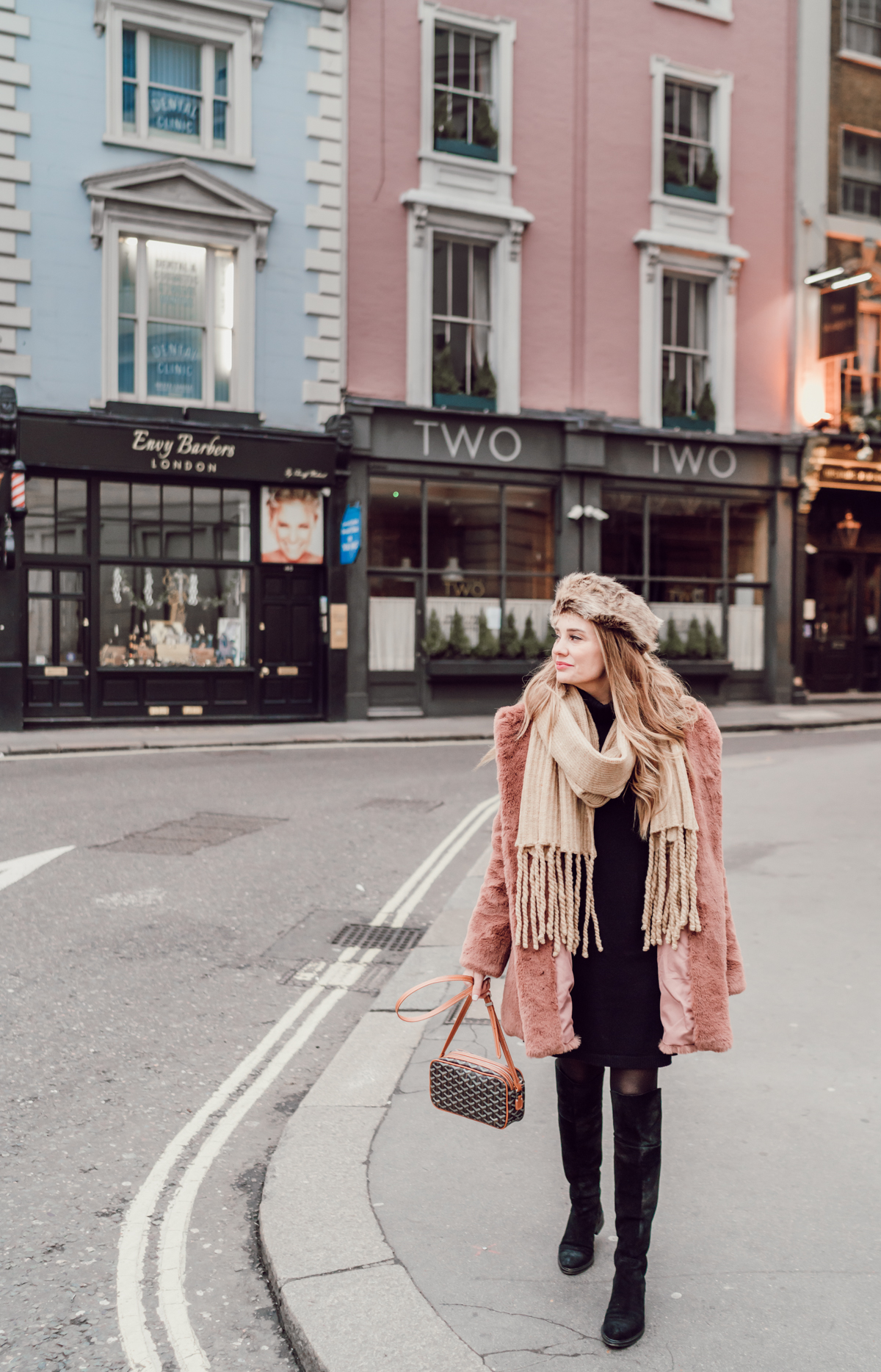 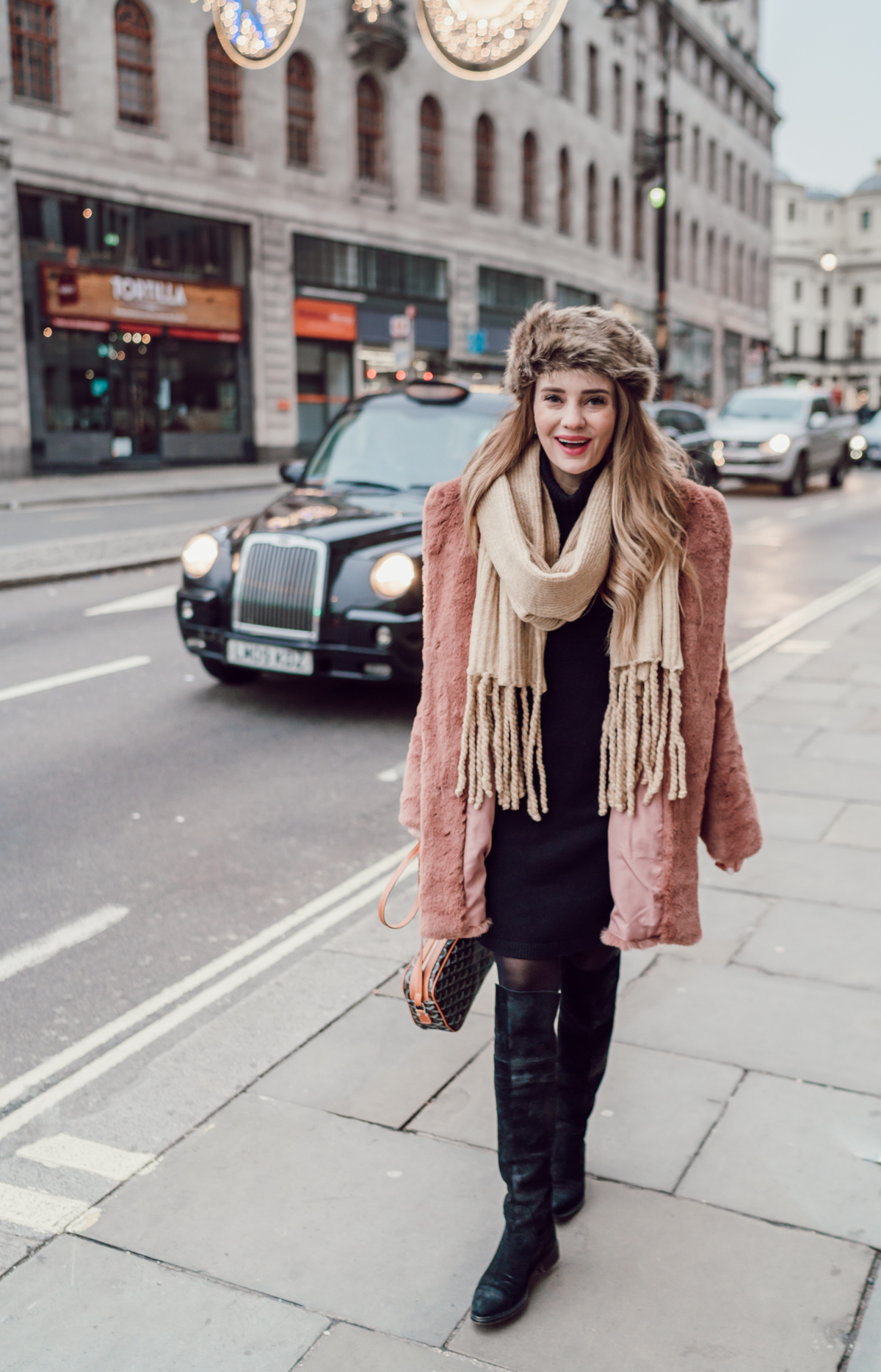 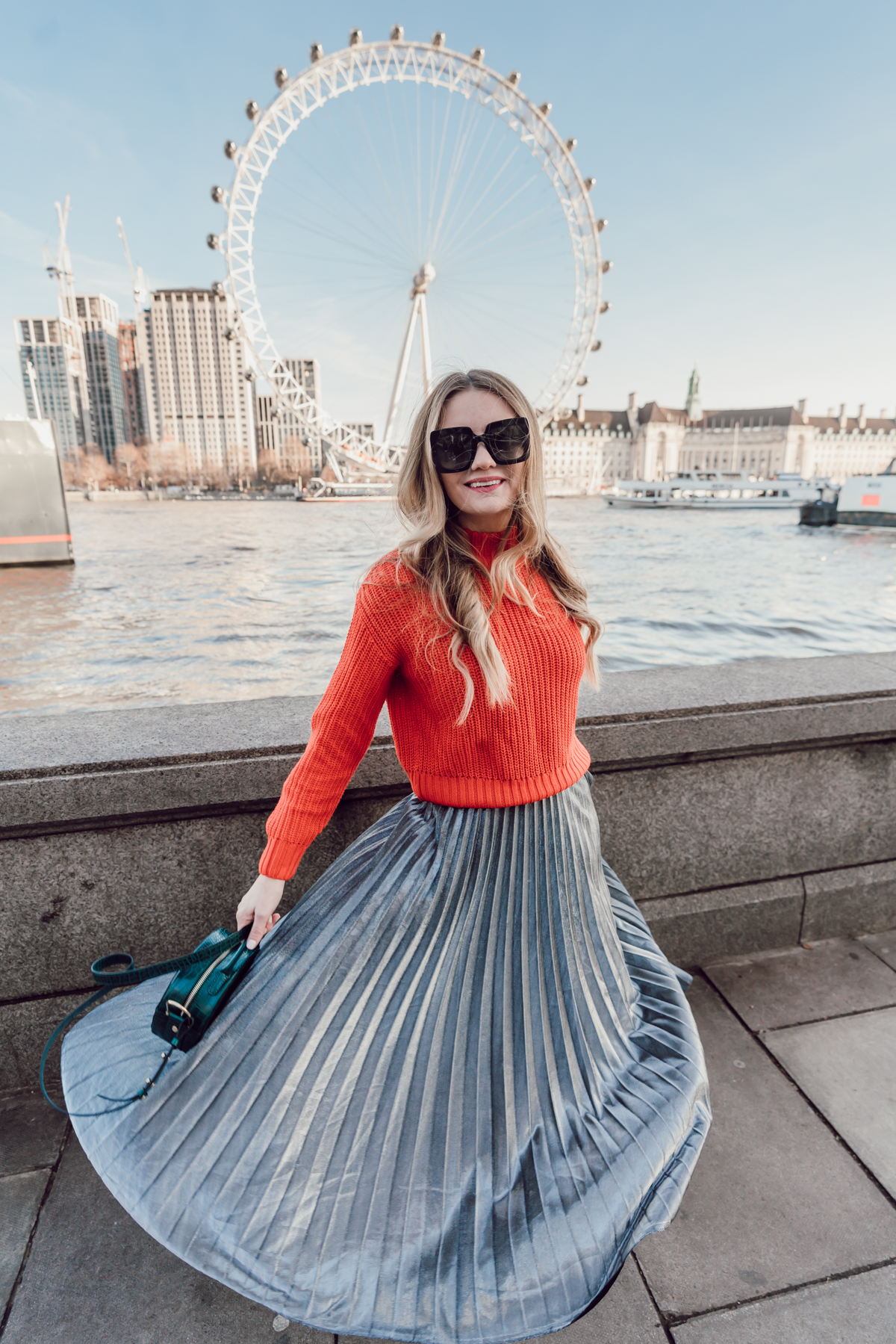 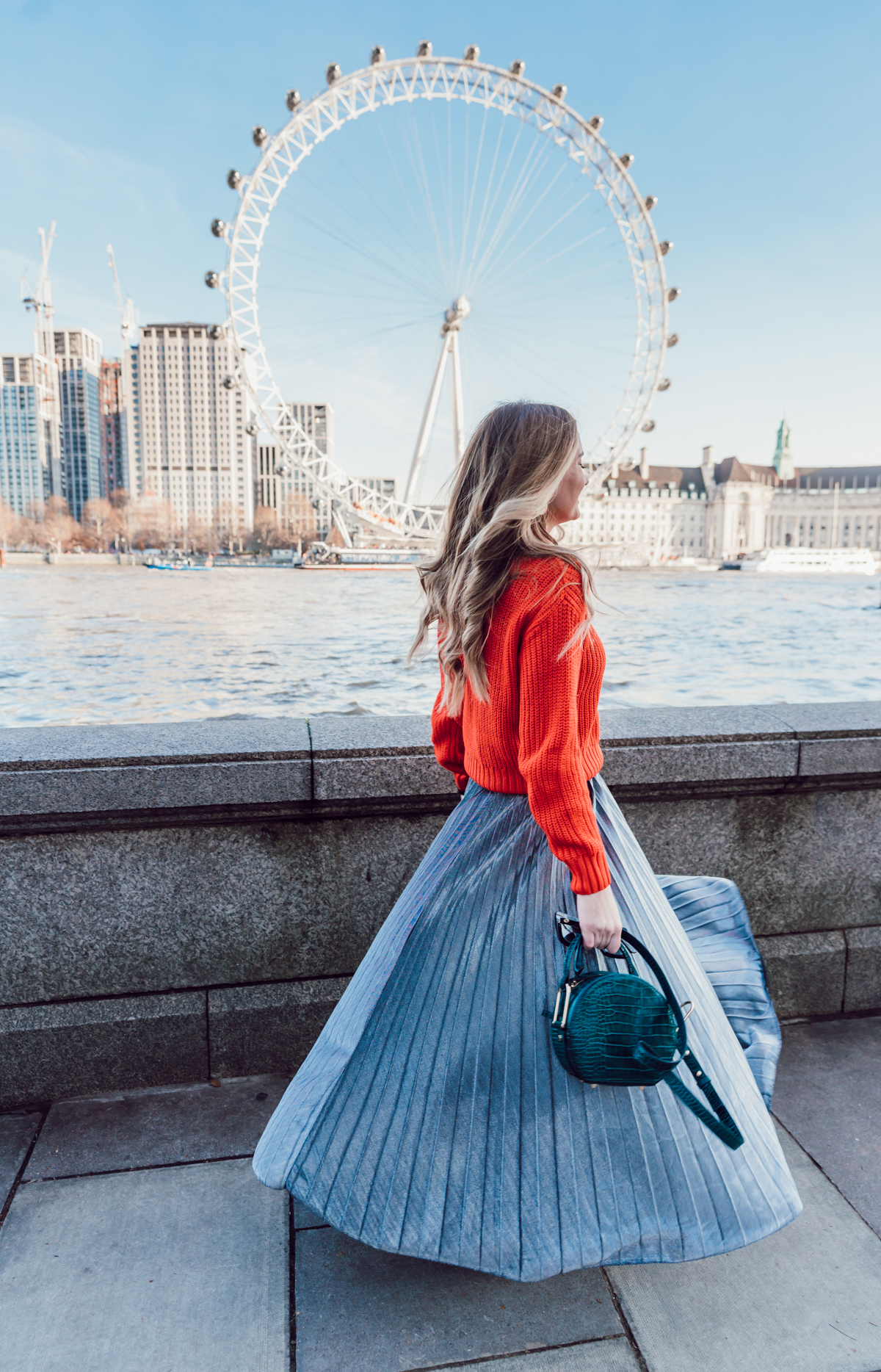 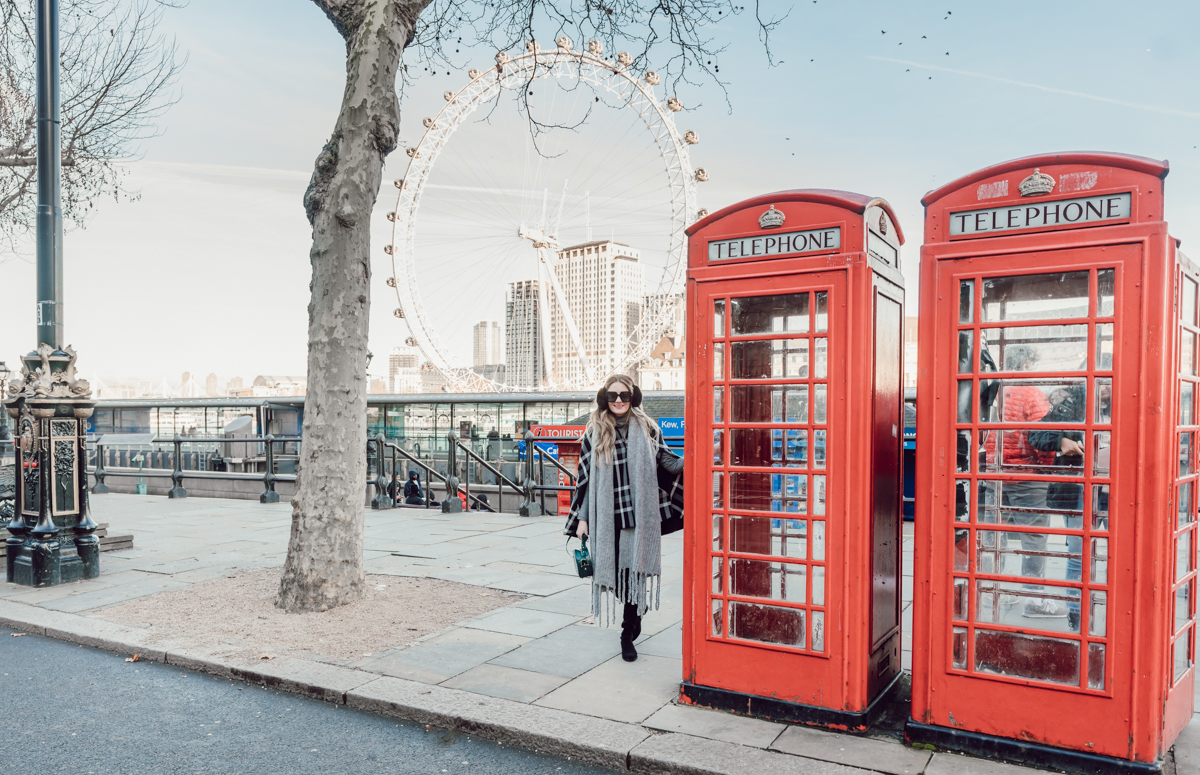 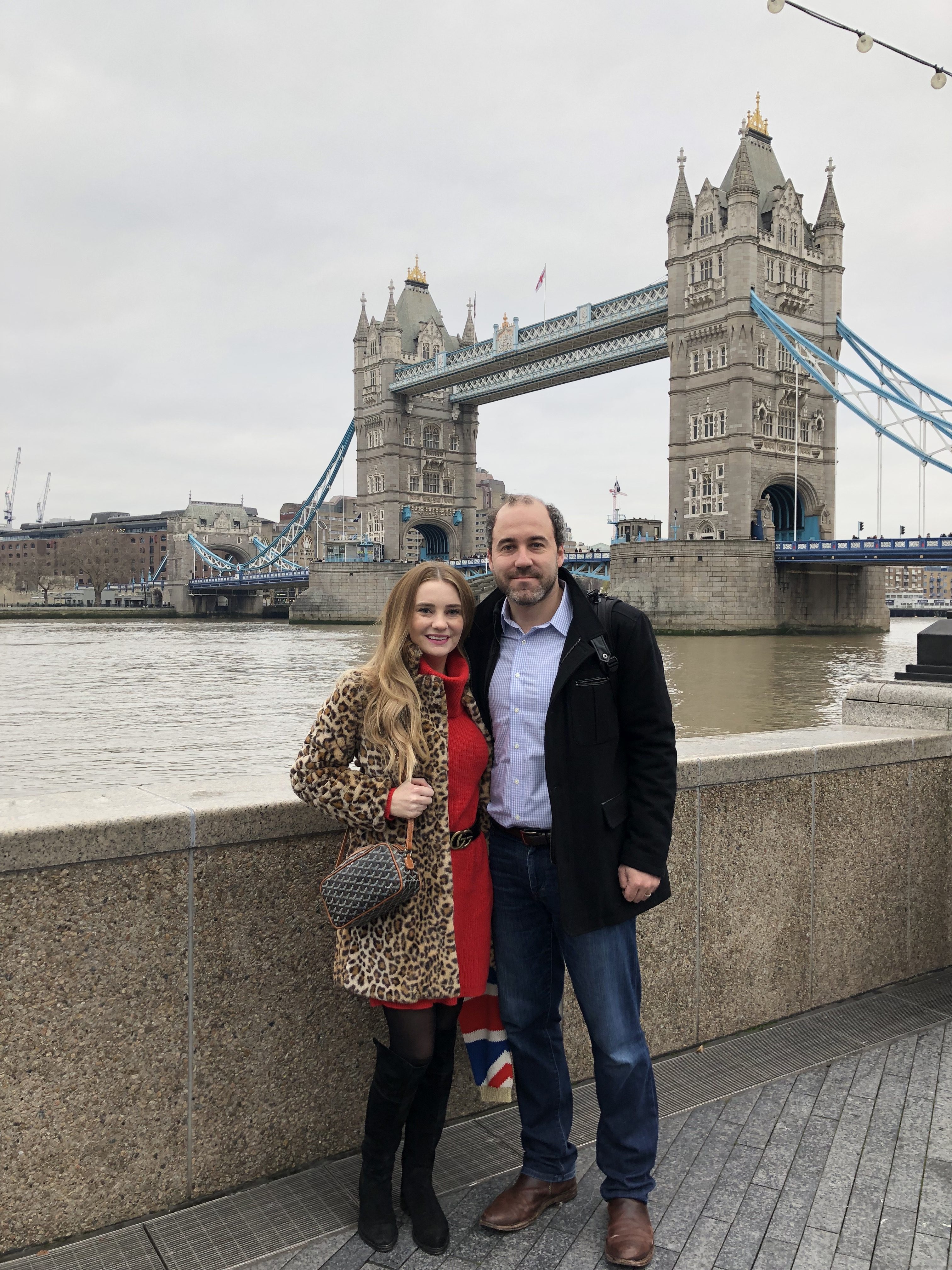 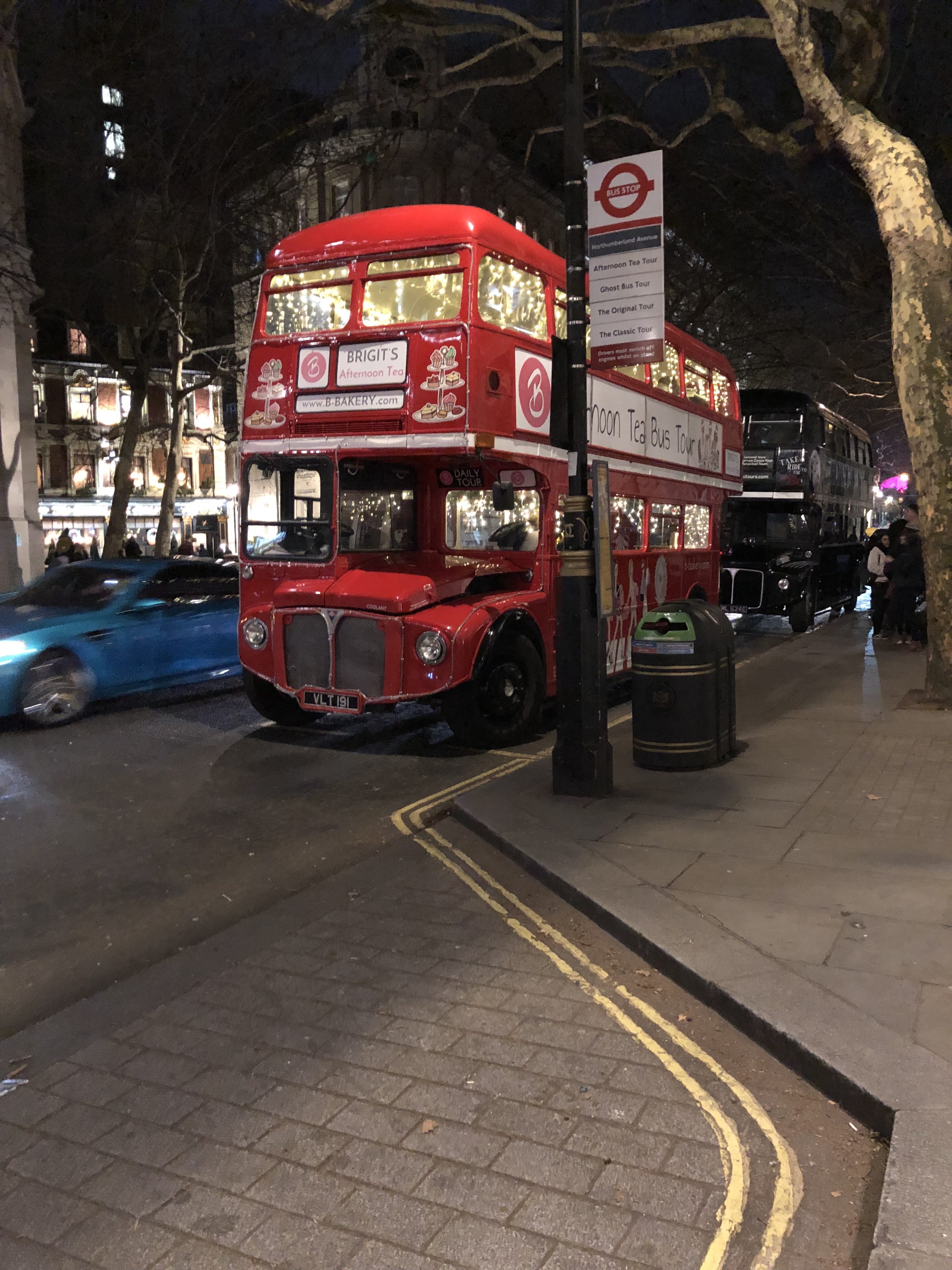 London – How we got there:

As I said in last week’s post, we used airline points to book our flights.  Rob and I were on separate flights to London and back.  We’ve gotten used to flying separately, and for me, it’s not much different than flying together since he mostly sleeps on any flight.  We both are big time Delta Airlines loyalists and that’s what airline we fly most of the time.  My flight over to London was from Detroit and Rob’s was from Minneapolis.  My total flight time going over was around 6 and a half hours, which honestly is not that bad.  I’ve done the east coast to west coast flights before and they are around 5 hours, so it’s very comparable to that.  I can’t really sleep on planes, so I mainly just watched movies and shows.  We left our respective destinations around 6pm CST and arrived in London at 6:30 am GMT (which is their time).  We arrived at our hotel around 8:30 am GMT after going through customs and getting an Uber.  I know everyone says to power through and stay up throughout the first day you get to Europe, but Rob and I are both big sleep people and we always have to take a nap when we first get in.  Luckily the hotel had our room available already so we both took a nap from about 9 am- 3pm (whoops).

London- Where we stayed:

I’m really big on researching hotels and will spend hours looking at sites like Booking.com and Trip Advisor and reading reviews.  I have been looking at hotels in London for, no lie, like 2 years, so I already had an idea of what part of town I wanted us to stay in.  I originally was looking in the Westminster area and Covent Garden, but we ultimately decided on the Trafalgar Square area because it’s super convenient to all of the touristy stuff, and since this was my first time there I wanted to be able to see ALL of the touristy things.  I think if we go back we could stay further out in areas of town like Kensington or Picadily and just take the subway. 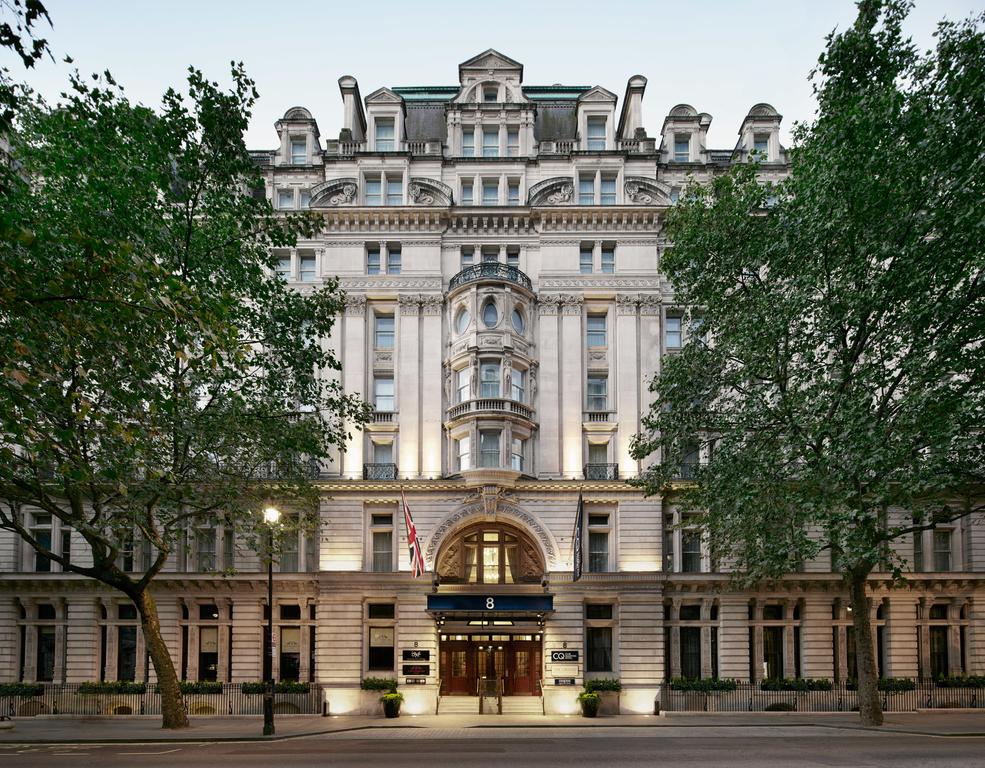 We love a good hotel but for cities like London where we knew we’d be sightseeing a ton, it didn’t really matter as much to have a fancy hotel.  We just needed somewhere that was convenient, affordable, clean, and safe.  Ultimately we decided on Club Quarters Trafalgar Square and I cannot say enough good things about this hotel.  I think we got it for a rate of $130 a night (or somewhere around that price) and it was everything we were looking for in a hotel.  It was literally steps away from the Trafalgar Square and in the other direction it was steps away from the subway station.  If you walked 3 minutes to the south you were at the little river bridge where you can see the London Eye perfectly. 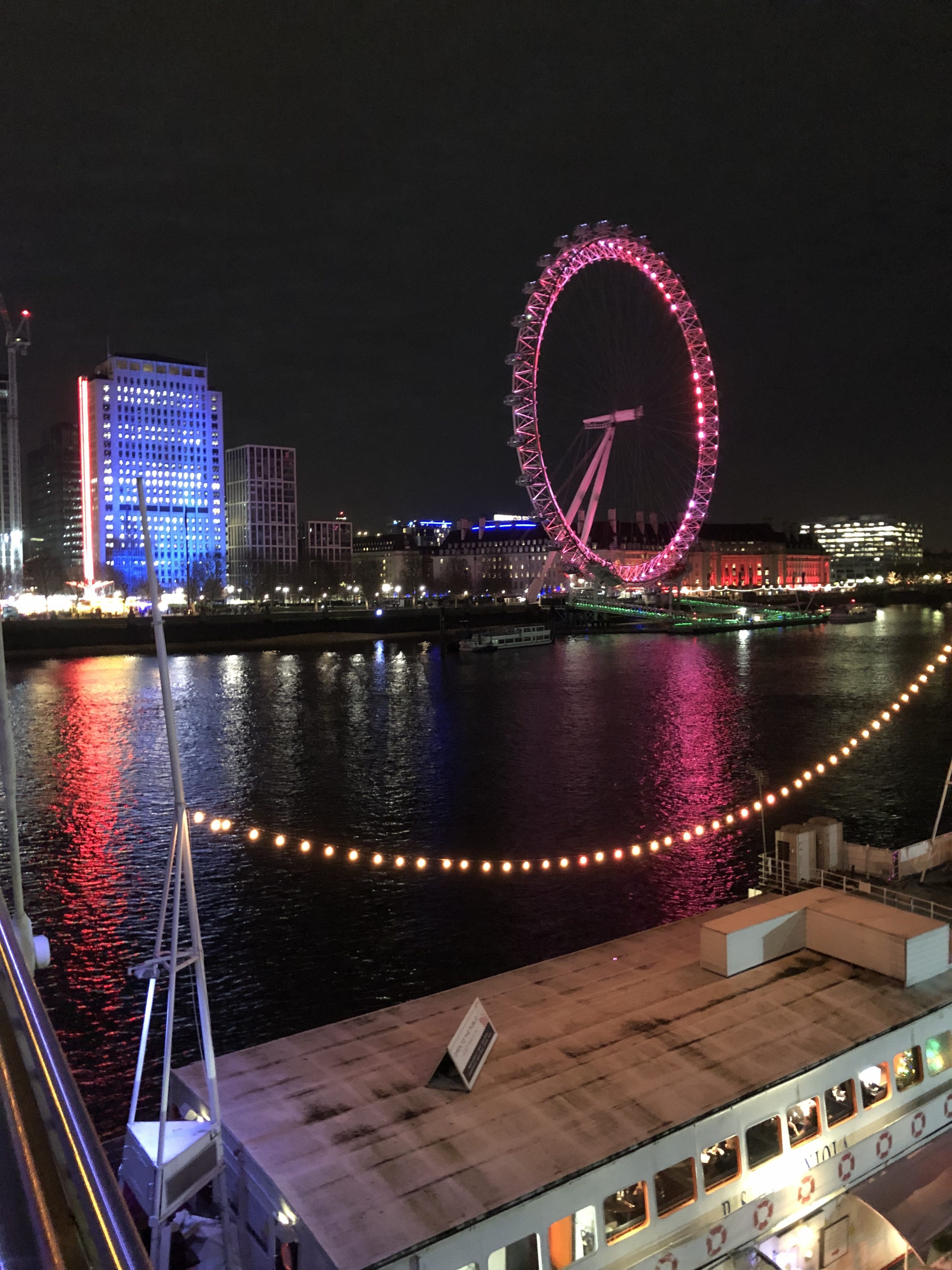 The rooms at Club Quarters were small but not super tiny like some we’ve been in during past EuroTrips.  We were actually in a really quiet part of the hotel where we literally heard no street noise, no outside noise, no other guest noise … it was amazing.  The bathrooms were a good size as well in European standards and had plenty of shower room.  Apparently the hotel had a free breakfast, but we never made it down there to try it 😛 The jetlag really hit us hard the first couple of days and we slept in well past the breakfast cut-off time.  Overall I was very pleased with the hotel and would definitely stay there again in the future. The hotel was very nice for the price and extremely convenient to all of the places we needed to go and walk to as well as places we ubered. 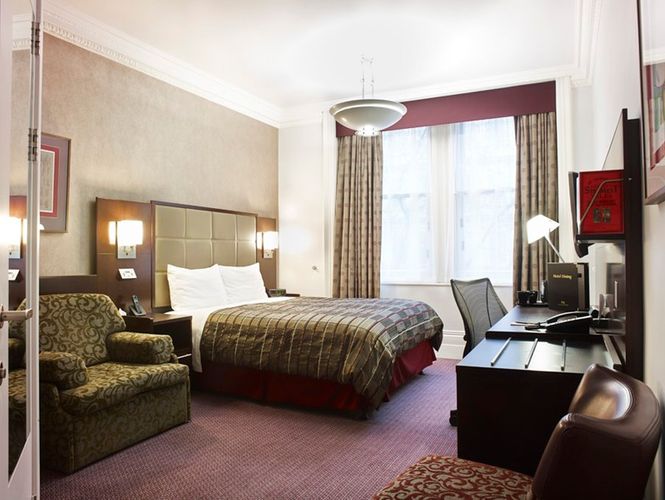 I’d also like to note that on our way back home we stayed the night at the Hilton at London Heathrow Airport and it was super nice and was a great place to stay if you have an early flight the next morning.  The big international airport in London (Heathrow) is pretty far out from the middle of the city, so definitely account for a good 45 minutes to get to and from there when and if you go.

London- What we did:

I wanted to do all of the touristy things since this was my first time visiting London.  However, we went the week of Christmas and a lot of museums and attractions had weird hours and some were even closed.  The one thing we did that I would highly recommend is the Fat Tire Bike Tour.  With the Fat Tire London bike tour we were able to see the Houses of Parliament, Buckingham Palace, Westminster Abbey, Big Ben, the Royal Parks, Kensington Palace and Trafalgar Square.  We try to do a bike tour in every city that we visit because you really get to cover a lot of ground and the tour guides are always a wealth of knowledge.  I actually did the very first Fat Tire Bike Tour location in Paris in 2005 and ever since then I’ve done 3 of their city tours in various European cities. 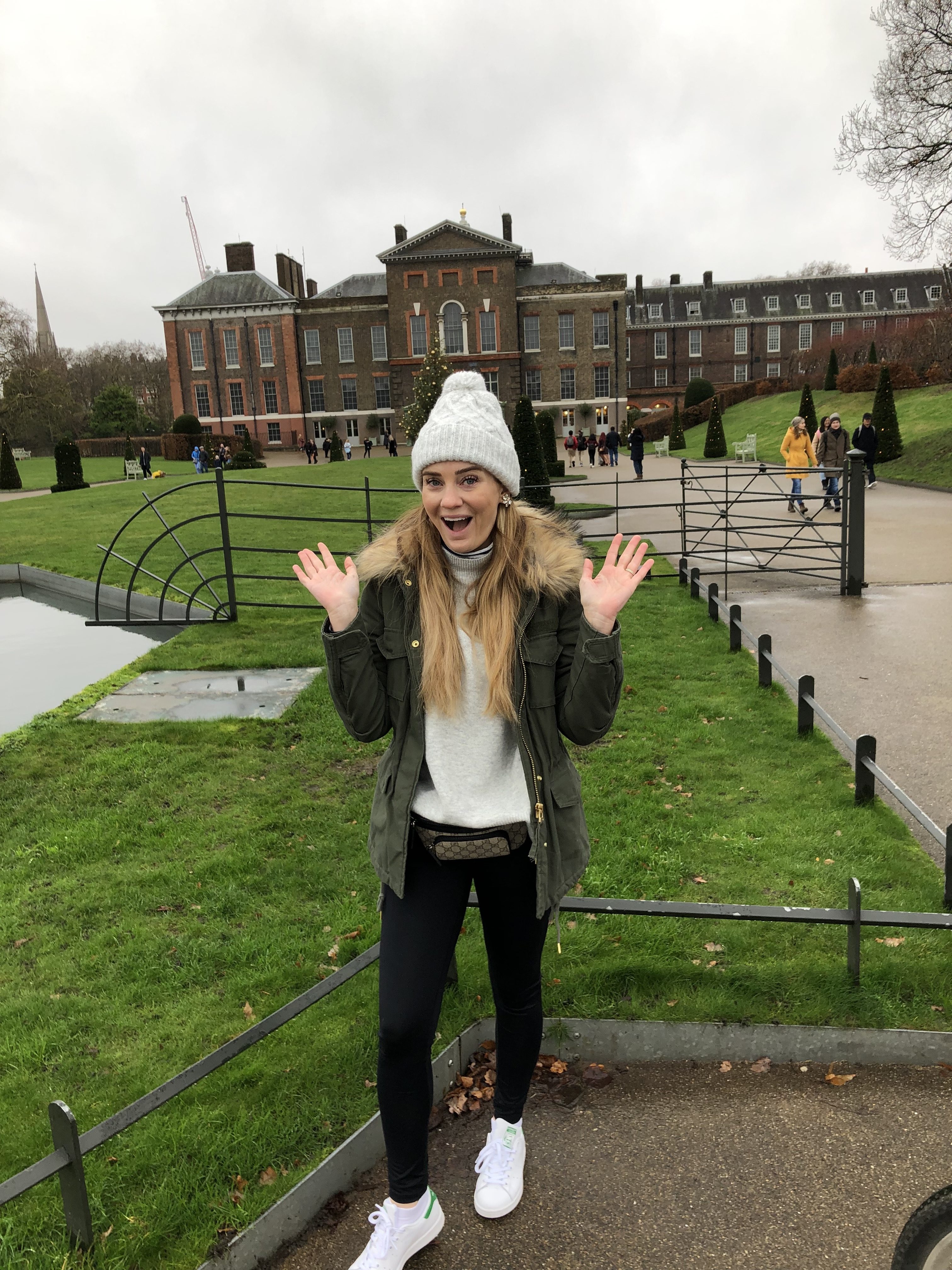 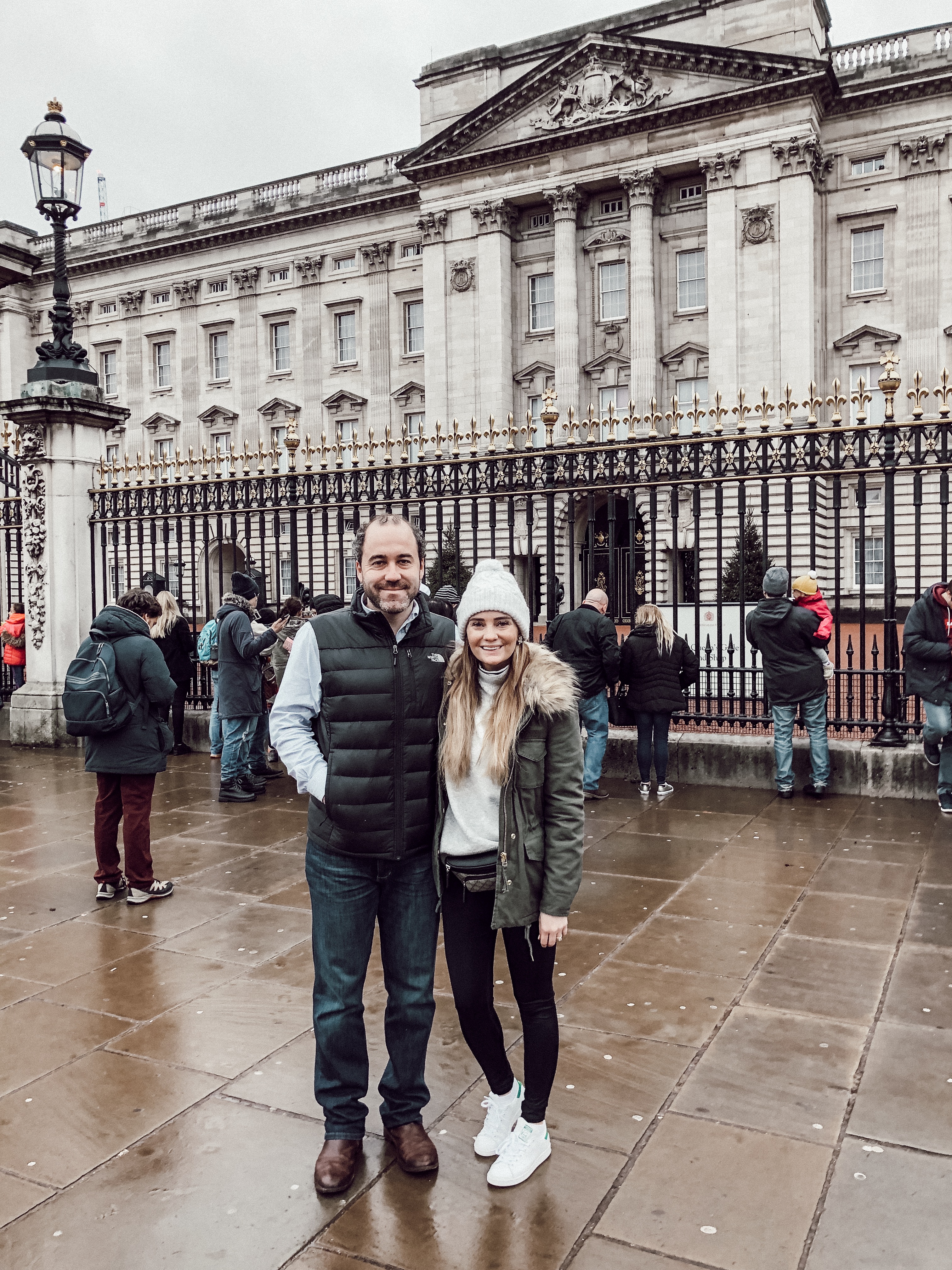 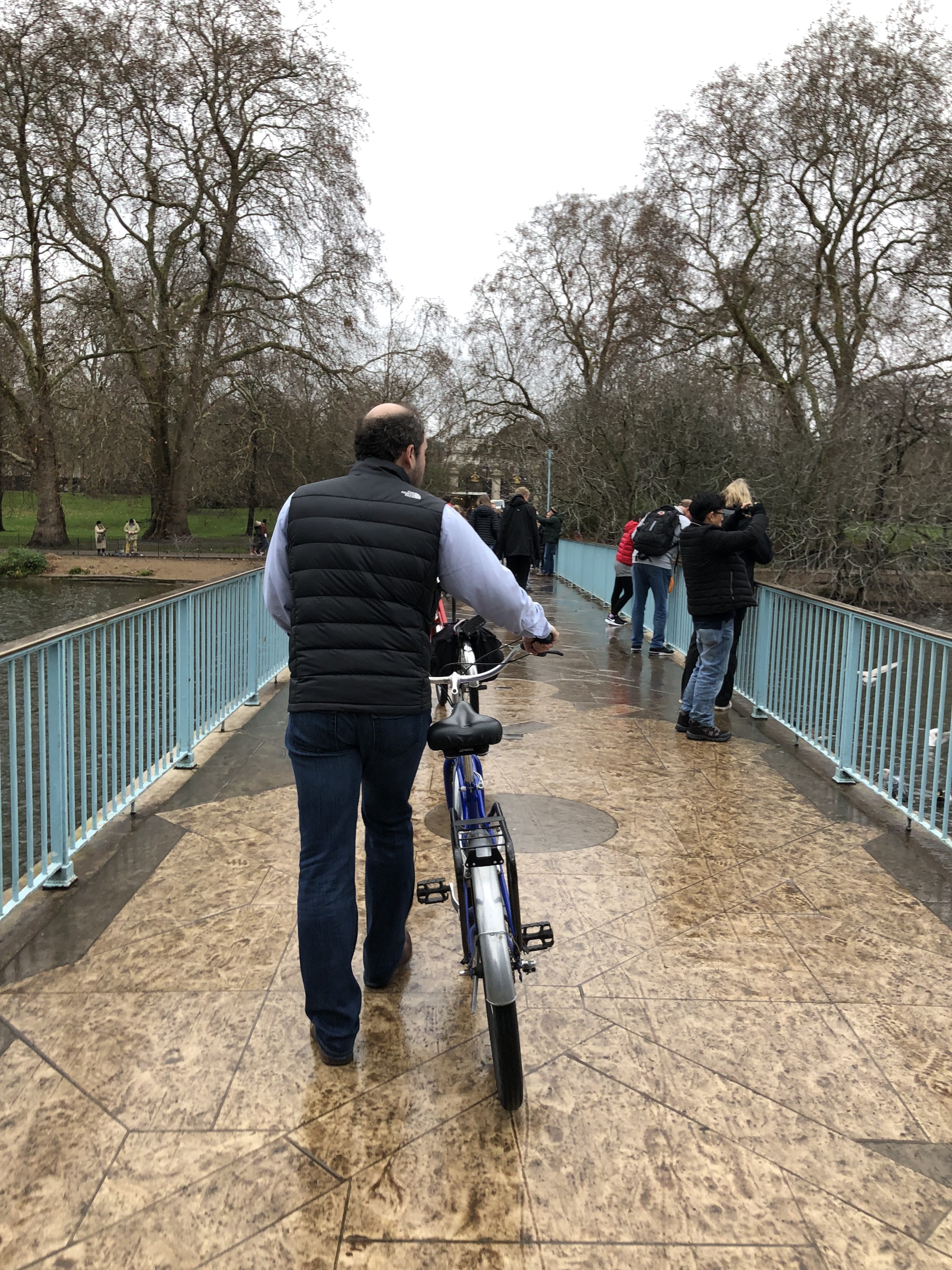 I really don’t love a rigid schedule when traveling, so one of our favorite things to do is to just walk around and take in all of the sights.  We will set out from the hotel with no real destination and just walk for miles.  Sometimes we find the most interesting and quaint little areas of a city by doing this and I love how it’s like a little adventure.  We did tons of walking on our London trip because as I said above, a lot of the museums and attractions were closed the day before Christmas and obviously on Christmas, so we had to think outside the box in terms of activities.  If I could do this trip over I would try to not go during Christmas but that’s just the way it worked out and I’m still glad we got to go even if a lot of things weren’t open. 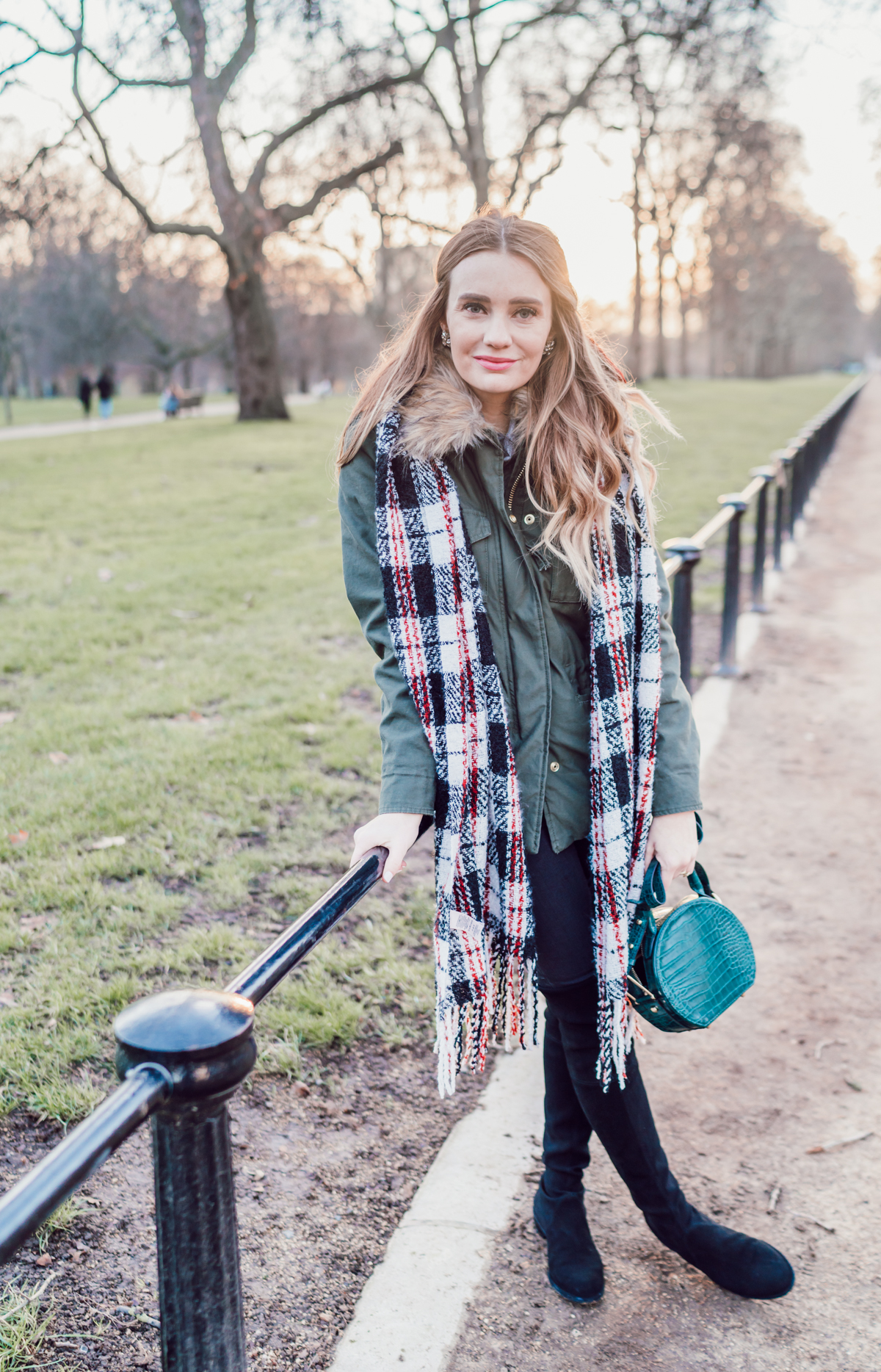 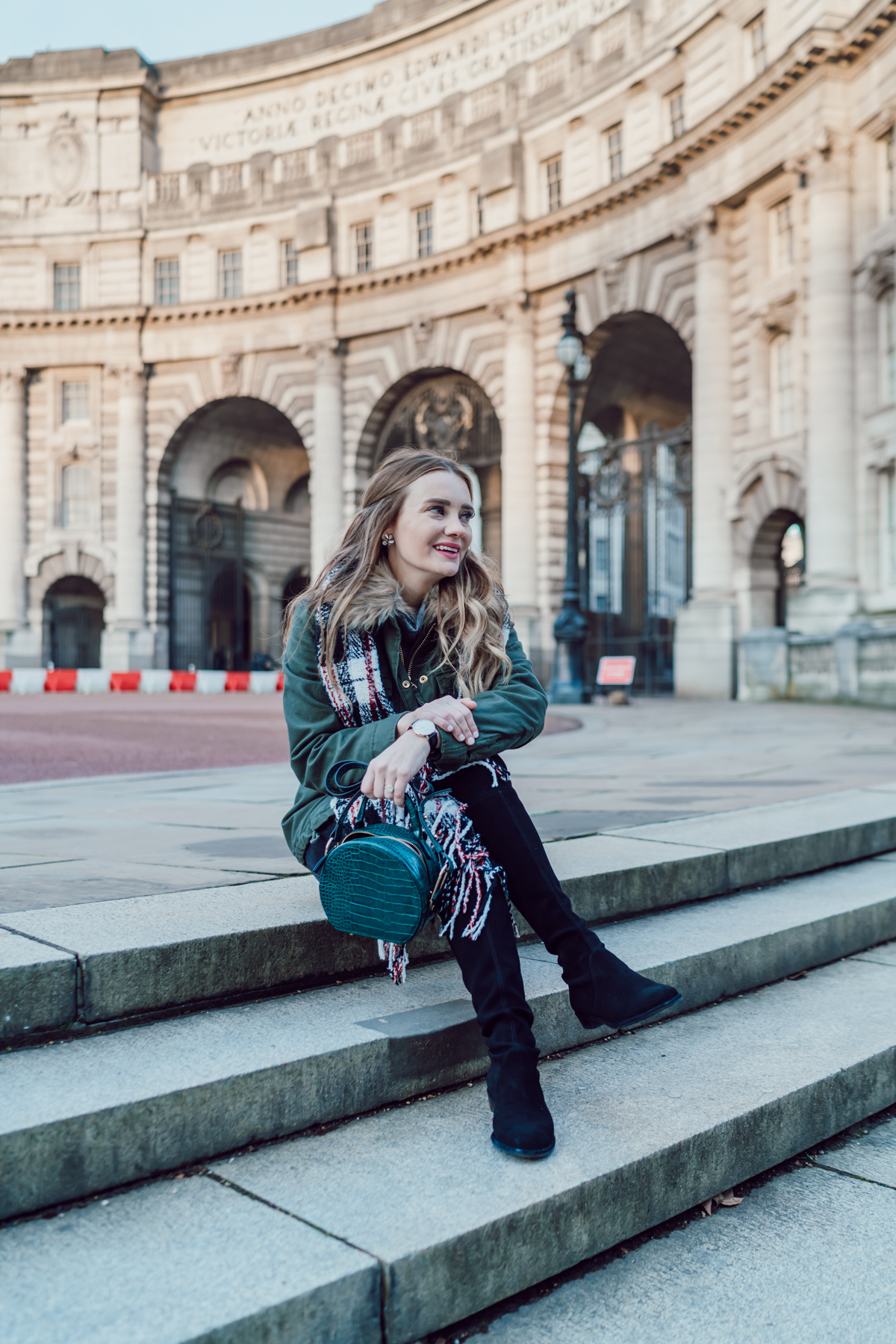 One of my favorite areas of town to walk around was the area near Buckingham Palace … I think it’s St. James park?  This location was pretty close to our hotel so if Rob was napping I would just grab my bag and go exploring around this park area.  I am a huge people watcher, so I had so much fun just grabbing a coffee and sitting on a park bench taking in all of the scenery and sights.  Also, keep in mind that depending on what part of town you’re staying in, London is a pretty spread out city.  So for instance, the Tower Bridge area was super far away from where we were staying and we had to get an Uber there.  I guess we could have walked but the weather wasn’t ideal for casually strolling multiple miles. 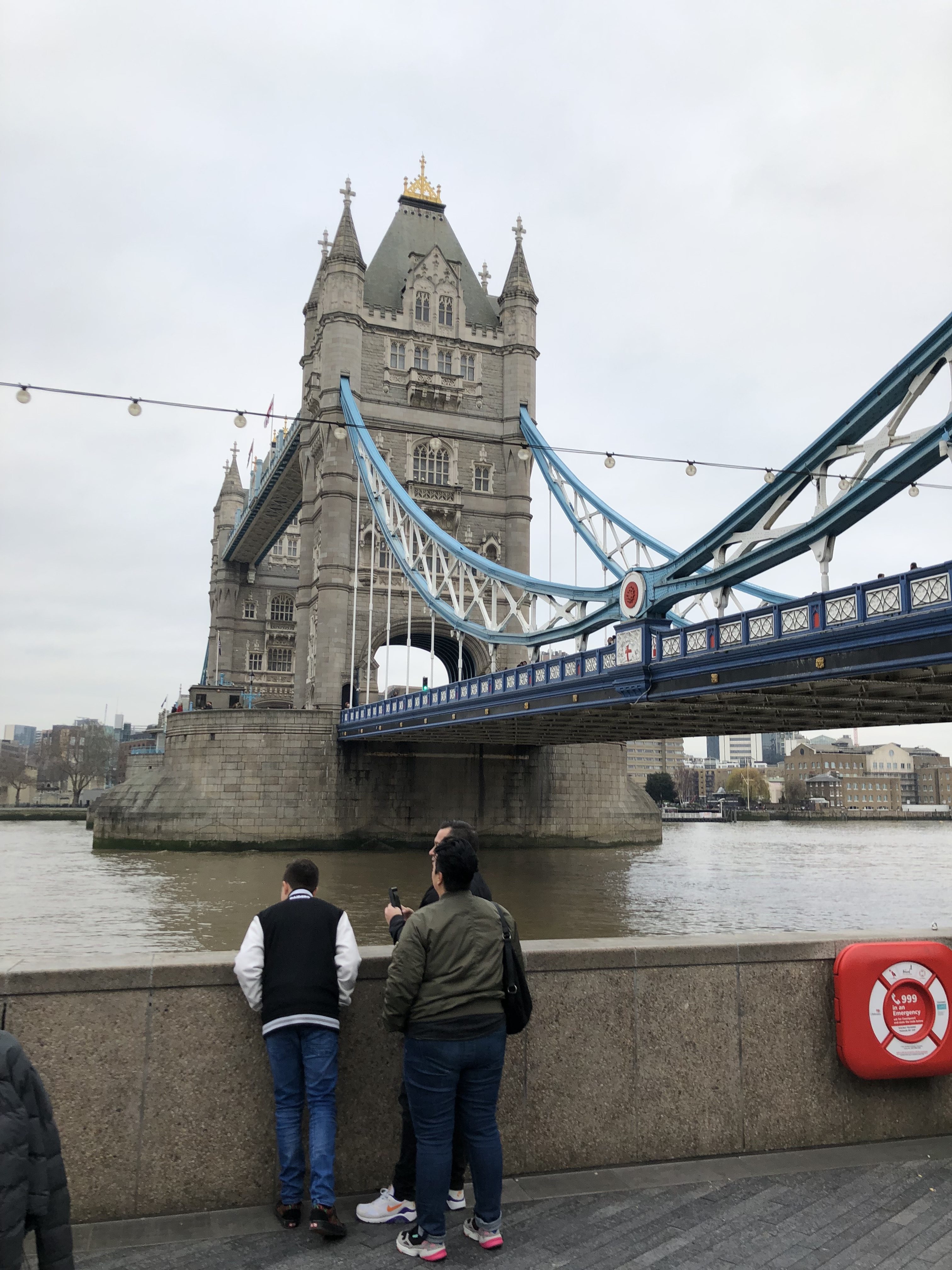 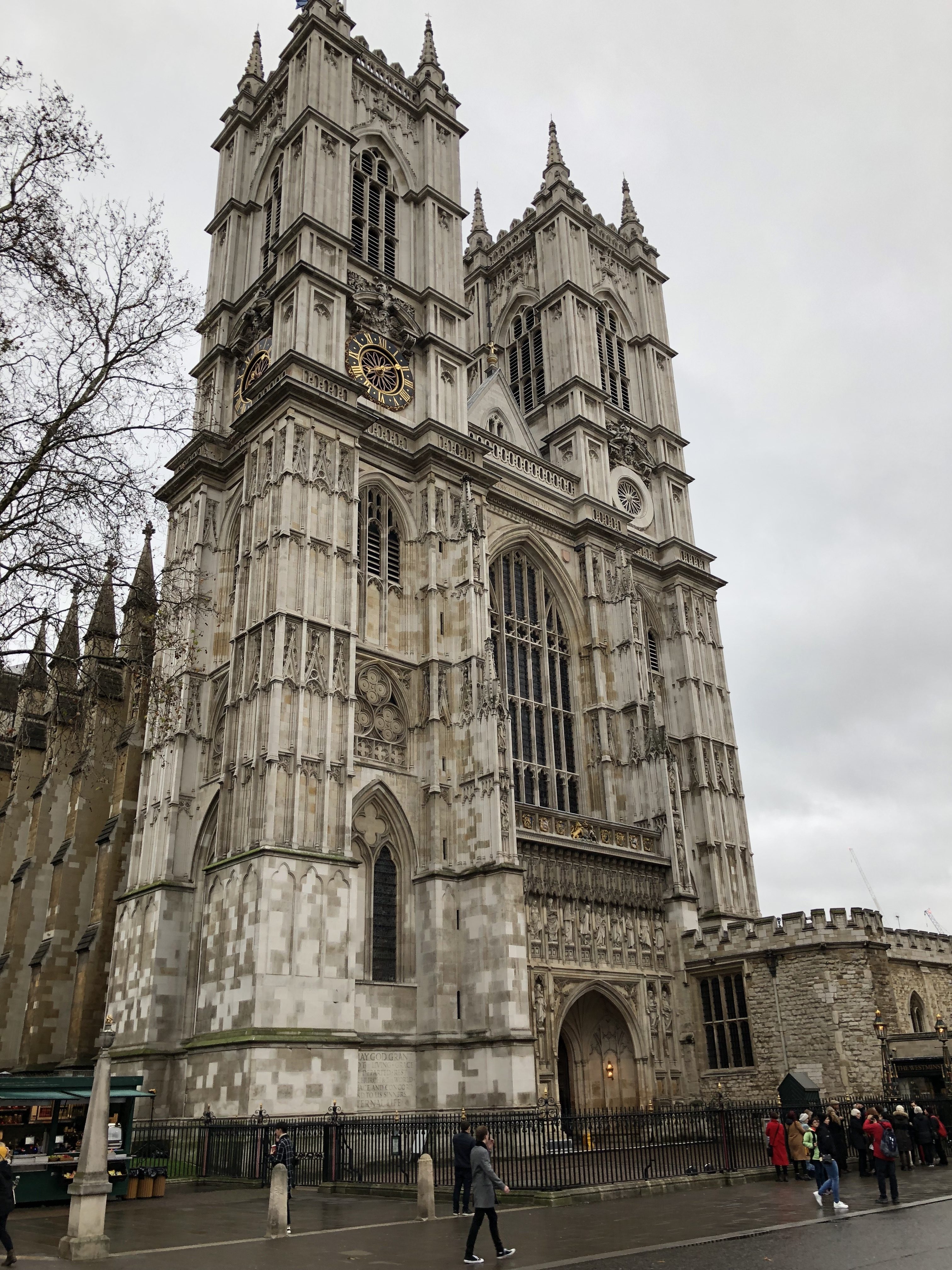 London- Where we ate:

Perhaps one of our favorite things about our London trip was the food.  We had some great food in London and I think a lot of that had to do with using Whitney to plan our itinerary because she knew exactly where the good food was.  Here is a brief rundown of where we ate and my thoughts: 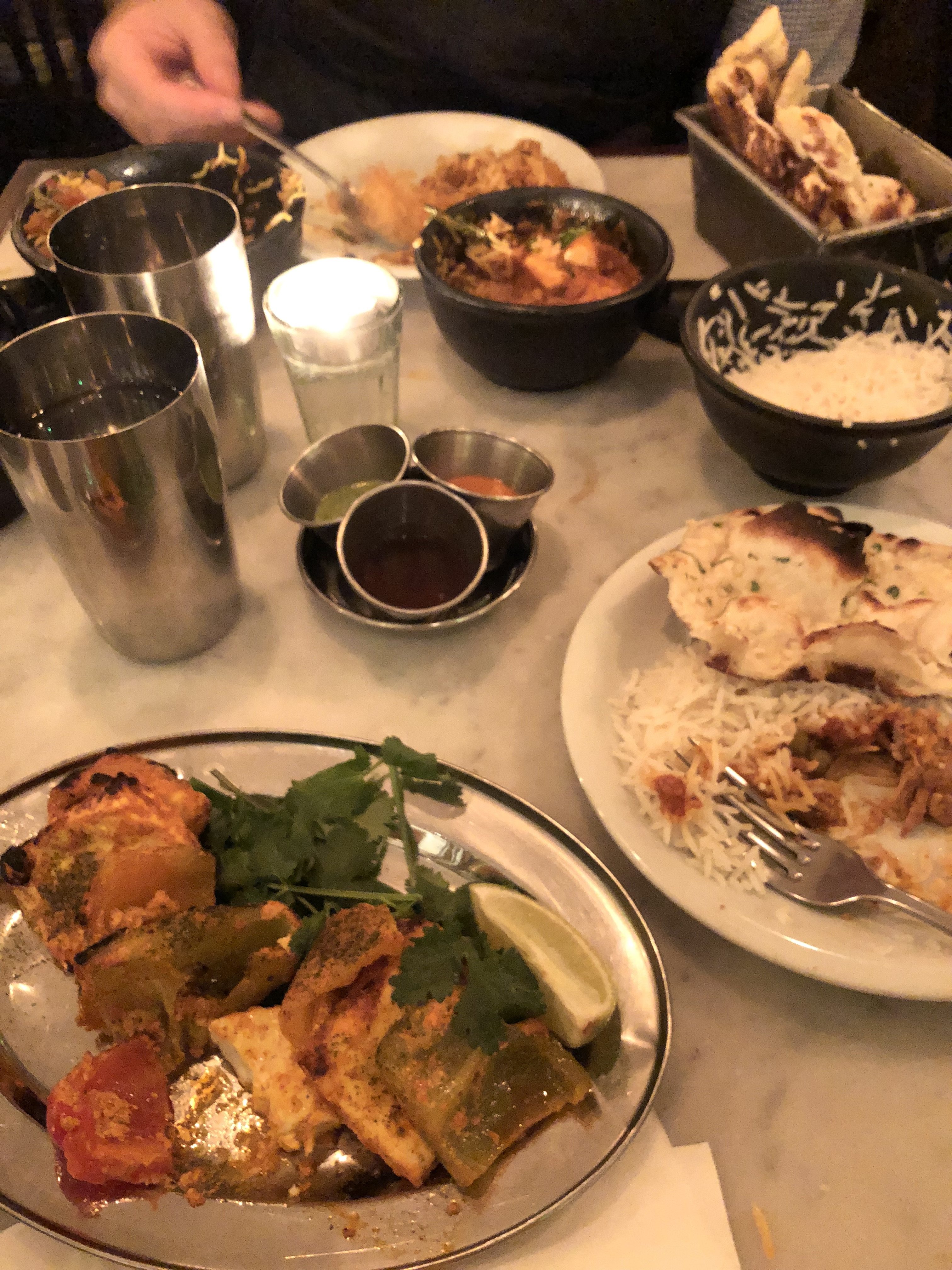 Dishoom– Dishoom is a very popular Indian restaurant and hands down was our favorite meal of the entire trip.  Everyone warned us about the line and they were 100% correct.  We went around 6:30pm on a Saturday night and I think we waited in line for an hour.  They have the line super organized so you can rest assured no one will cut you if you want to walk around for a bit while you are waiting.  They also handed out hot tea to people waiting in line so that was nice and kept us warm.  I don’t even remember what all we got to eat, but everything was delicious and I loved their chai tea. 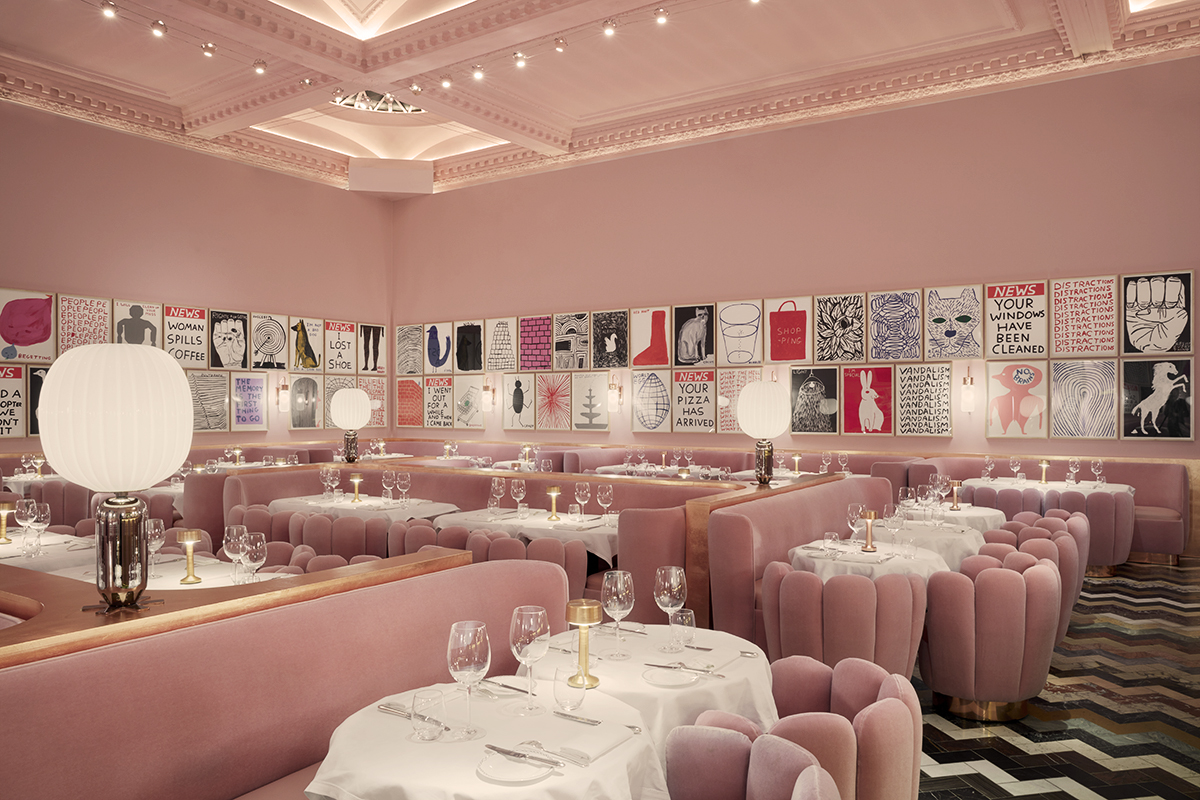 Sketch– did you even really go to London if you don’t eat at Sketch? Sketch is the very popular instagram hot spot where everything is pink velvet and they have the space egg bathroom.  I’ll be honest, it wasn’t my favorite in terms of food or portion size.  Was it an experience? Yes.  Would I go back? Probably not.  I’ve heard the tea experience is great there so maybe I’ll try that next time instead of dinner. 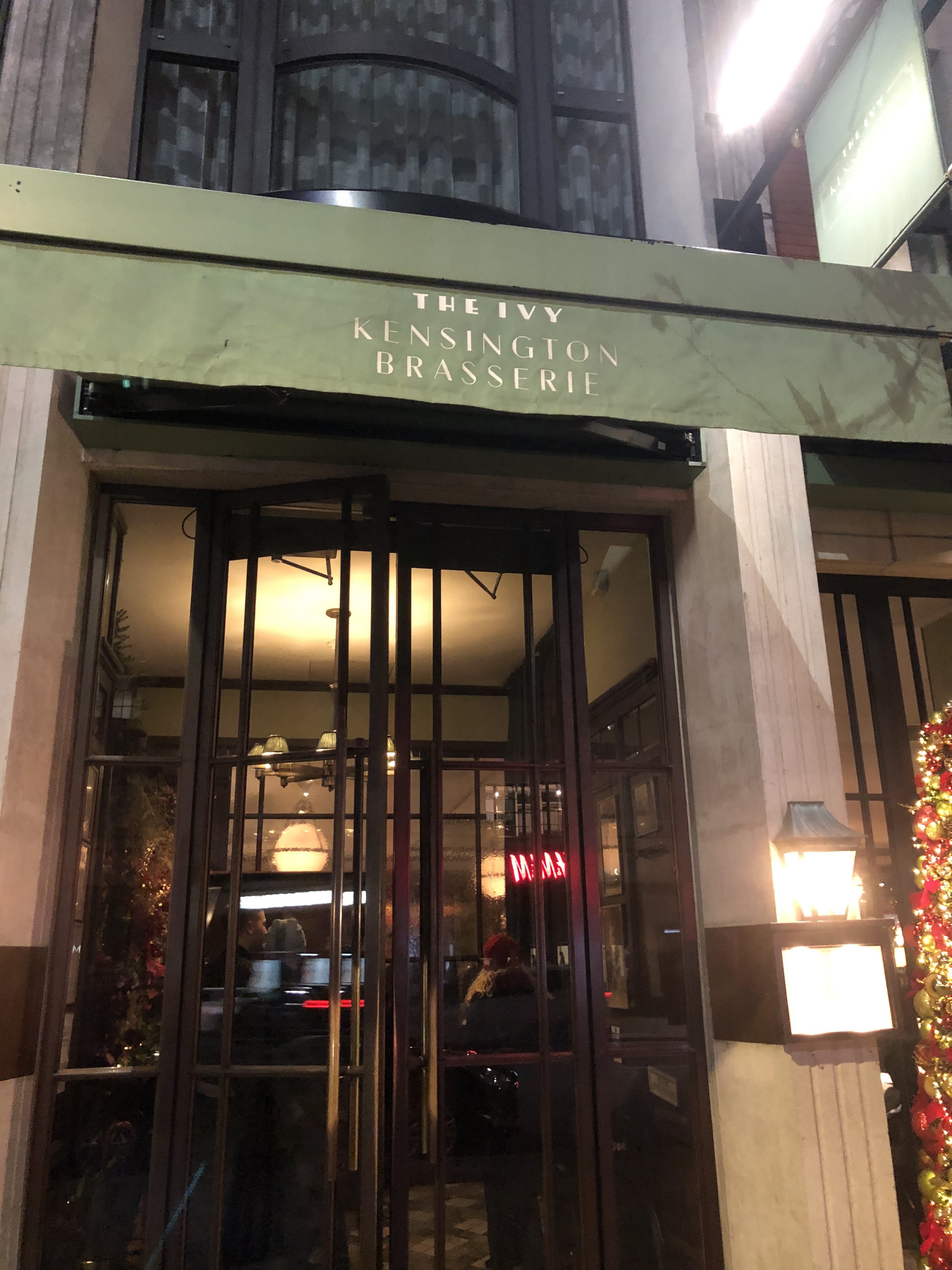 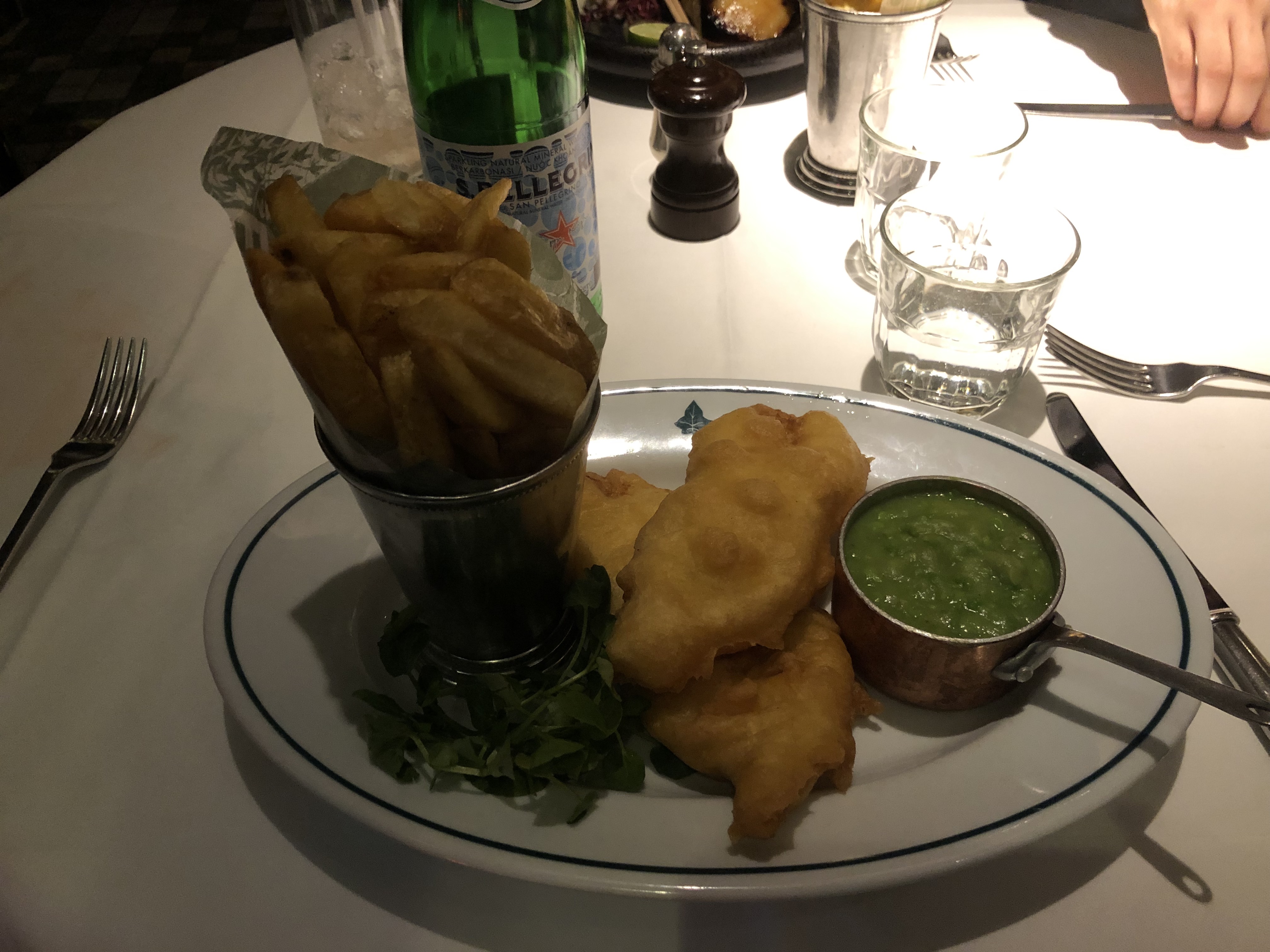 The Ivy Kensington– this was probably our second favorite meal in London and the atmosphere was top notch.  I think there are several different Ivy locations in London, but we chose to go to the one in Kensington.  We went around 8:30pm and it was super dark, so I kind of wish I could have gone back during the day to see what it looks like inside with some light.  I had the traditional British meal of Fish & Chips and it was delicious.  I also had the apple pie dessert that comes with a flaming liquor topping so that was really fun to watch.

Cafe in the Crypt– this was a cafeteria style food establishment near our hotel and we loved it because it is an underground 18th century crypt of St Martin-in-the-Fields, a popular London church.  There are tons of food options and you can go around and order from different stations before checking out at the end.  This would be a great place to grab a quick lunch if you’re out sightseeing and want some good food but don’t want to spend a lot of time at a sit-down restaurant.

Hotel Corninthia– this hotel was right down the street from us and they were one of the only places open for Christmas, so we decided to get the traditional British tea here on Christmas Day.  A range of specially commissioned, hand-painted bone china by Richard Brendon, arrives laden with finger sandwiches, scones and fine pastries and cakes, while an antique Champagne trolley is wheeled to each table to initiate the afternoon tea service.

I absolutely LOVED London and I am dying to go back and stay for longer during the warmer months.  We were only there for 4 days (and one of those we slept half the day), so I definitely feel like there is so much that we didn’t get to see.  There were so many museums that we didn’t get to tour and areas of town that we didn’t get to see.  I really loved the vibe of the city and everyone that we encountered was super friendly and helpful.  I also loved the shopping and if I would have been left alone for too long I think I could have gotten into some serious trouble.  I’ve always wanted to go to Ireland as well, so I think when I make that trip happen I will just tack on London and go again since they are so close.