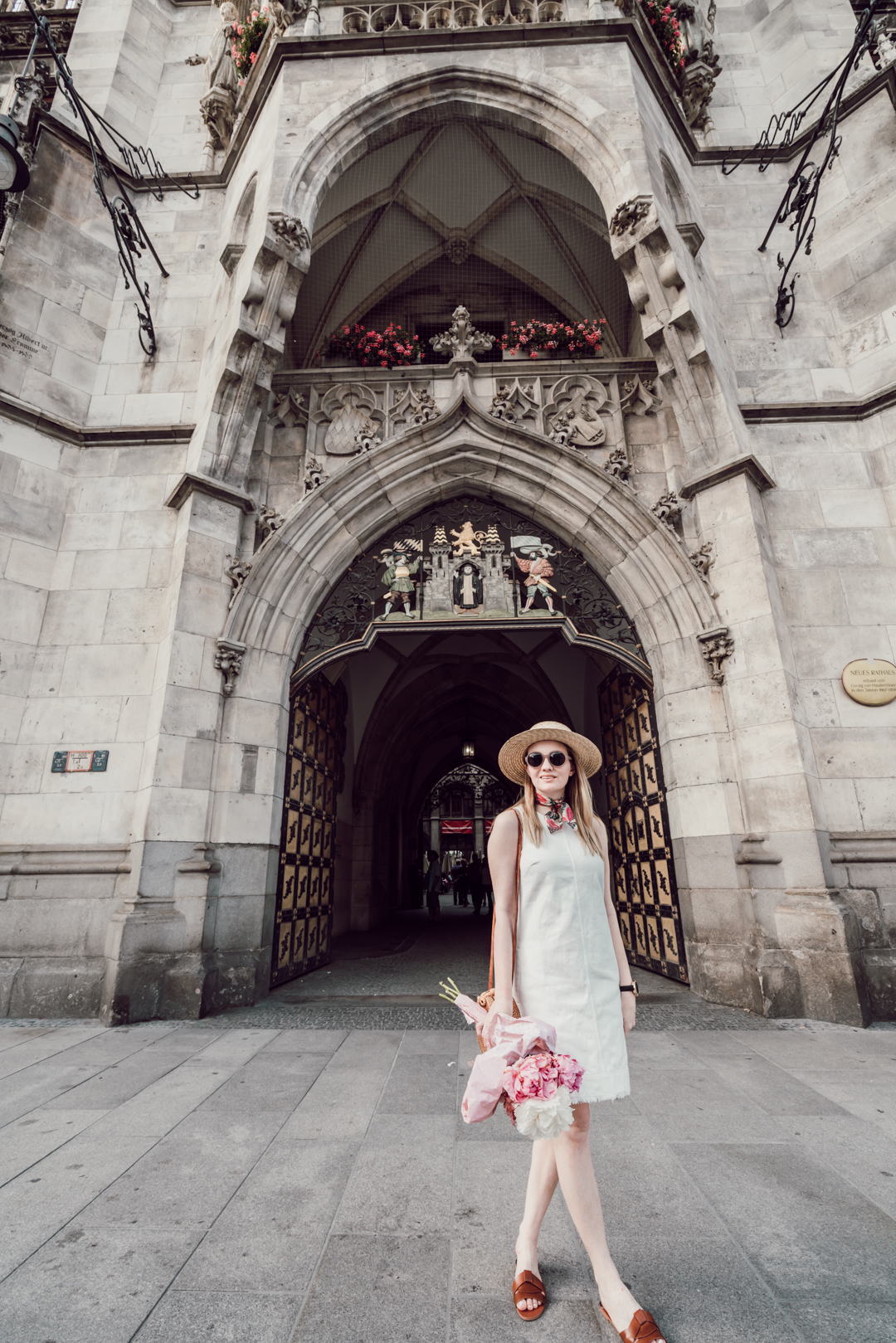 Oh Germany!  How I loved you so … seriously, I would pack up my bags and move to Germany in a heartbeat.  I actually find myself googling “how to live in Europe as an American” at least once a week and surprisingly, Germany always pops up as one of the best places for Americans to live in Europe.  When I was planning this trip, I knew that Germany had to be on the list.  Funny enough, it almost didn’t happen because I thought I had a hotel deal in Vienna, Austria, but it ended up falling through and I was happy to have Munich as a back-up plan.  It’s hard to put into words why I liked Munich so much, but it had a lot to do with the spirit of the people there.  Everyone was so jolly and friendly and they love to eat! I was kind of intimidated by the language barrier at first, but I was pleasantly surprised that nearly everyone we encountered spoke perfect English.  Here are some things you need to check out if you ever find yourself in Munich, Germany: 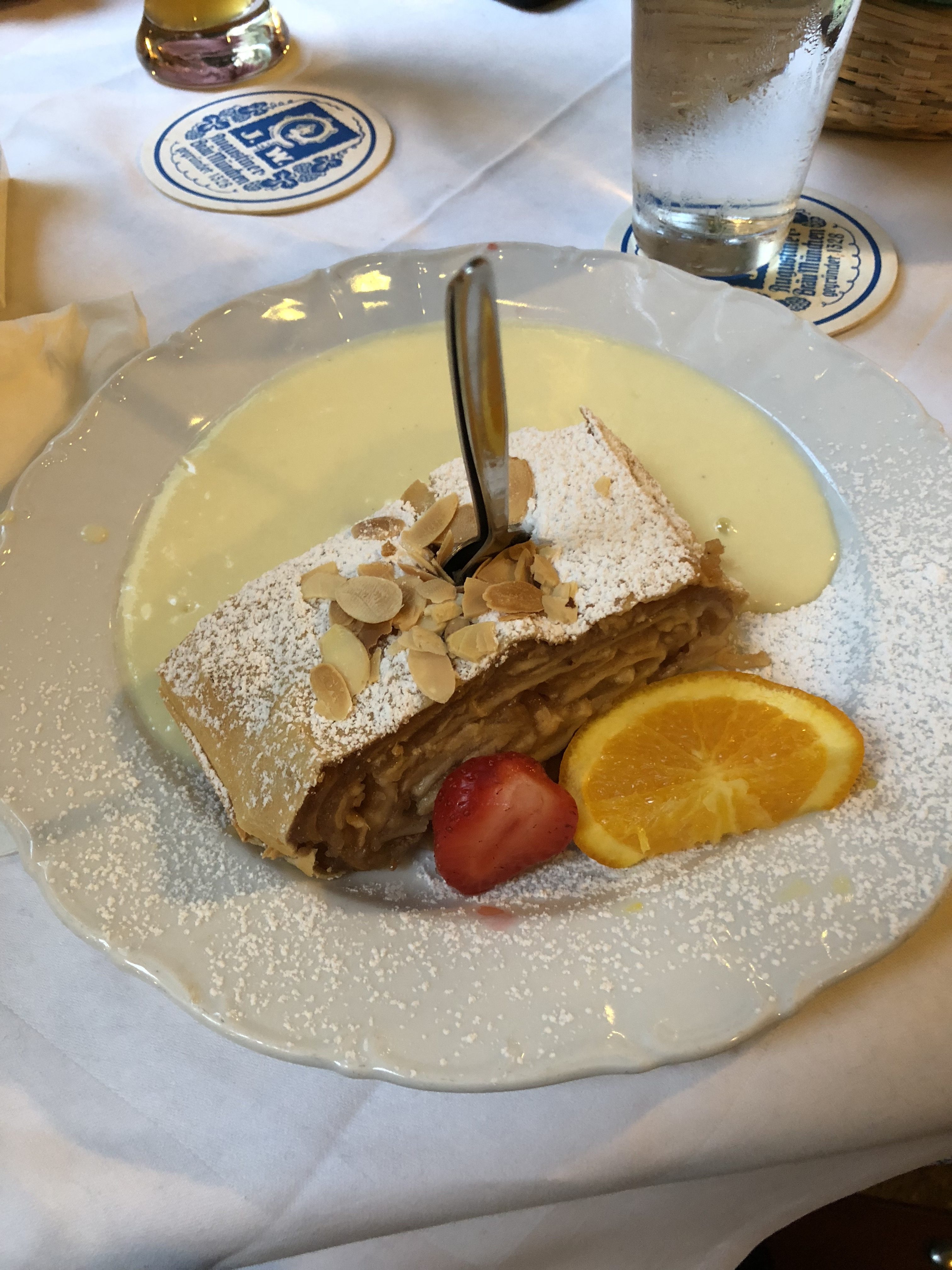 Eat & Drink at an Authentic Hofbräuhaus – we got really lucky that our hotel was right down the street from one of the best beer gardens in the city called Zum Augustiner and let me tell you, the food was AMAZING.   Rob and I are vegetarians and were kind of nervous about partaking in German cuisine, but this place had a special vegetarian menu and we chowed down on some pretzels, vegetarian creations, and lots of potatoes.  The service was so speedy and my Apple Streusel dessert was to-die-for.  If this one isn’t in your area, there are plenty more authentic beer gardens around the city. 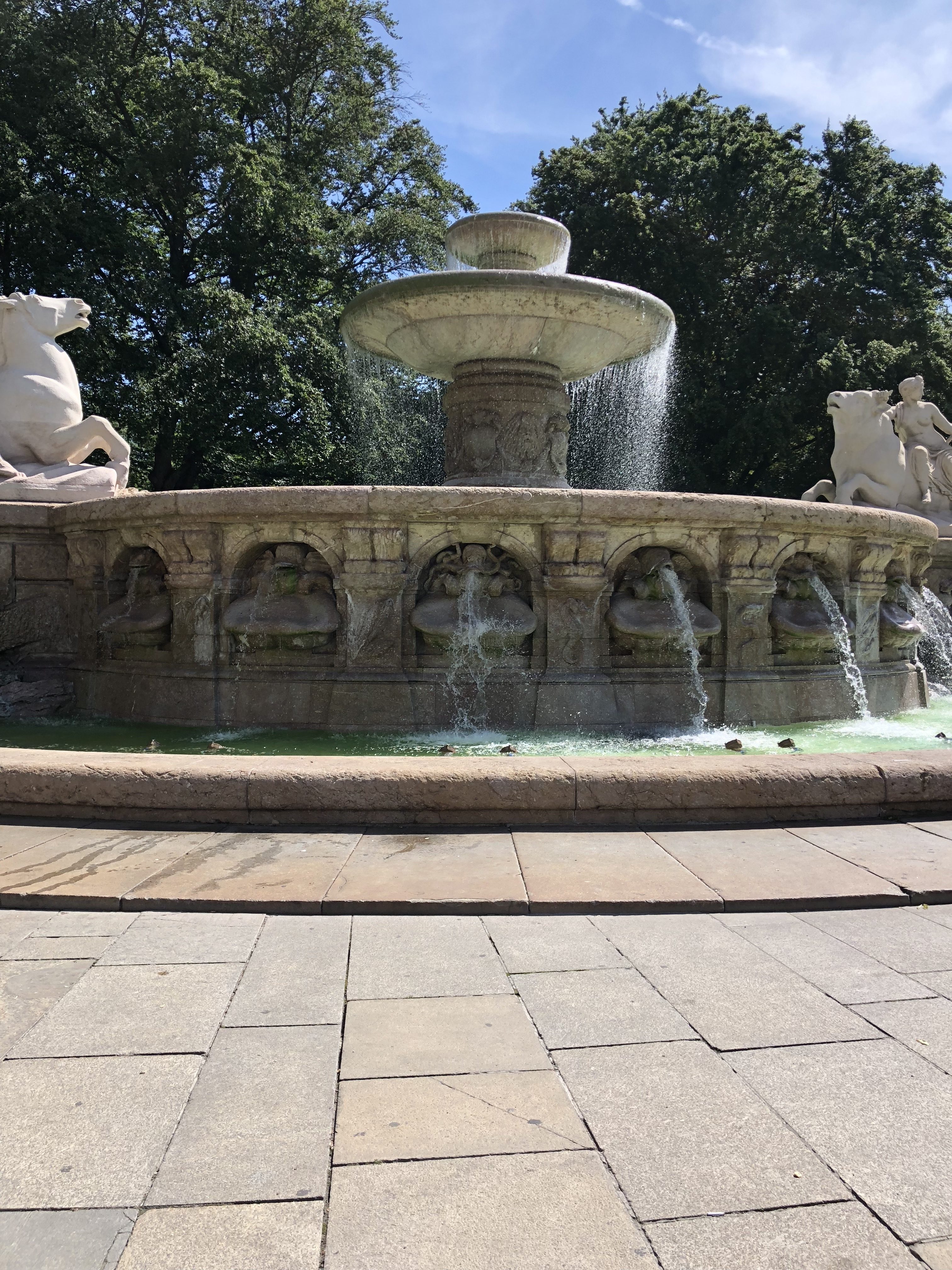 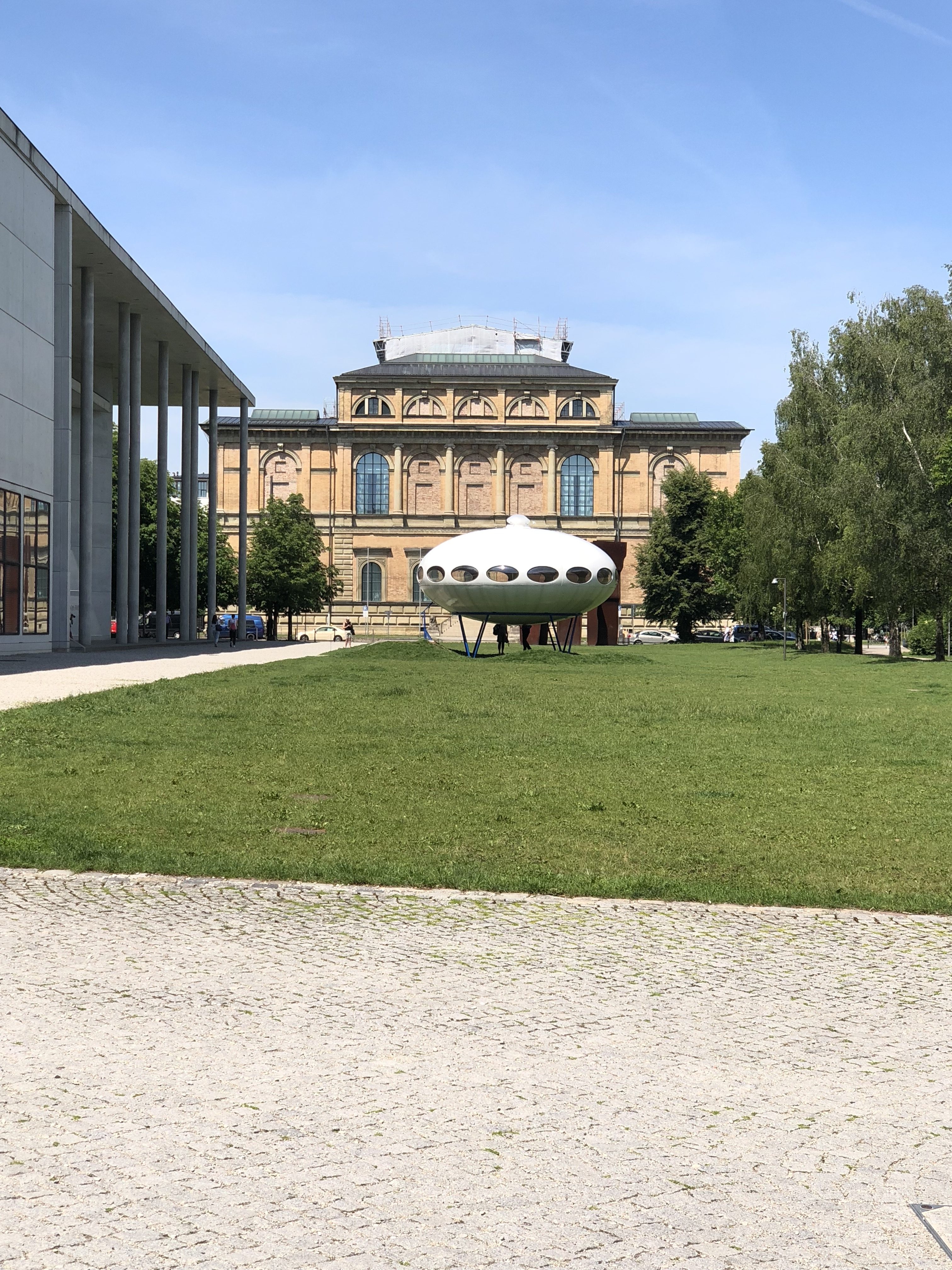 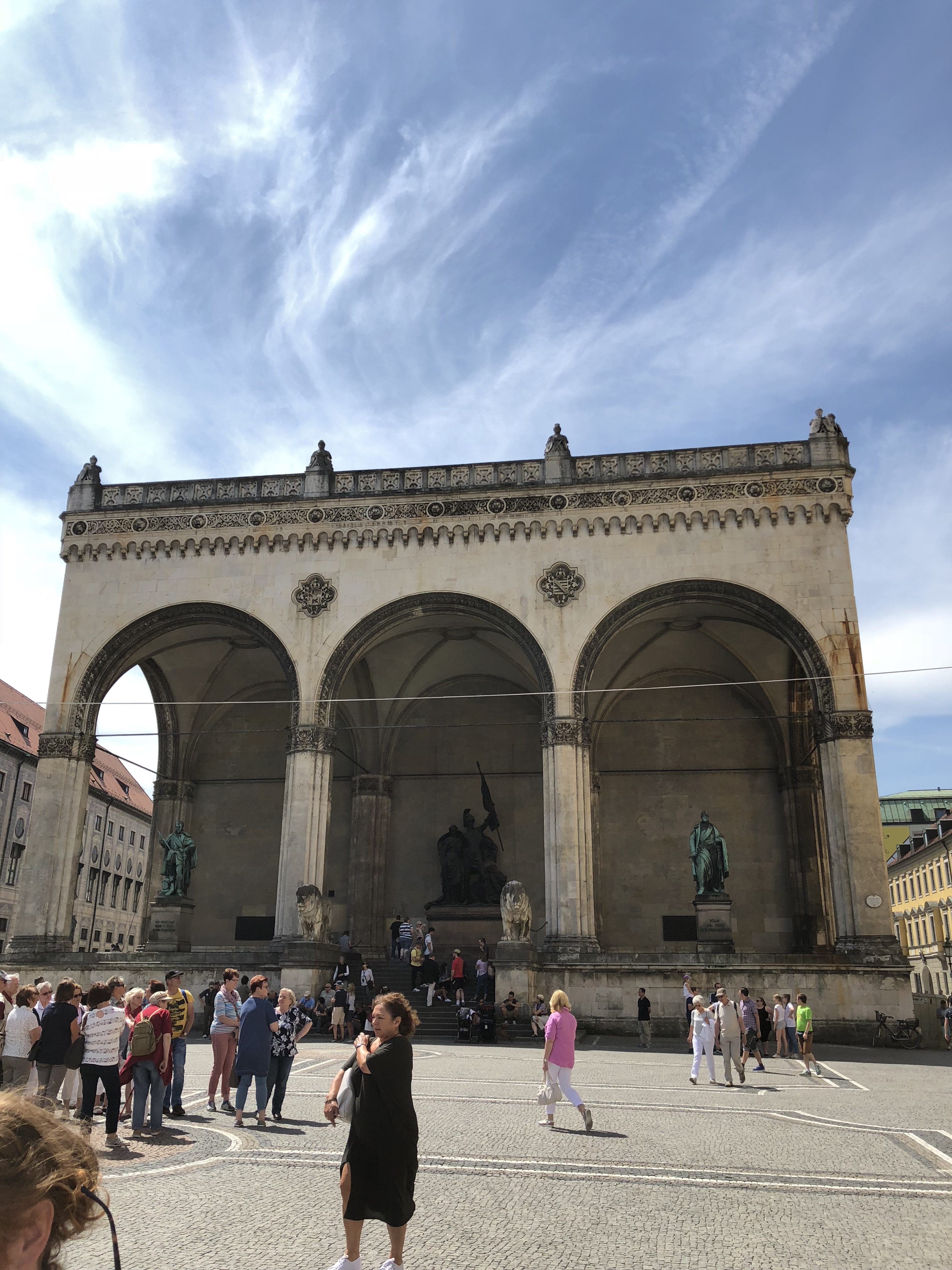 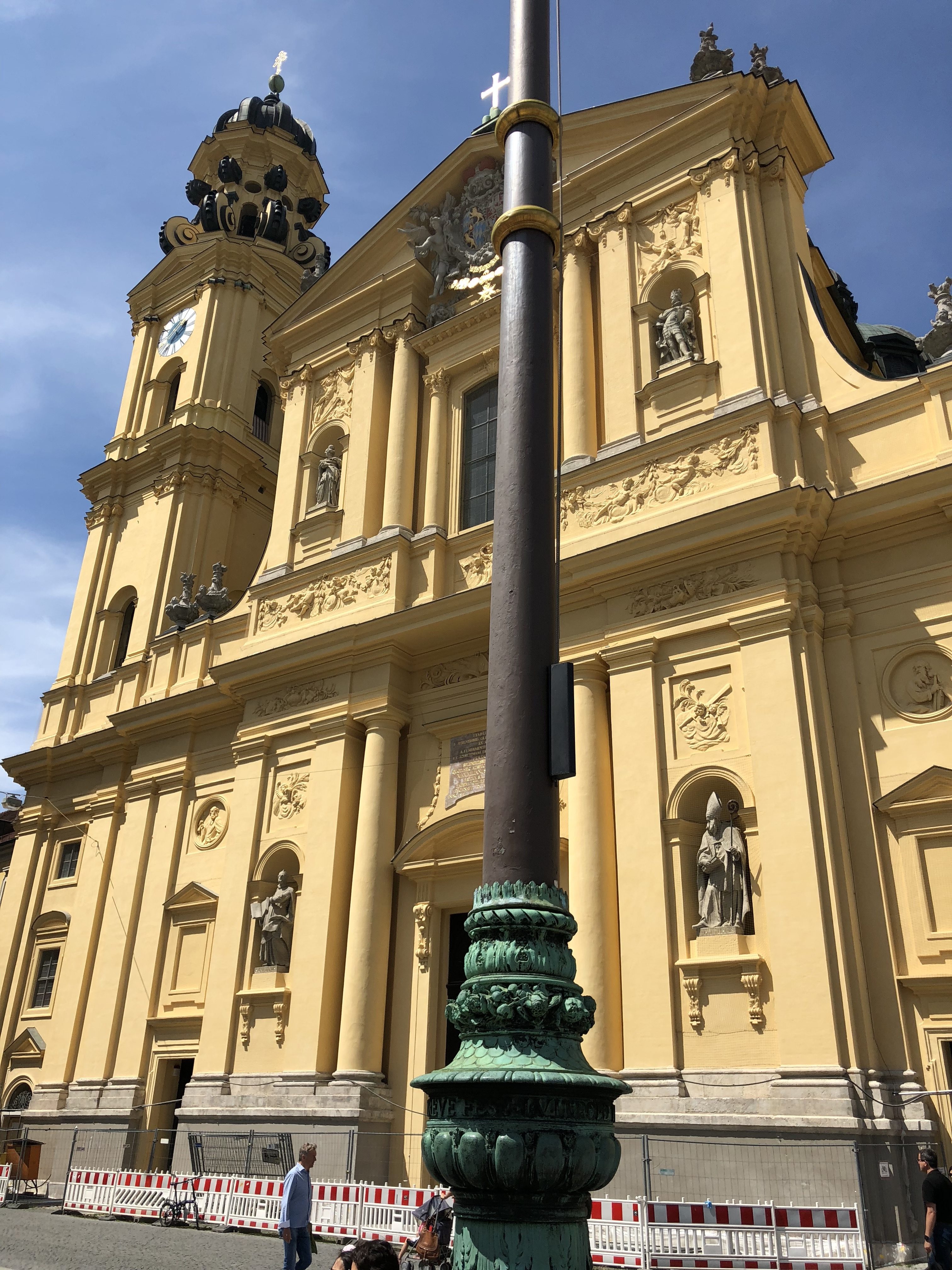 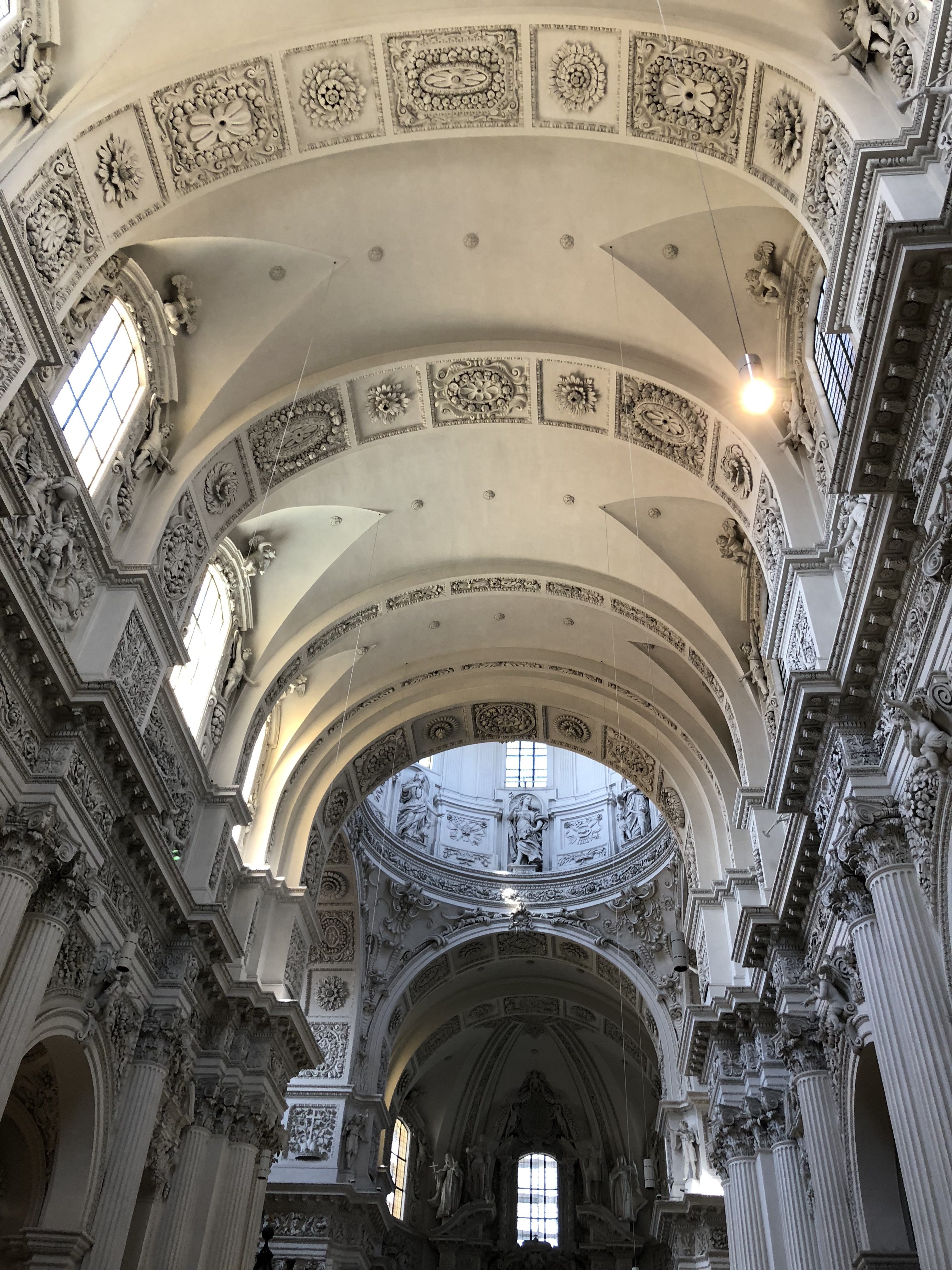 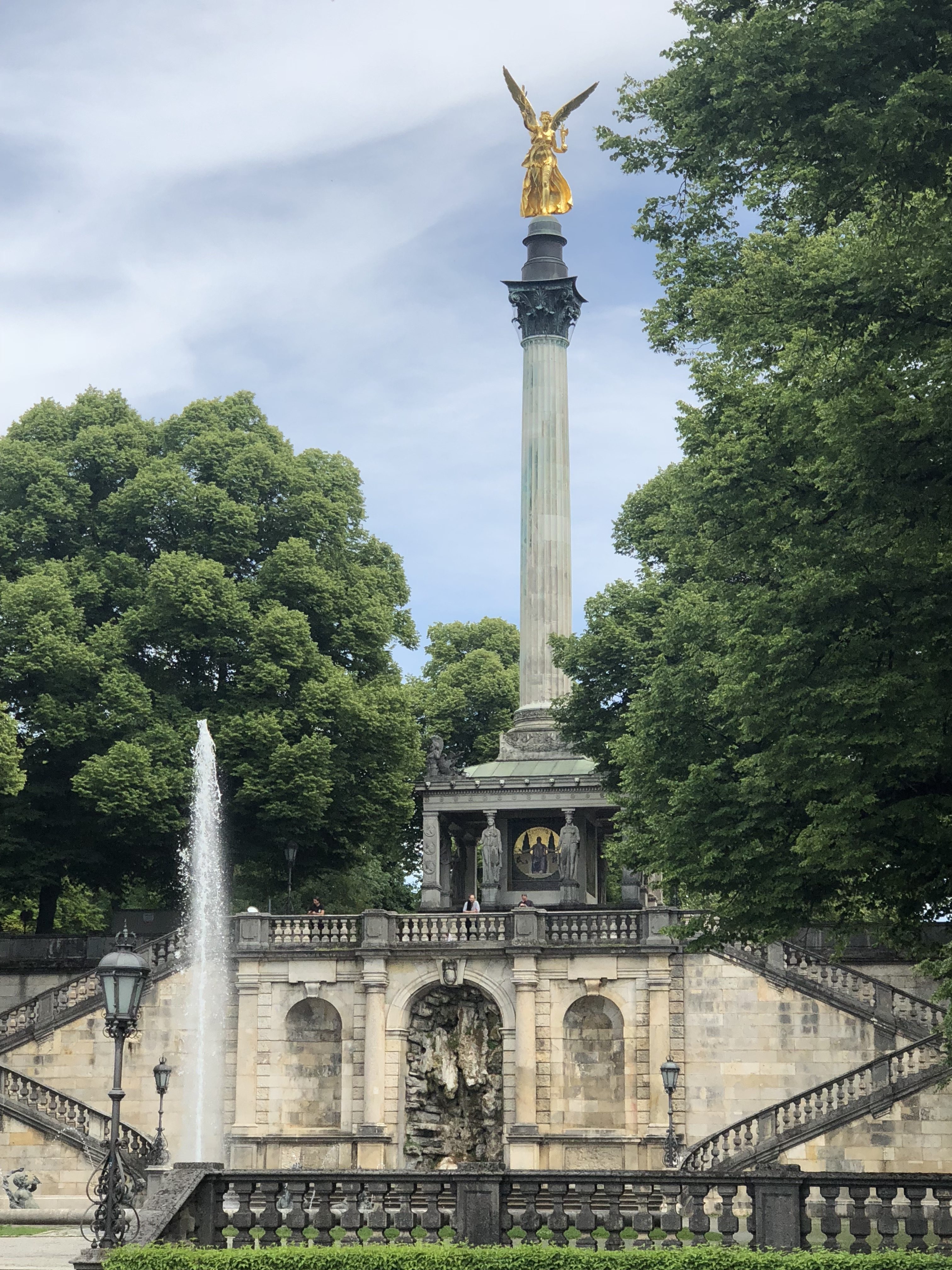 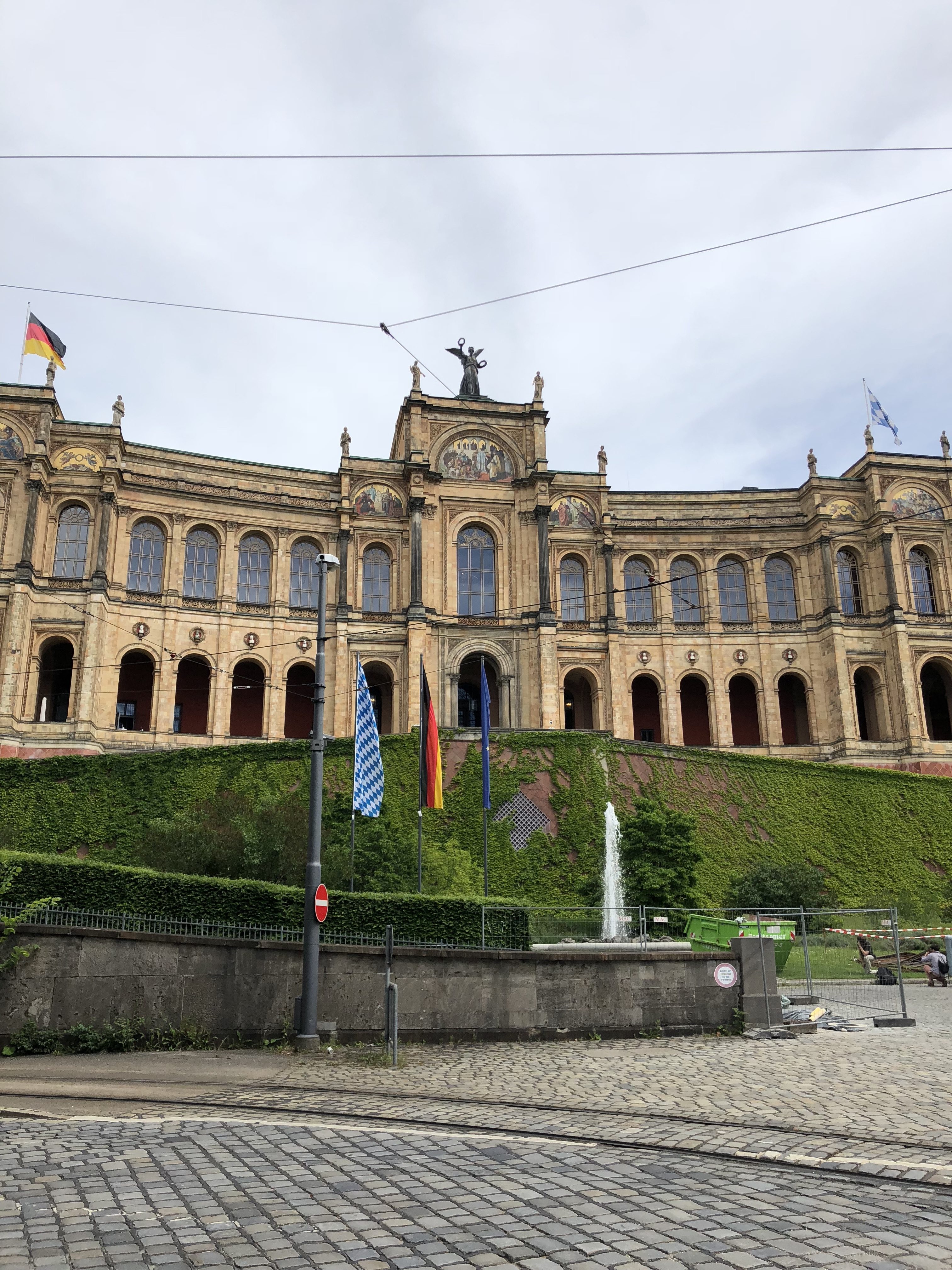 Take a Bike Tour– this is hands down always my recommendation for any foreign city and something that Rob and I do every time we travel.  Bike tours are such a neat way to see a city and you really get to cover a lot of ground and see a lot of sights in a short amount of time, all the while getting a little exercise! We are kind of partial to Fat Tire Bike Tours (long story, but I took my first tour with them in Paris in 2005), and we now have their punch card with all of their city tours for several cities in Europe (we’re up to 3 punches so far).  We had the absolute best tour guide, Steve-O, who was an irishman living in Munich and he was full of information, education, and tidbits and kept us laughing the entire tour.  This bike tour was truly the highlight of our trip to Munich. 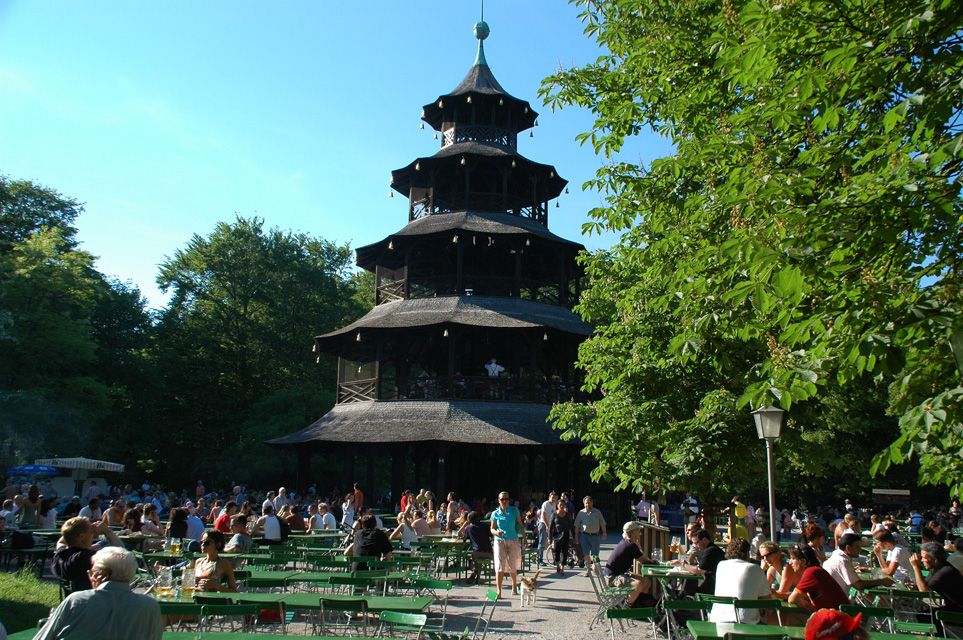 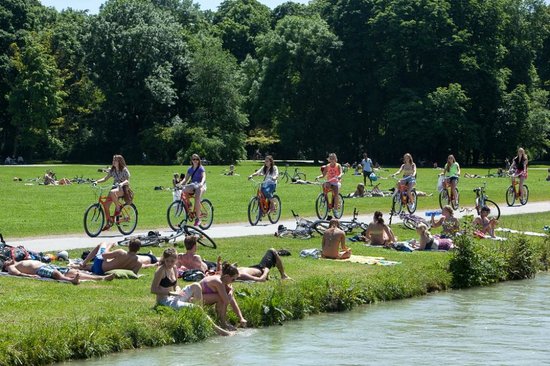 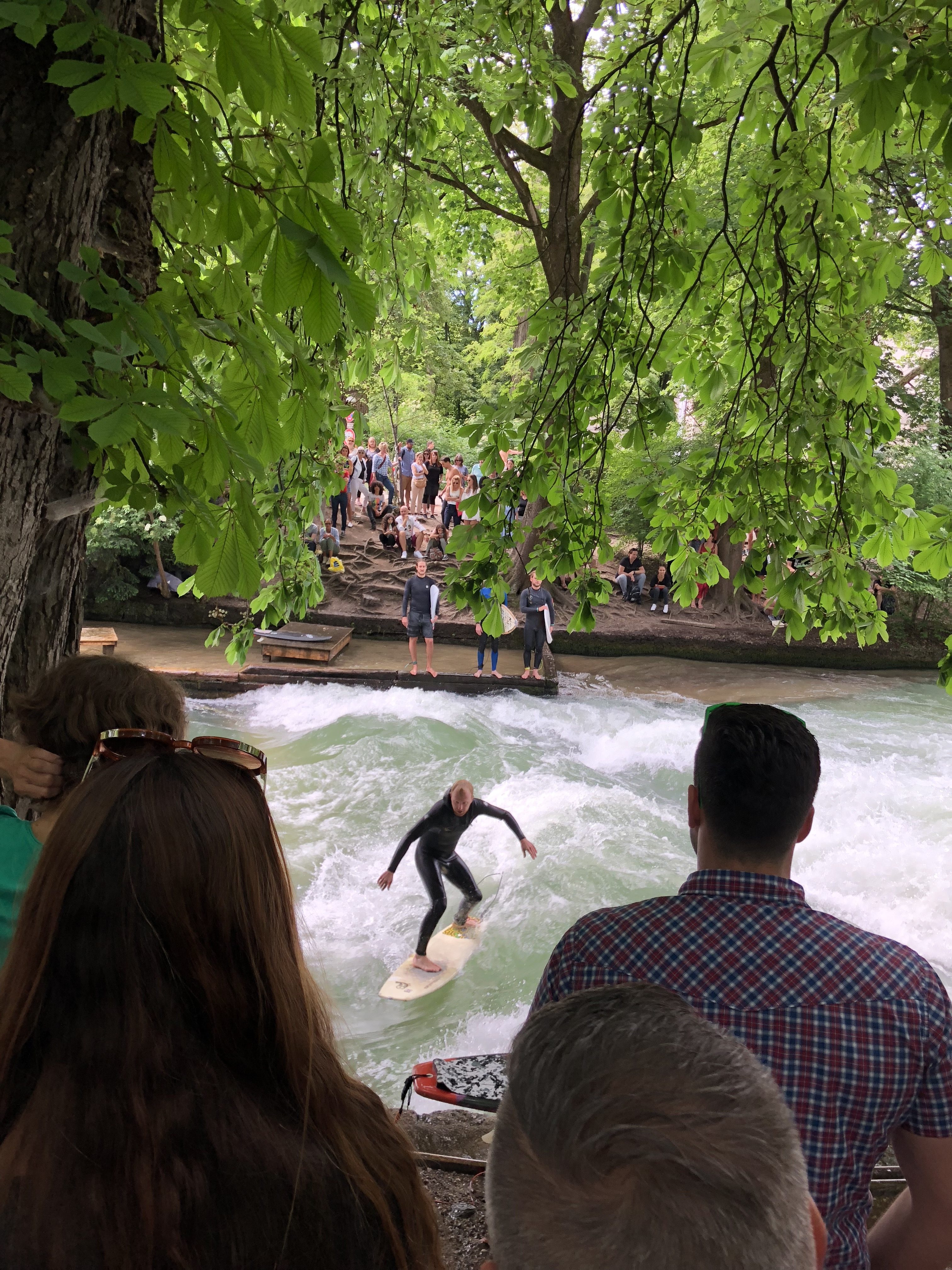 Stroll Around the English Garden/See the River Surfers– The English Garden was one of my favorite things we experienced in Munich.  This is a large public park in the center of Munich full of rivers, streams, gardens, and bike/walking paths.  We witnessed several people laying out (there was even a nude section) along the river as we rode our bikes beside them along one of the many bike baths.  At the southern edge of the park, a man made river called The Eisbach flows at a quick pace. About fifteen years ago, a few of the locals noticed that every now and then, a wave about 4 feet high would appear.  Since then, the wave in The Eisbach has turned into a bonafide surfing destination.  We sat and watched as a line of 15 surfers formed as they took turns riding the wave on this river … it was a sight to see for sure! Also, if you are going to be in the English Garden, make sure you stop by the Chinese Beer Garden for a cafeteria style German food experience complete with all the beer you could imagine! 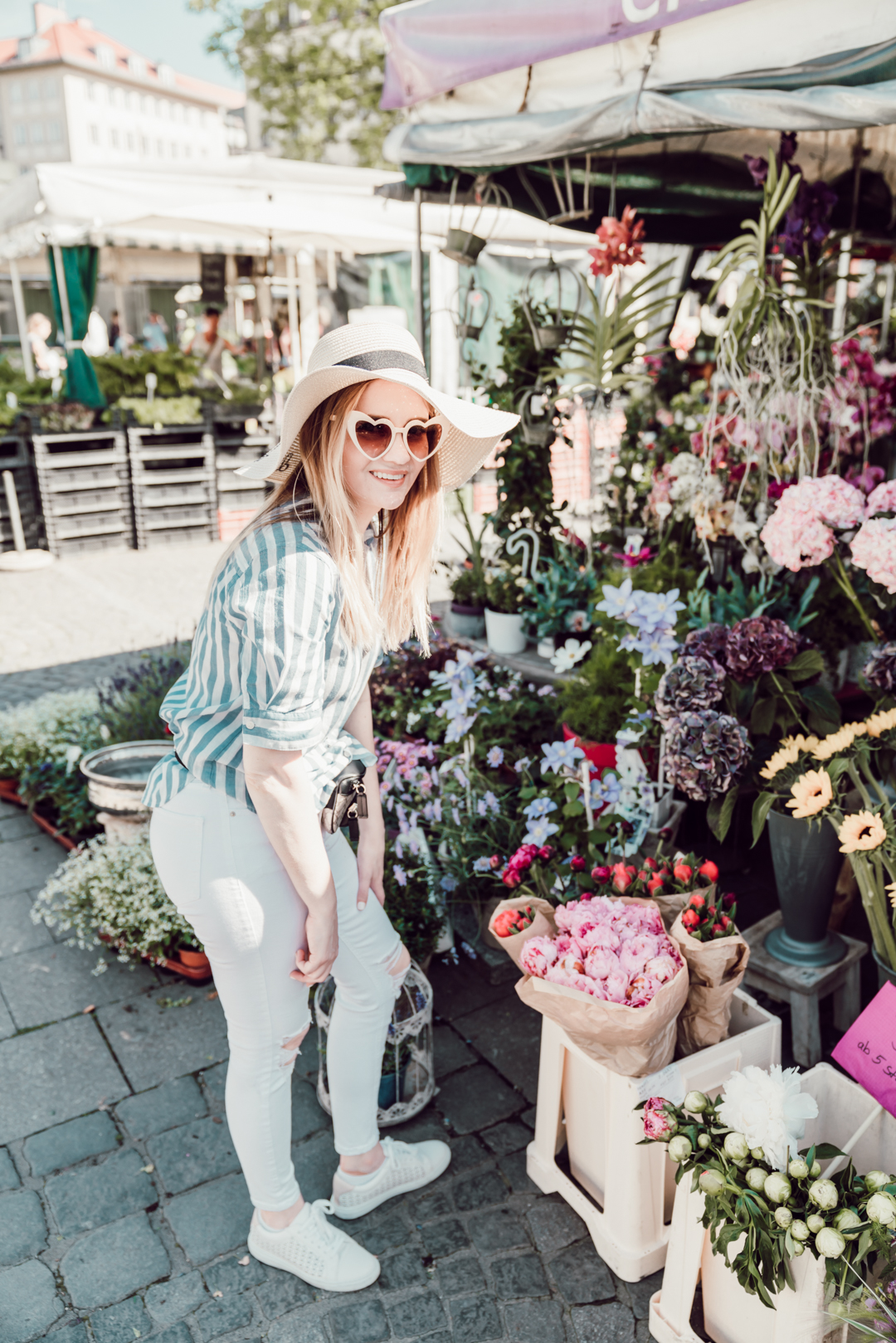 Stop by the Viktualienmarkt (street market)– the Viktualienmarkt is the city’s largest and most famous street market with items ranging from flowers, souvenirs, fruits & vegetables, knick knacks, and tons of local food.  There are several open seating areas set up where you can sit and eat your food and enjoy the people watching.  I ended up getting some fresh peonies for a photo shoot from a florist at the market who was so kind to wrap them up all special for me. 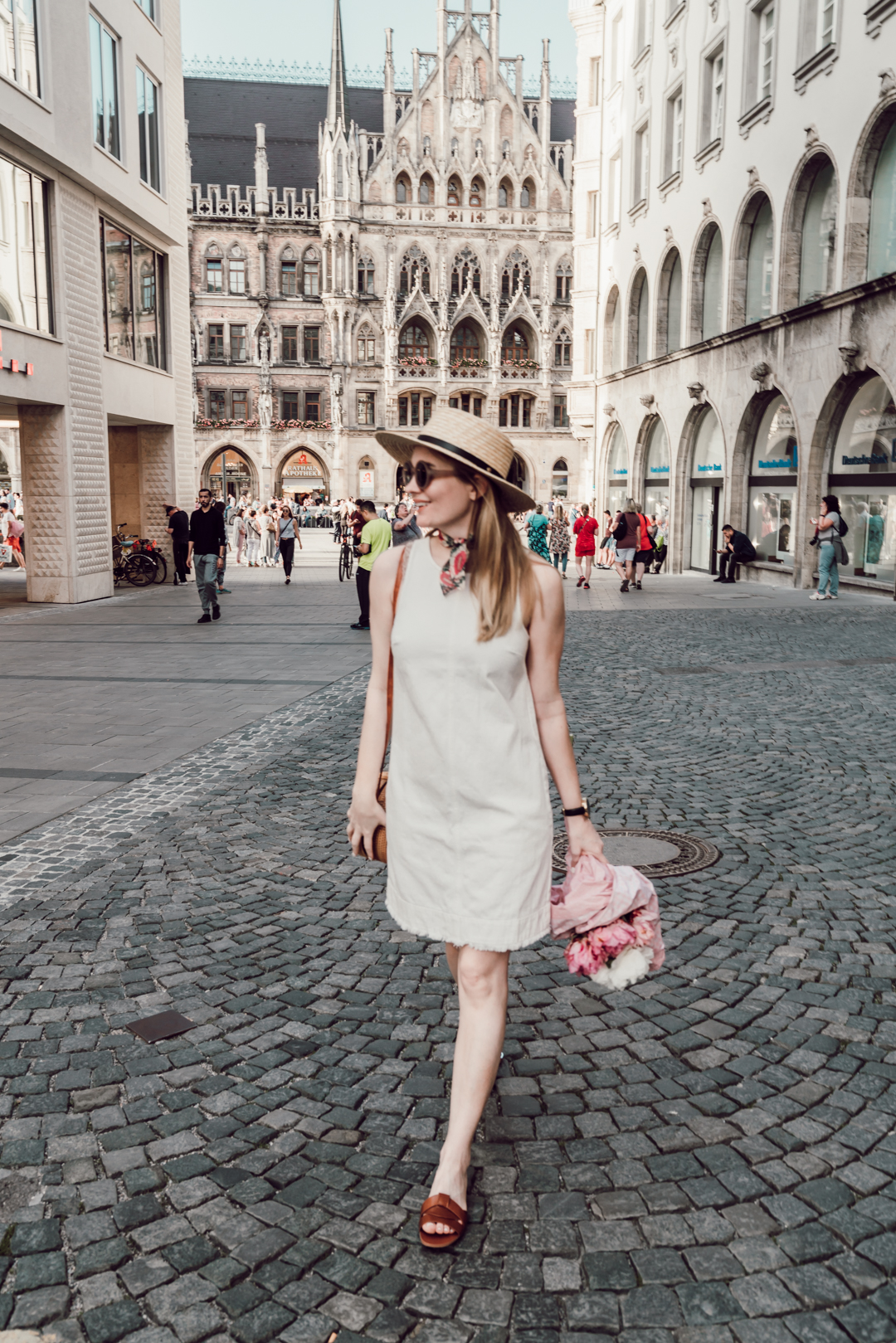 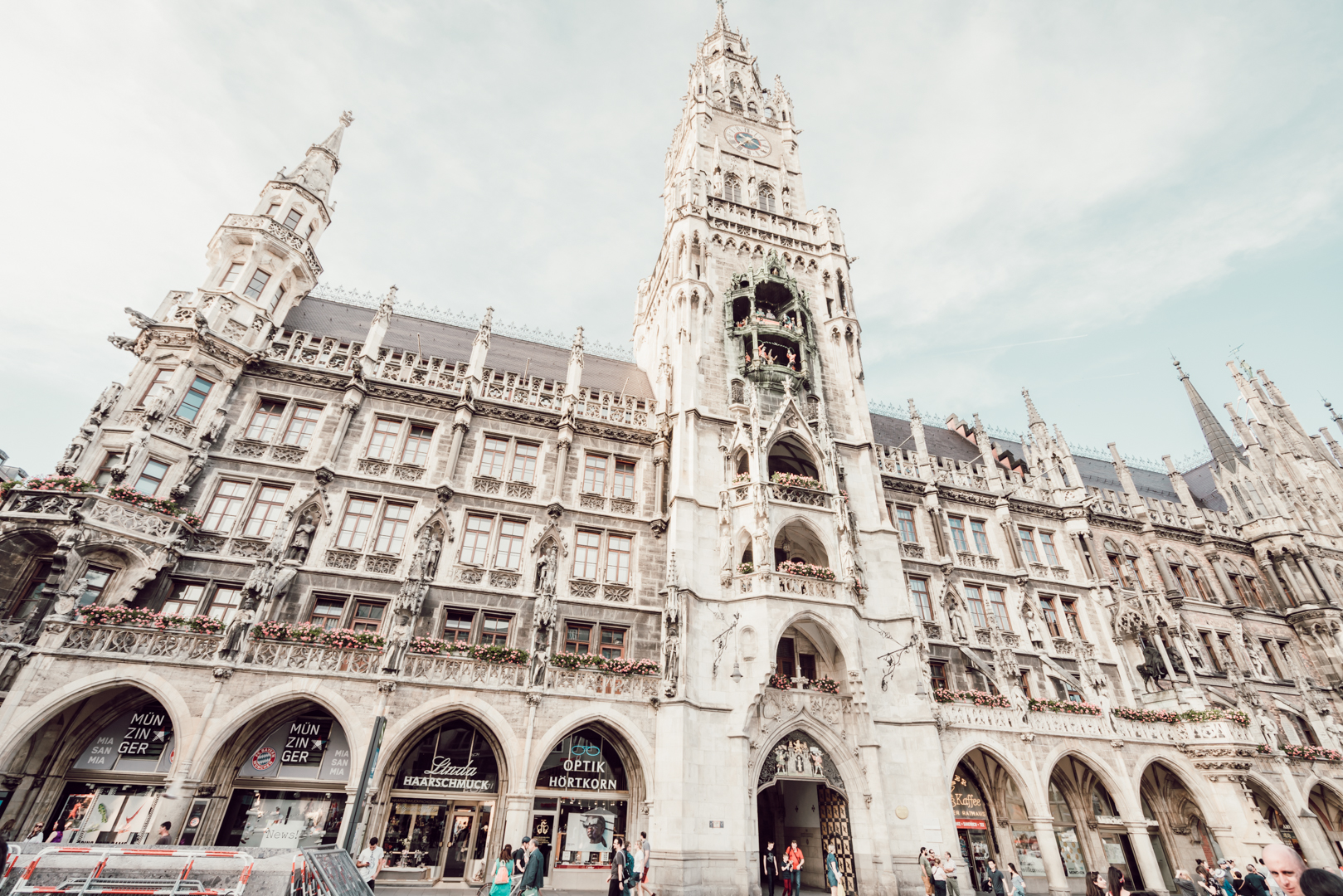 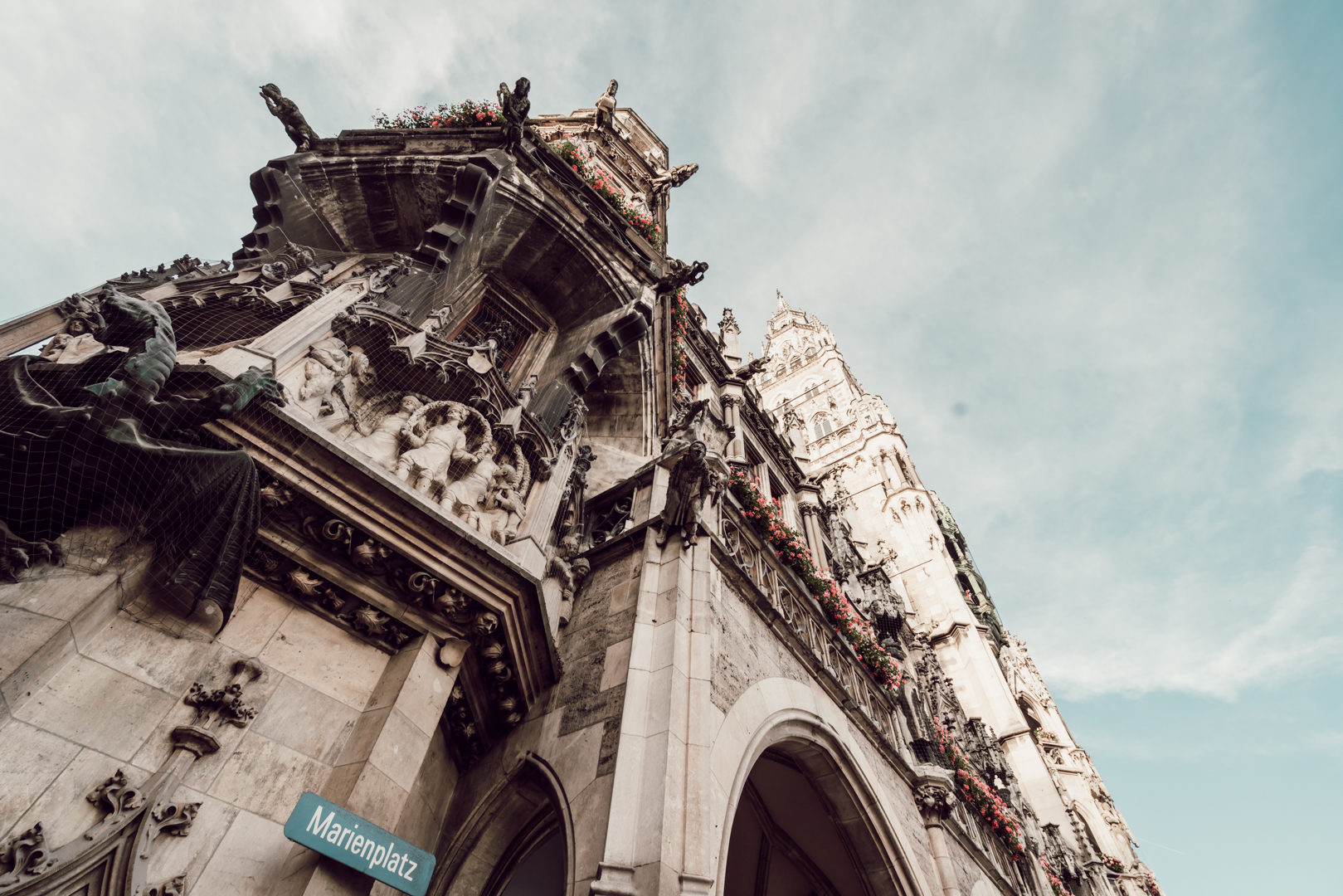 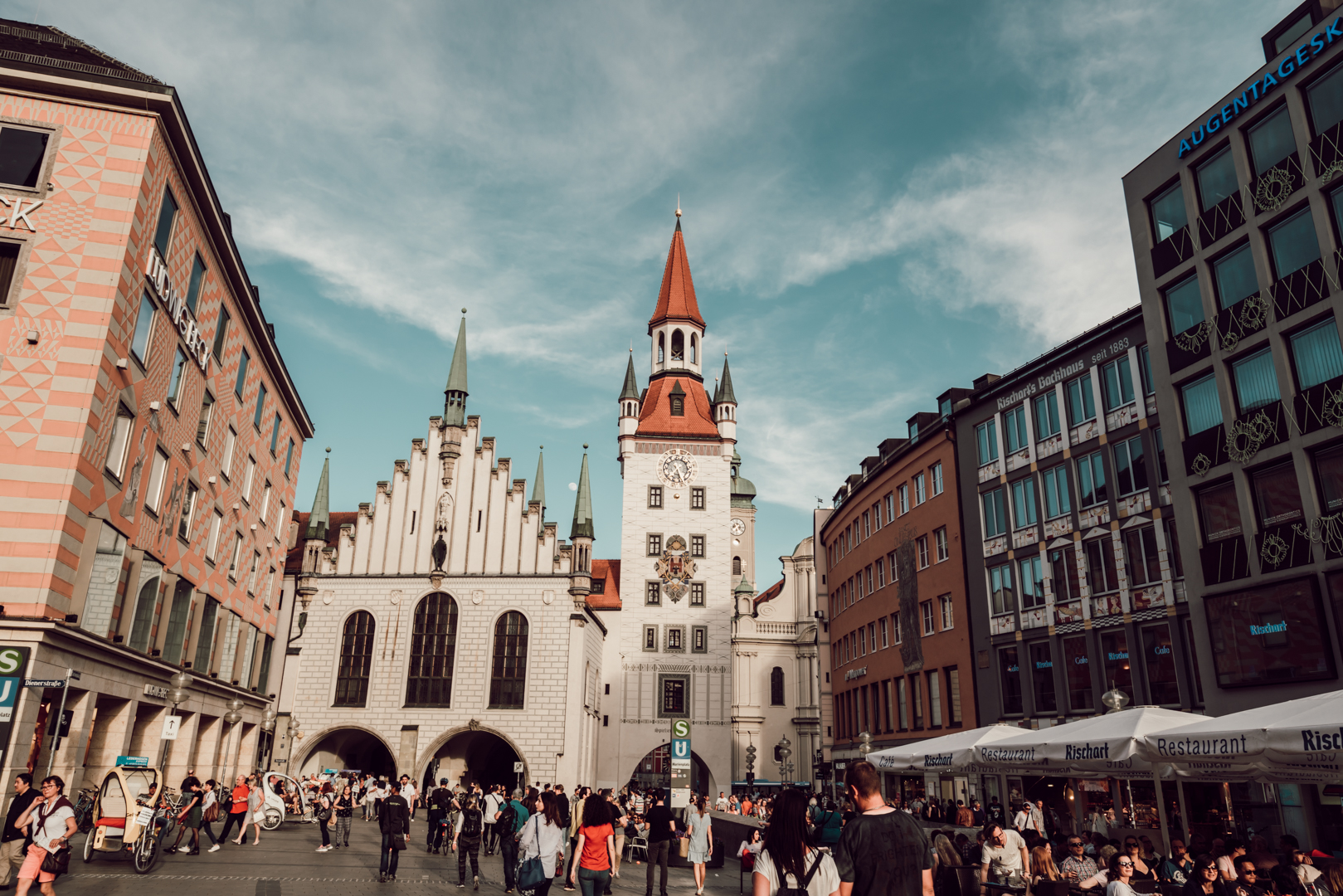 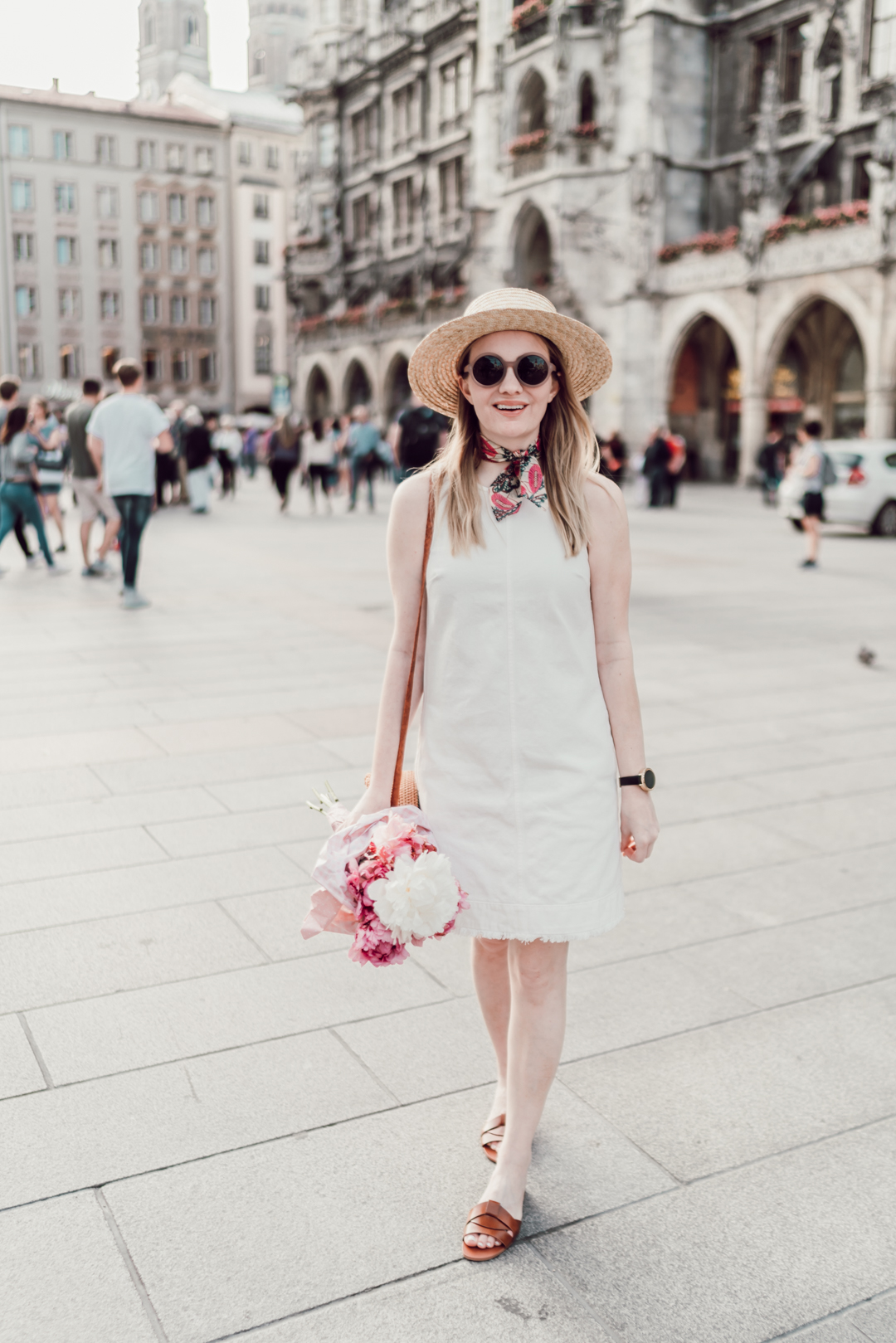 Head to the Marienplatz– the Marienplatz is a central square in the city center of Munich and has been the city’s main square since 1158.  We discovered that everything around the Marienplatz was poppin’, so we’d typically head out towards there every evening to do a little people watching before dinner and then we’d always end up going back after dinner to see some of the street artists and entertainers. 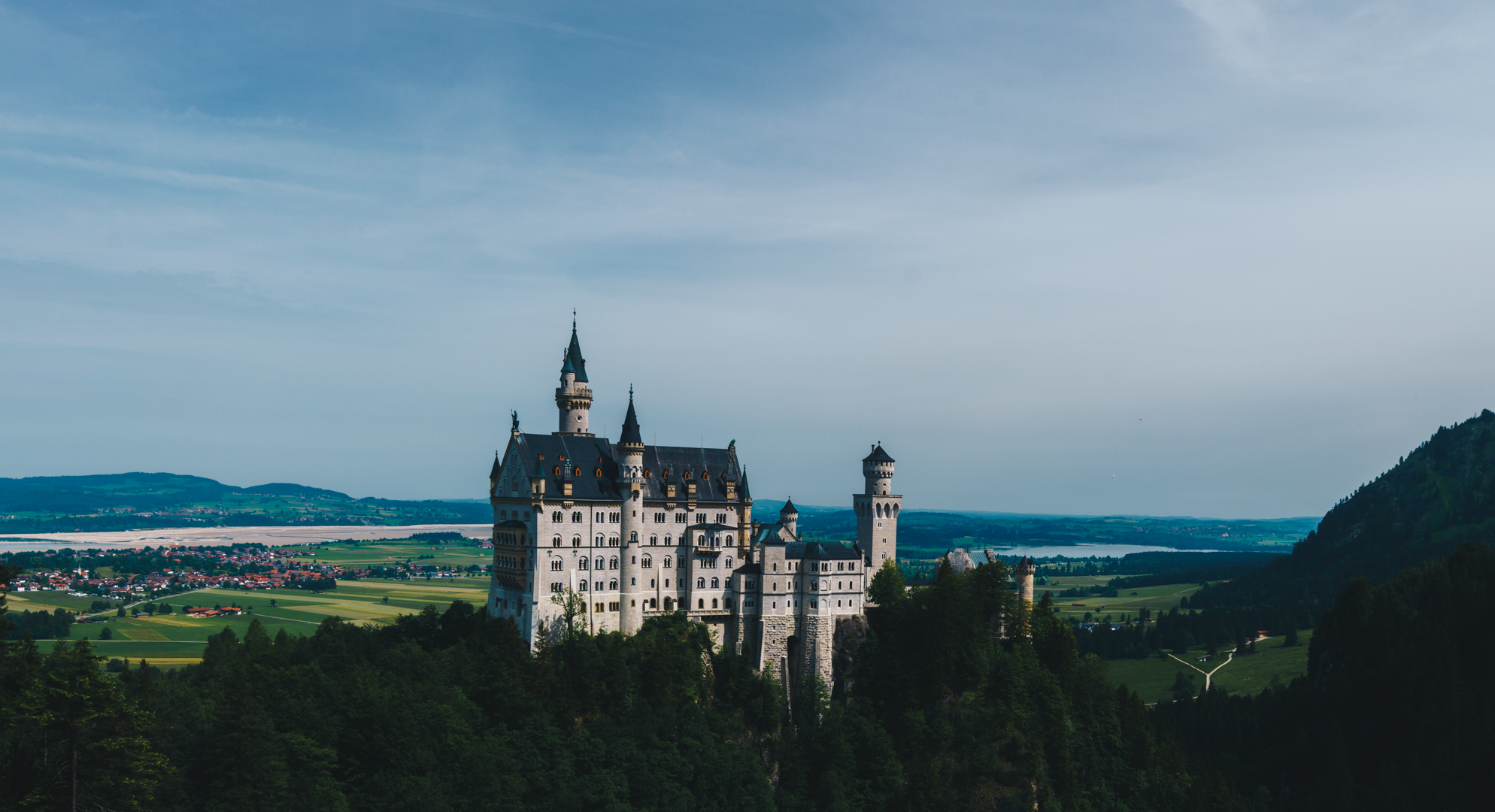 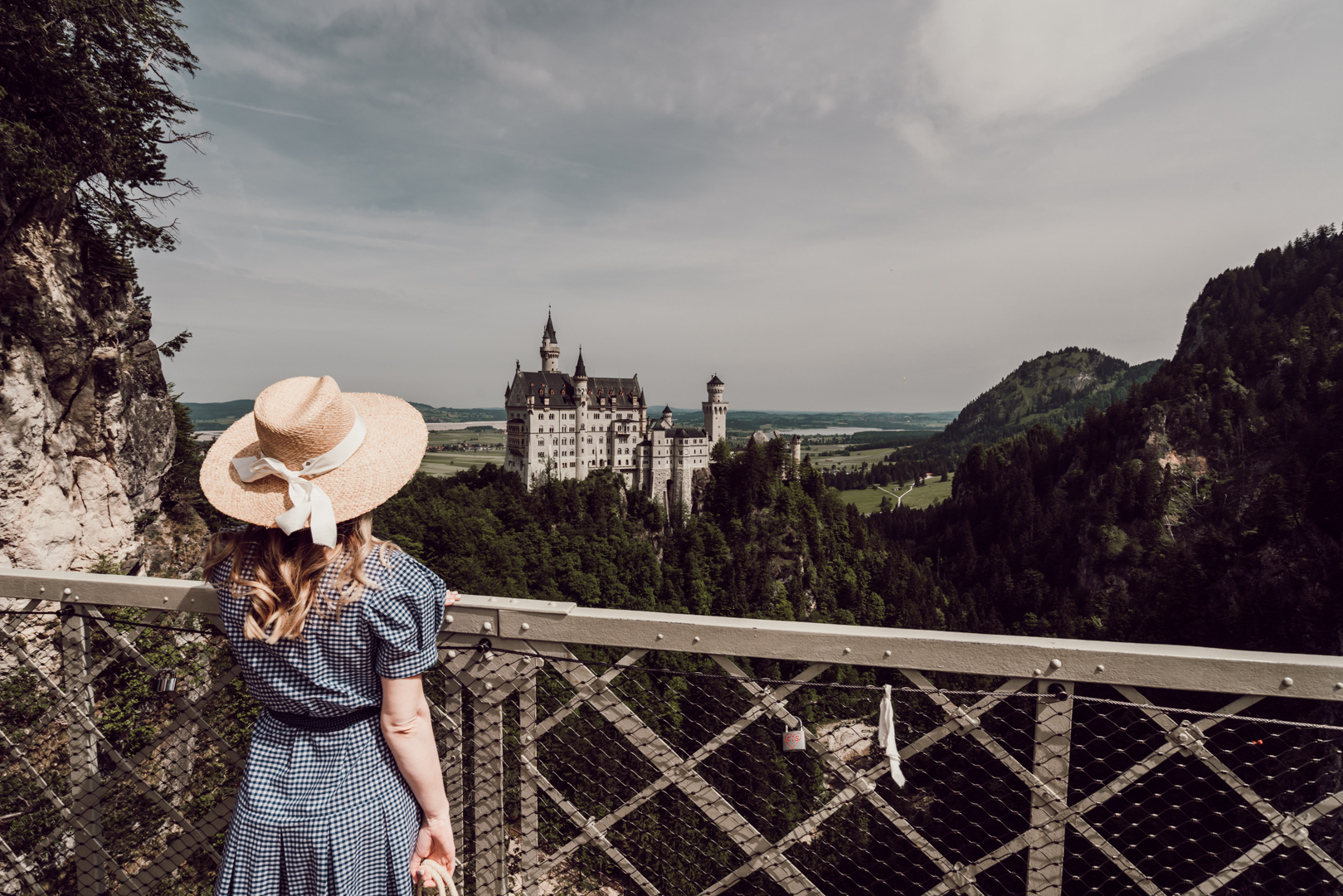 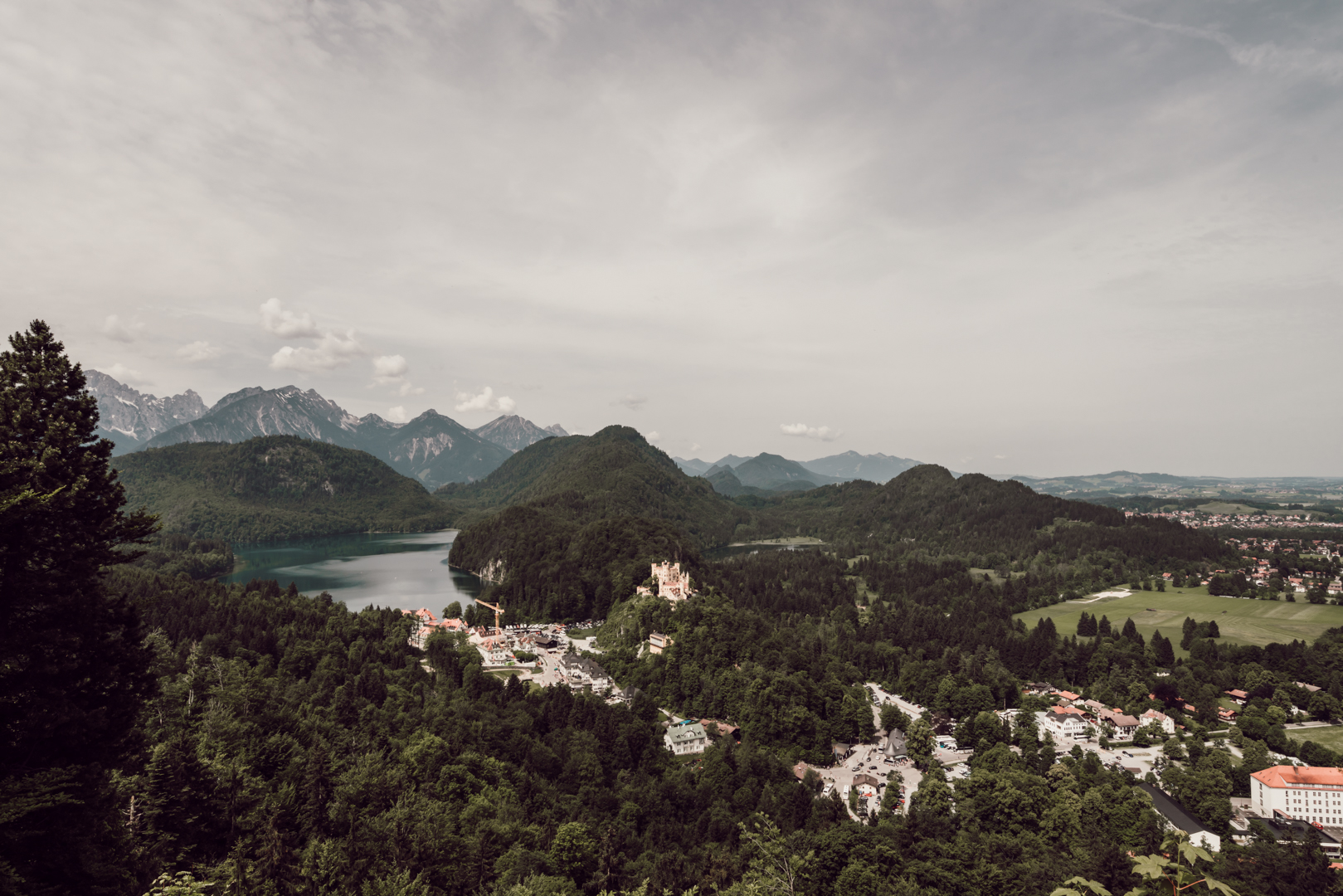 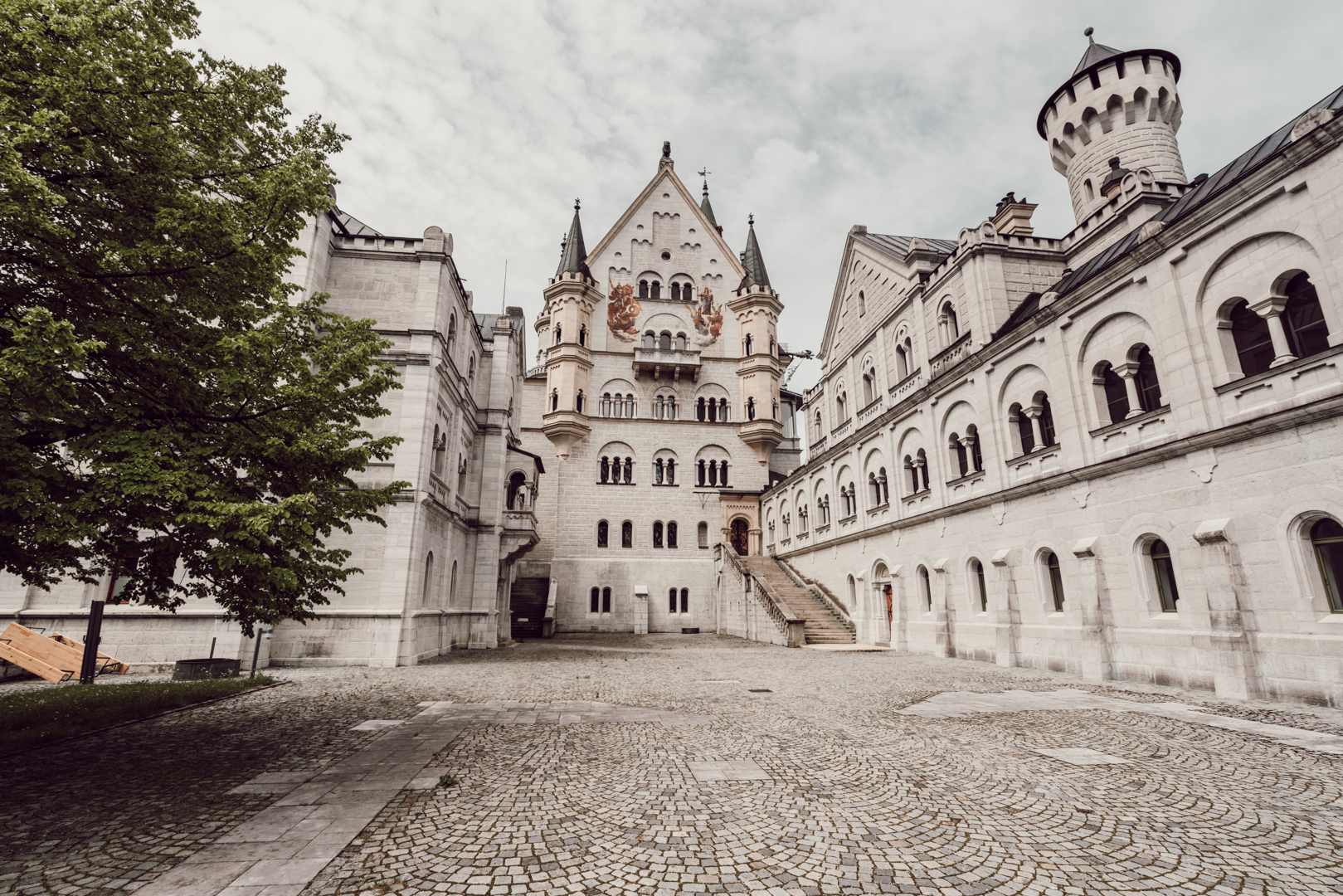 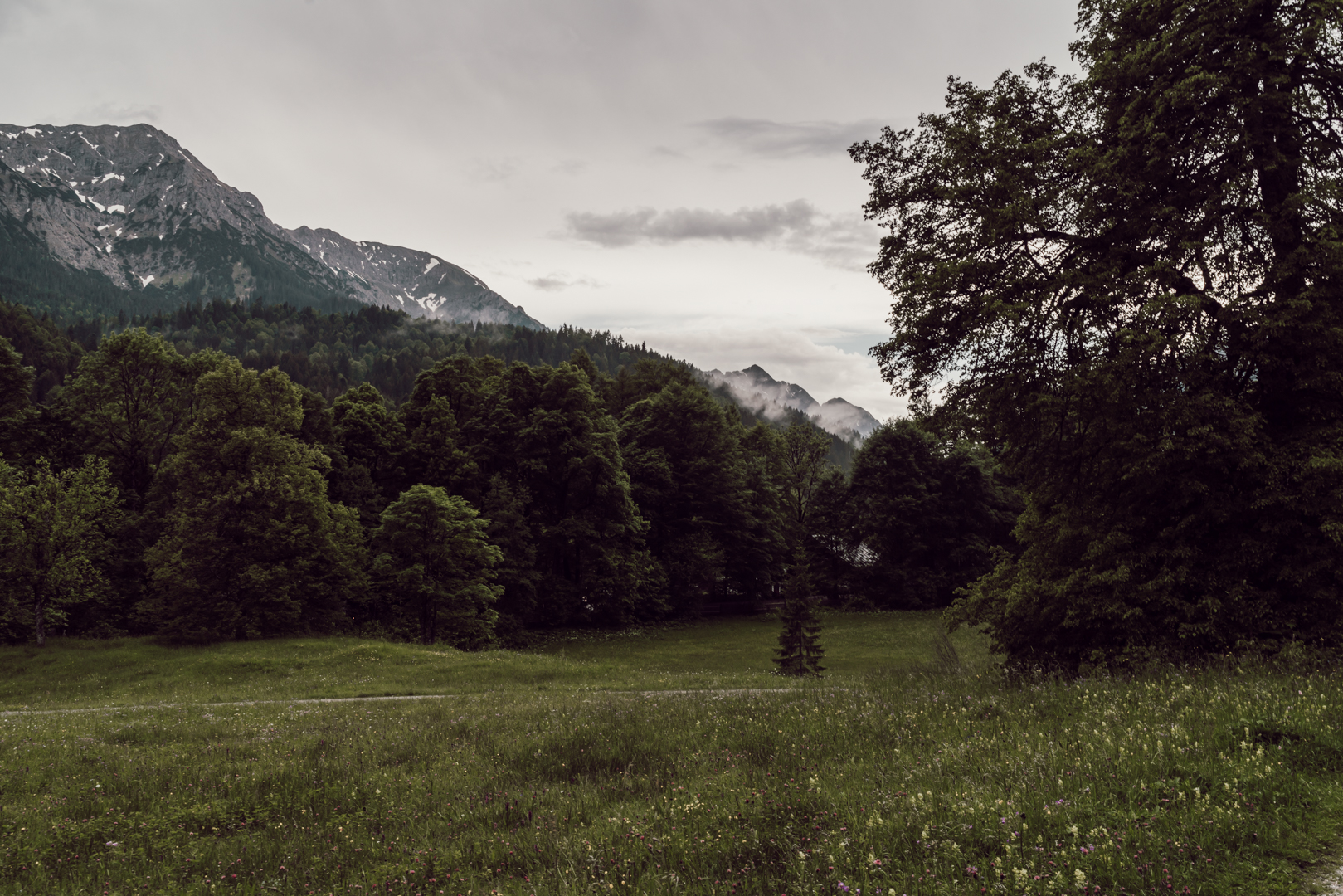 Take a Day Trip to Neuschwanstein Castle– you can read all about our day trip experience in this post here.  However, I felt I would be doing this Munich city guide an injustice if I didn’t include it in here as well.  Just trust me- if you’re going to Munich and will be there a couple of days, take one of those days and book a bus tour to the Bavarian Alps to see the Neuschwanstein Castle. 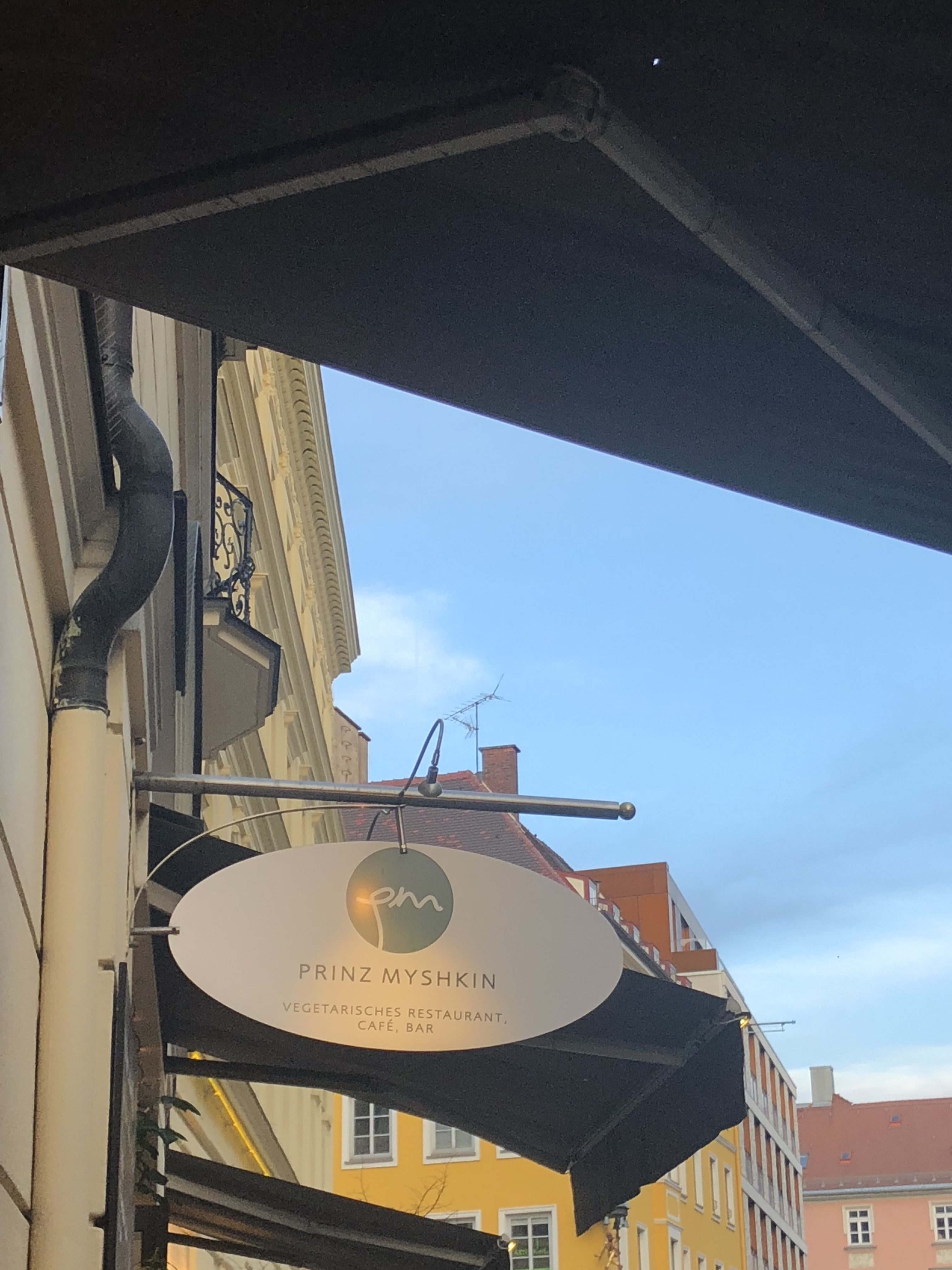 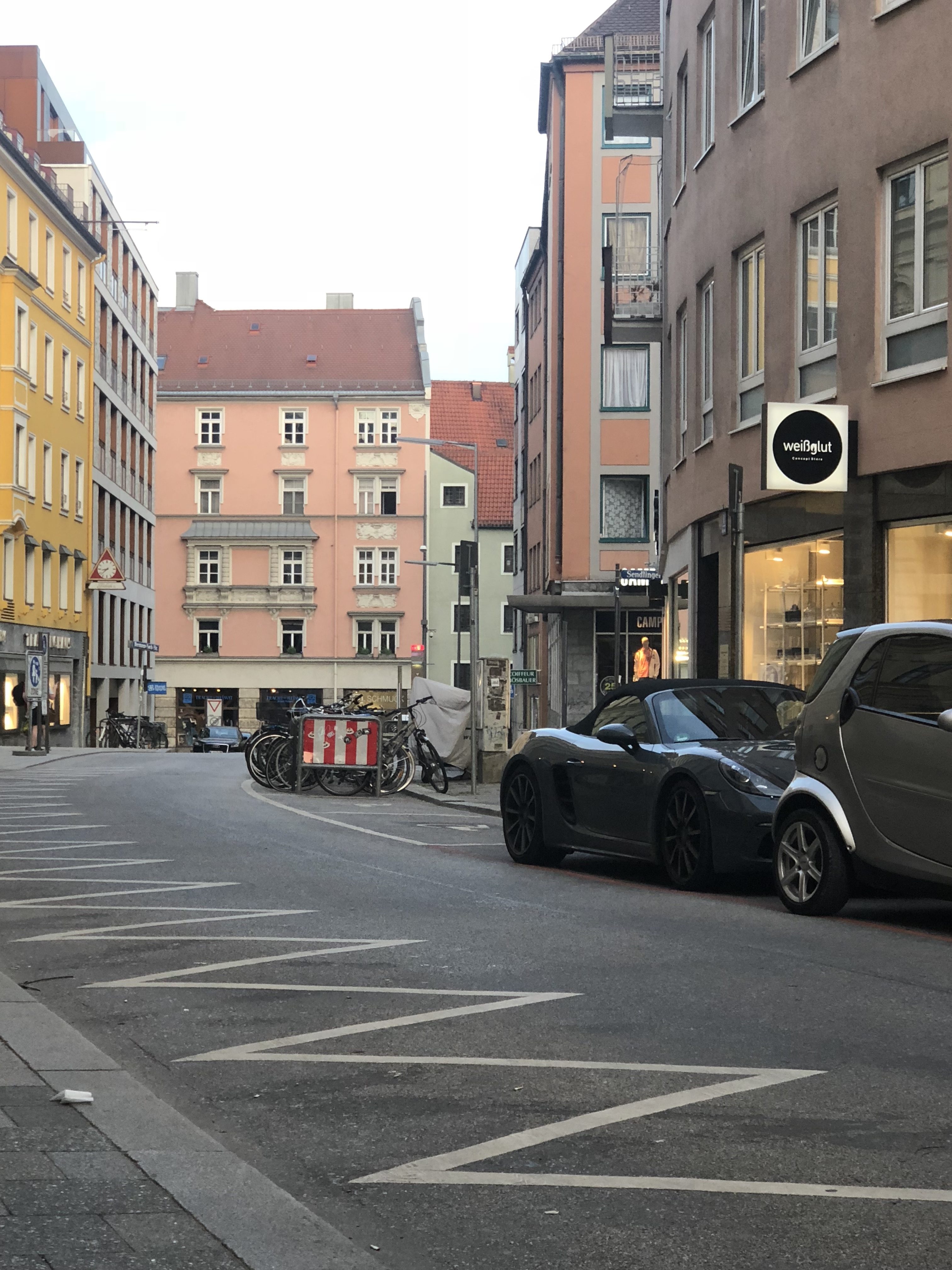 Other Eats: I couldn’t finish this city guide without including this incredible vegetarian restaurant that was recommended to us by one of our tour guides.  If you ever find yourself in Munich and you are a vegetarian (or not, really), please check out Prinz Myshkin for some downright delicious food.

Travel Tip: Munich is a very walkable city and we walked pretty much everywhere that we went besides our bike tour.  As always, I advise wearing comfortable shoes for walking and then bring nicer shoes if you want to change into there later or once you reach your destination.