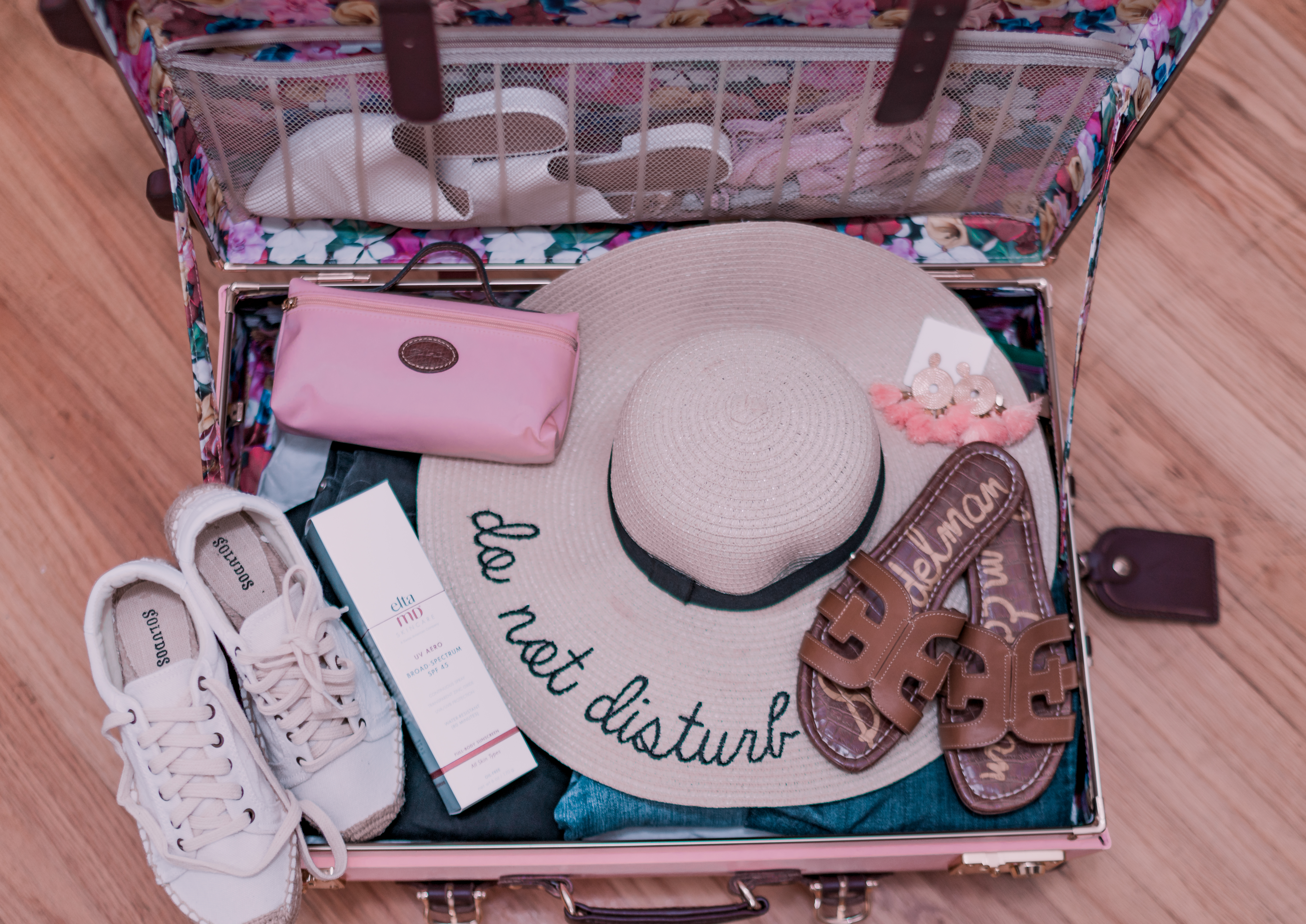 Y’all- I put so much time and effort into thinking about what I wanted to pack for Europe.  I spent hours browsing websites and ordering things that I wanted to wear for photoshoots, keeping in mind that I needed some new clothing and shoe items anyways, so it seemed like a good idea.  I placed a few online orders the weeks leading up to the trip and felt like I really had a good arsenal of shoes, bags, and basics.

I have admitted in the past that I hate packing and that it gives me anxiety, but I’ve really gotten better over the past year or so with planning ahead and making sure things are organized.  I had this genius idea to pack all of my shoes in a backpack to carry with me on the planes and trains so that I had space freed up in my suitcase.  Keep this in mind for later in this story …

I also decided to pack toiletries and nighttime necessities in little separate bags.  I then put all of the little bags in a huge travel tote that I took with me on the plane.  Again, I thought I was being so organized because I was categorizing items into smaller bags.  I boarded our flight with my huge tote of essentials thinking I was the most organized person in the world.

My first lesson to you in the Megan’s Packing Mishaps story is this- please for the love of God check your area on the plane BEFORE you get off the plane to make sure you gathered all of your belongings.  This past December I actually left my laptop on a flight to San Francisco and they were never able to “recover” it.  I remembered exactly where I left it and was able to tell them the serial number and exact seat number where the laptop was left and nothing.  You would think that I learned my lesson that time, but nope, I did not.  On our flight from JFK to Prague, I had my big tote of smaller bags on the floor of the plane and somehow, my med bag rolled out and when I got off the plane … you guessed it … the med bag was under the seat in front of me.  I realized this around 2-3 hours after we arrived in Prague and I frantically called the airport, the lost and found, and the taxi company we had taken from the airport to our hotel.  I was finally able to track down the baggage office for the airport where they had my bag and said I could come pick it up.  I got really lucky because no one tried to steal it or take anything from the bag.

Let’s move on to our next packing mishap … remember me telling you about the bag of shoes?  We left Prague for Budapest via train and the train was organized into little rooms for 6 seats with luggage carts above the seats, if that makes sense.  Our train ride included many stops, so people were getting on and off and other passengers were constantly coming and going from our little room of 6 seats.  I had placed the backpack on one of the racks and when we reached our stop I was so frazzled with getting out of that little cabin without waking anyone up or running into anyone that I completely forgot to grab the bag of shoes.  I didn’t realize this until THE NEXT DAY when I was looking for a pair of shoes and couldn’t find the bag.  I called the train station, but the train had been gone then for 24 hours and had many stops after we got off, so the shoe bag was a lost cause.

Next, let’s move on to Munich, which was one of my favorite cities that we visited in Europe.  I had this awesome pair of white jeans that I was so excited about wearing and sharing with you all, because they were perfectly distressed and high-waisted and I loved them.  I wore the white jeans on a bike tour (probably not the best idea) and I was sharing them on insta-stories talking about how great they were when I dropped an ENTIRE coffee on them.  I tried to pour water and dilute the stains, but had to continue on the entire bike tour looking like I had just pooped my pants.  When we got back to the hotel I attempted to wash them in the sink, which was surprisingly pretty successful.  I hung them up to dry on the towel rack and when we left for our next destination, guess where the jeans stayed?  That’s right … on the towel rack.

My next mishap began when we took a luxury bus to the castles of Germany.  Of course, I was wearing a straw hat because I basically lived in those the entire trip, but when we boarded the bus for our 2 hour trip home I was over the hat and placed it on the top rack of the bus.  When the bus trip was over I exited the bus and guess what was still on the bus?  That’s right, the straw hat.

Okay, so that was a really long story just to say that I am an unorganized mess who is also a klutz that spills things on my clothes.  I can absolutely 100% guarantee you that if I am wearing something white or something nice I will no doubt spill something on myself.  All of my pictures may look super curated like I am the most organized person ever, but I promise you I am the biggest hot mess ever.