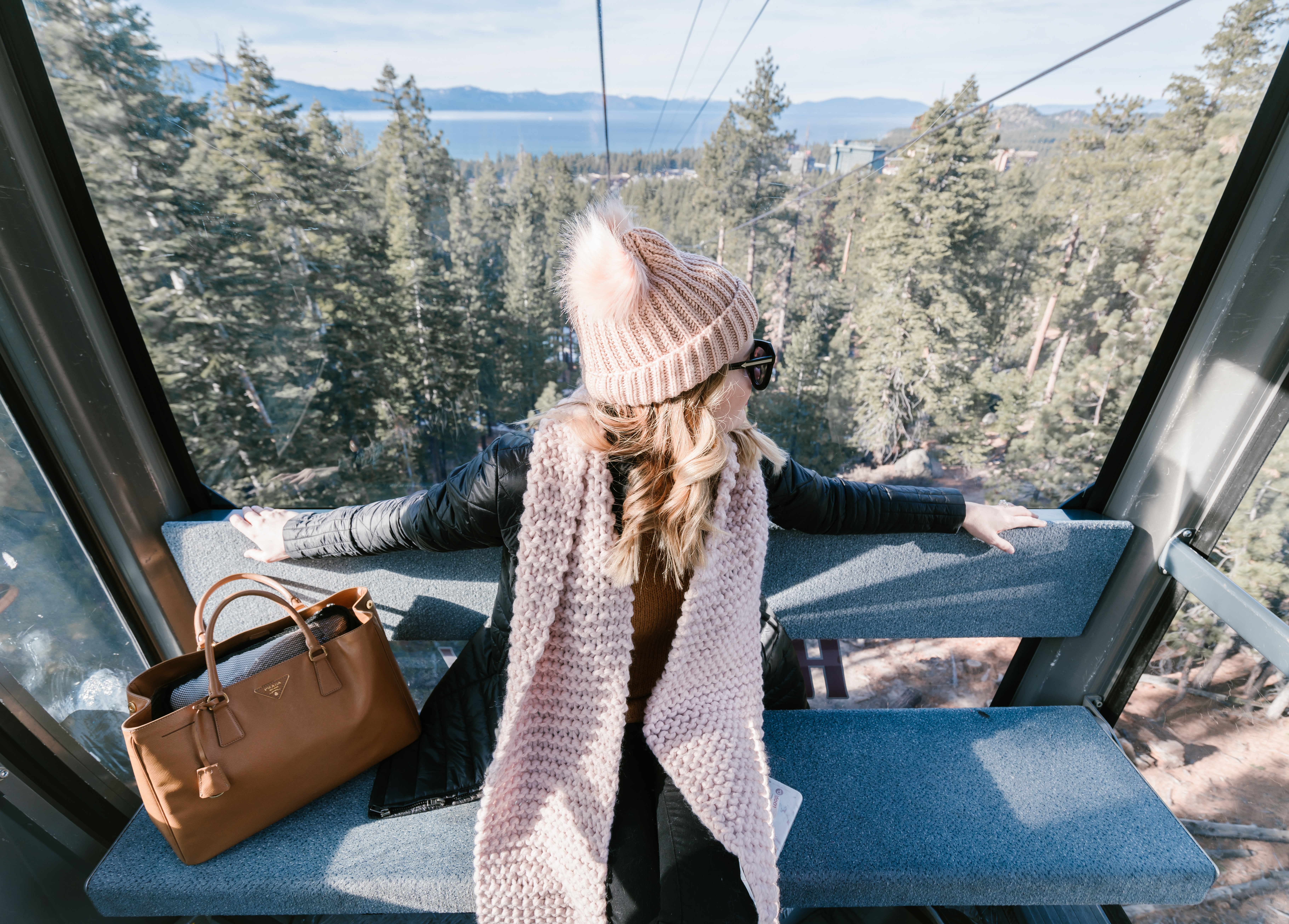 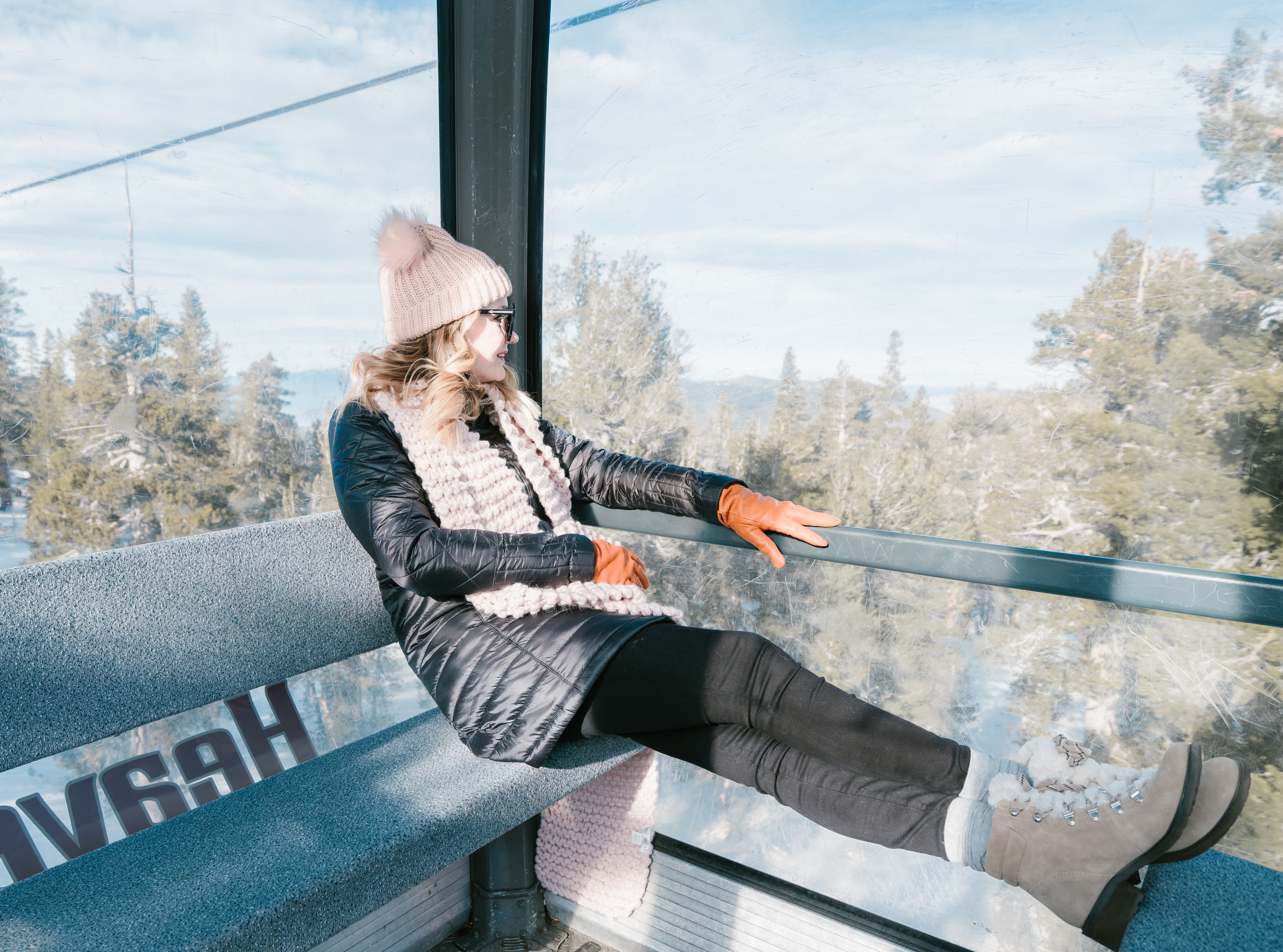 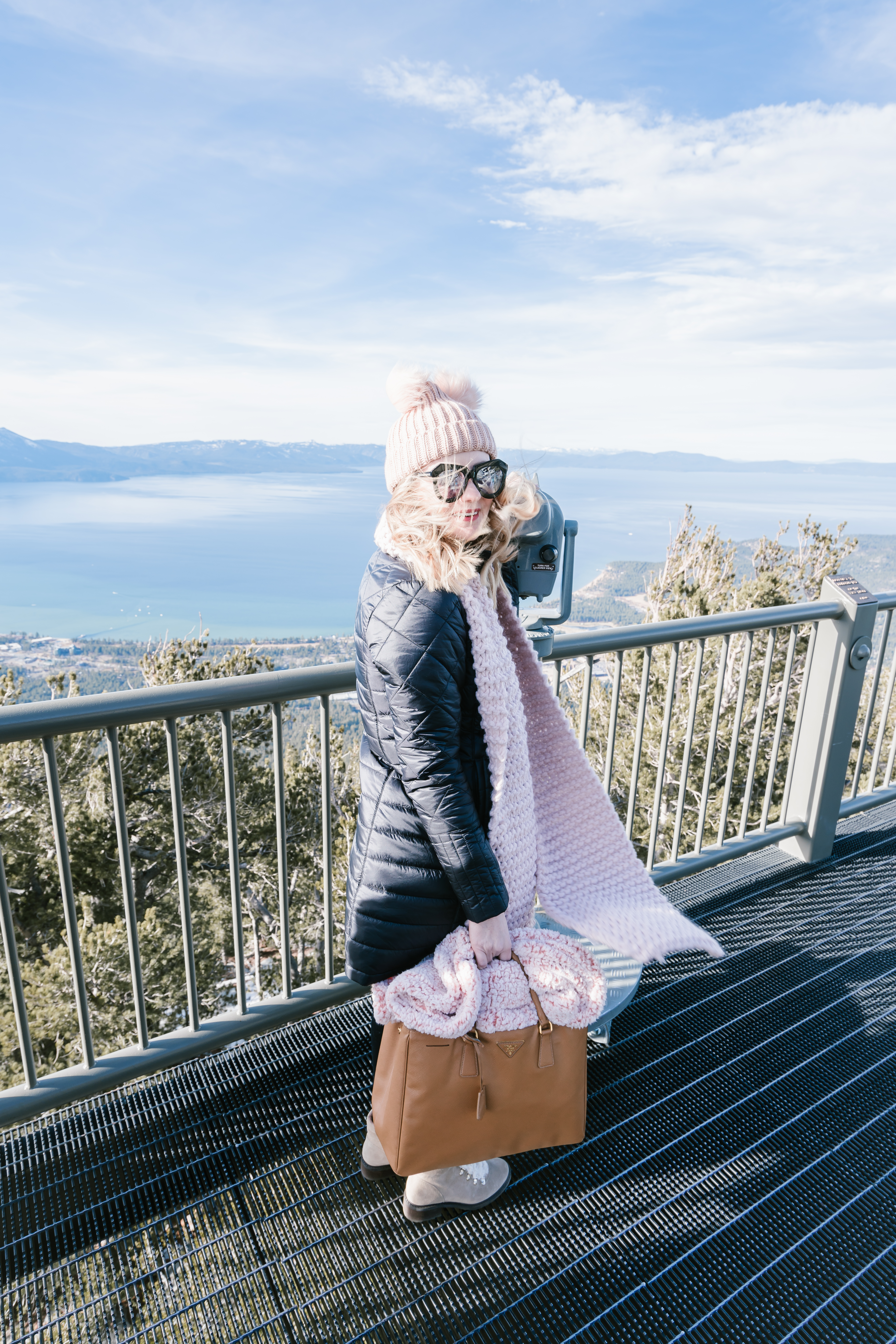 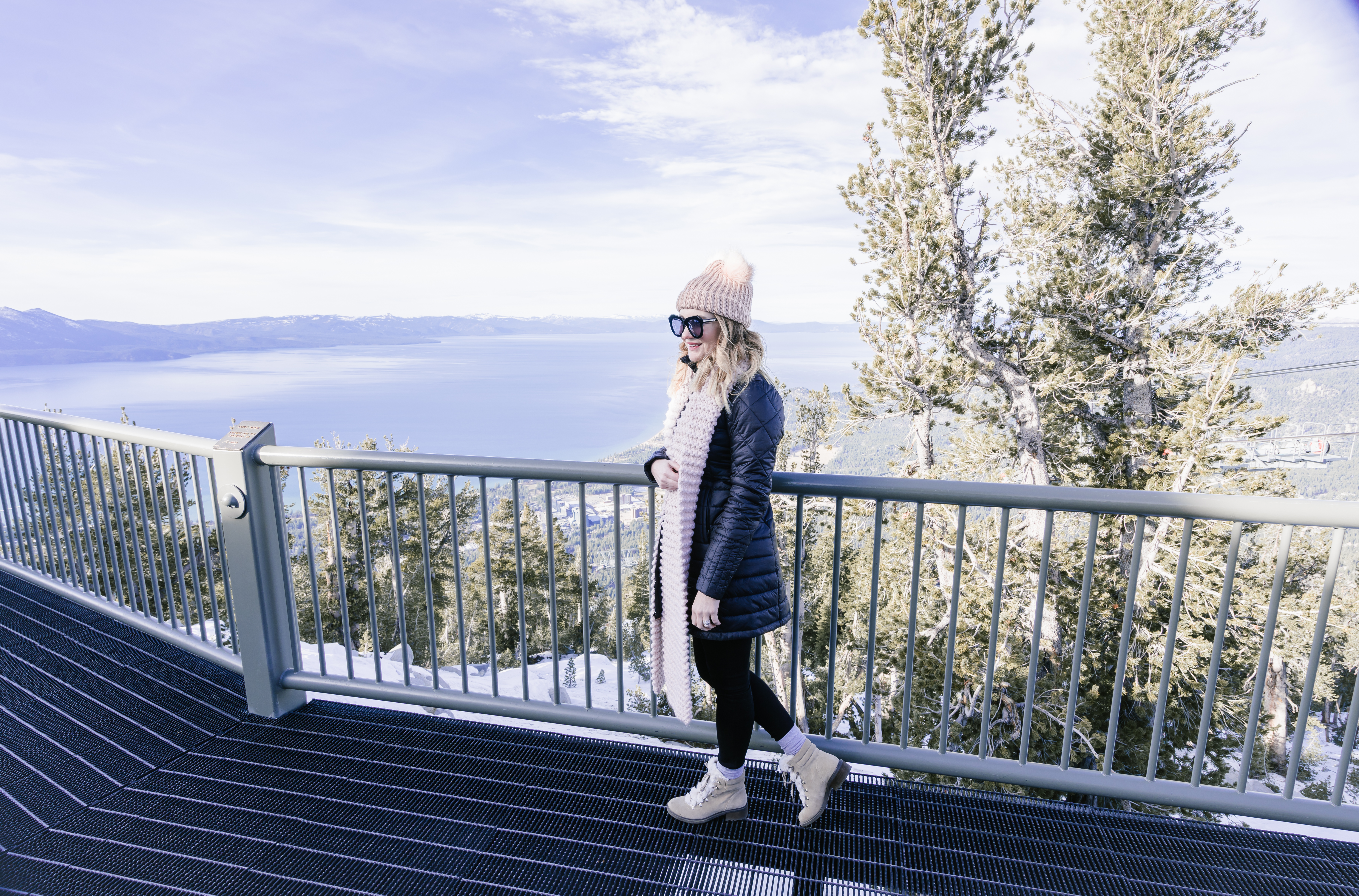 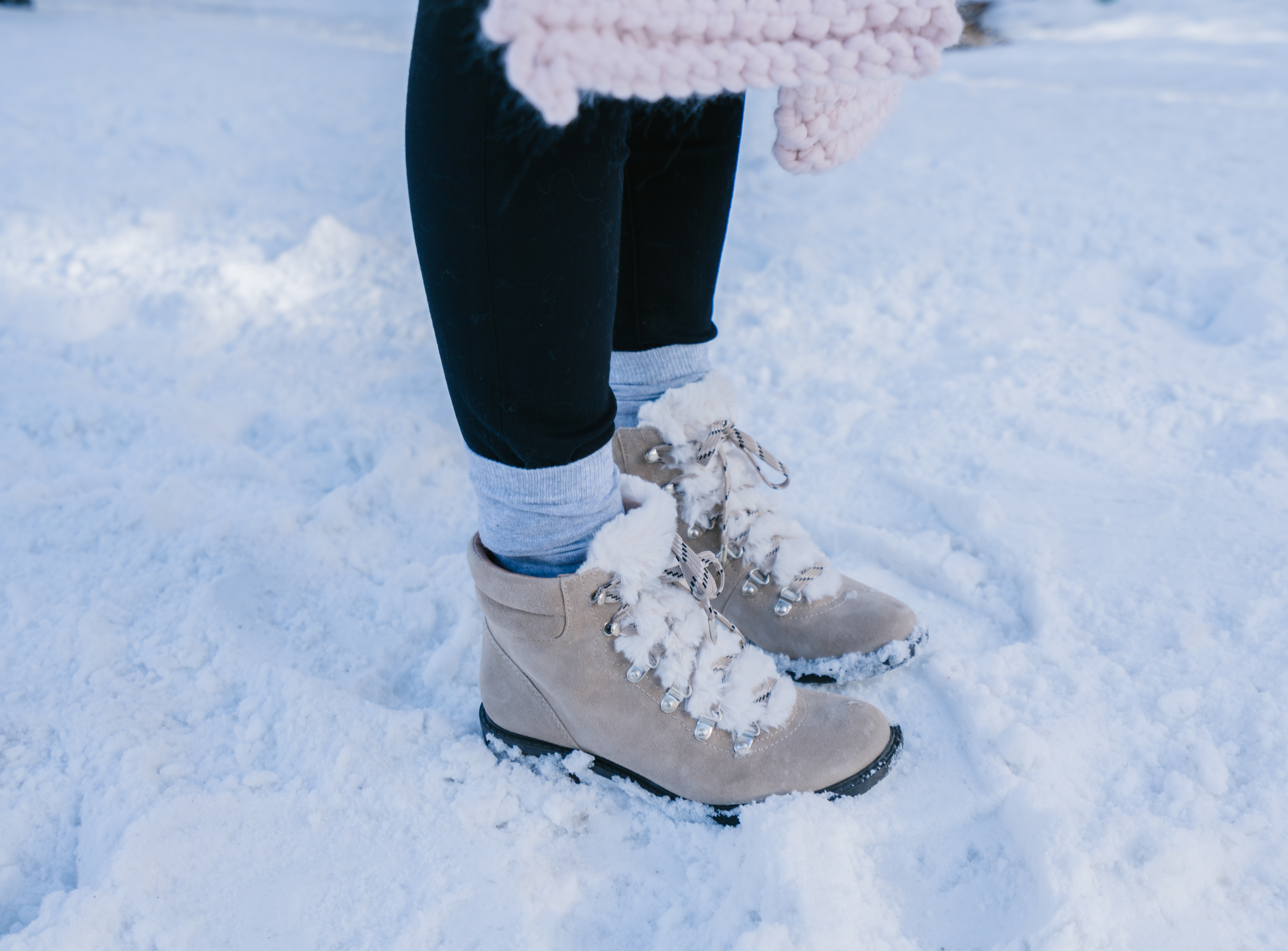 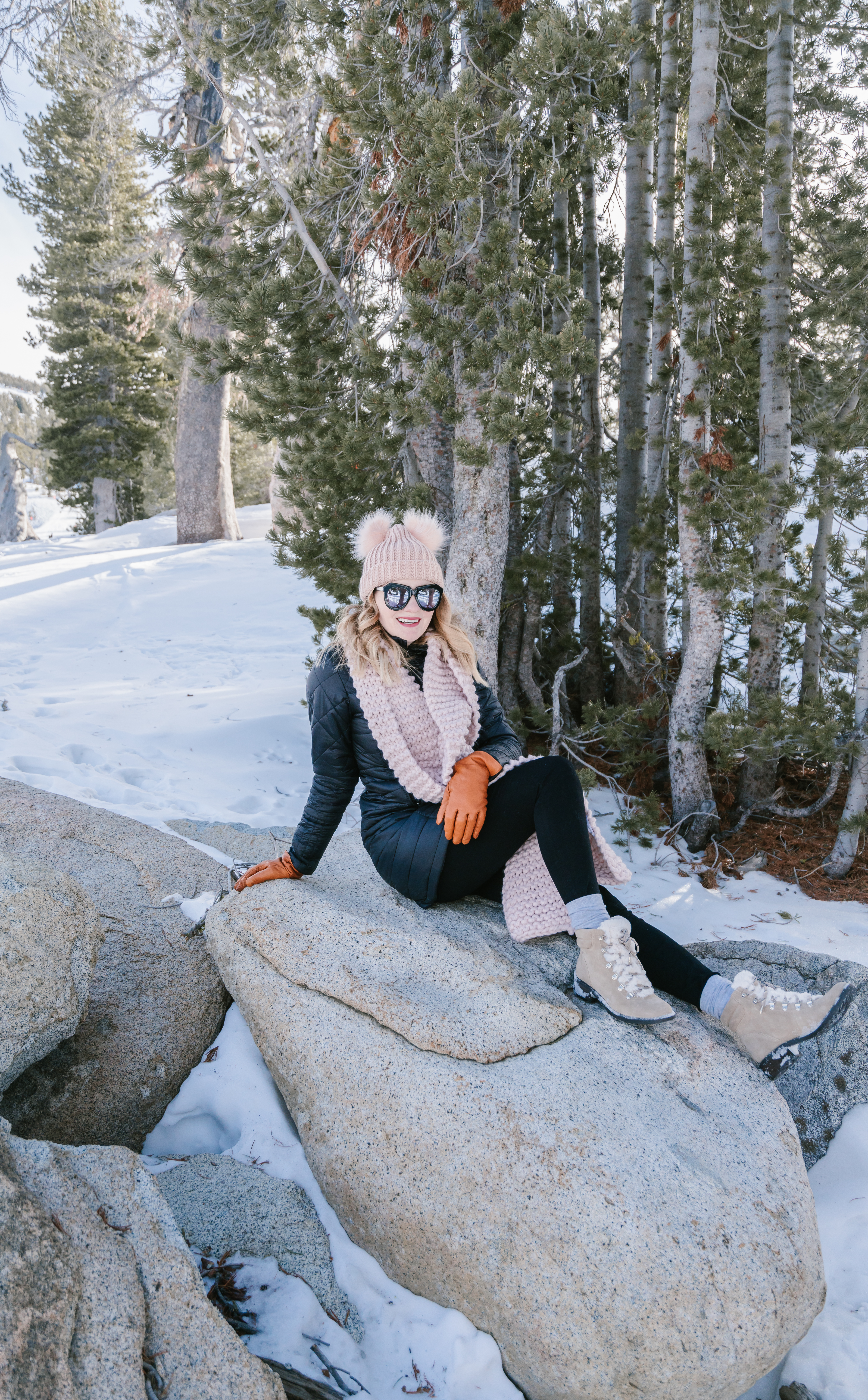 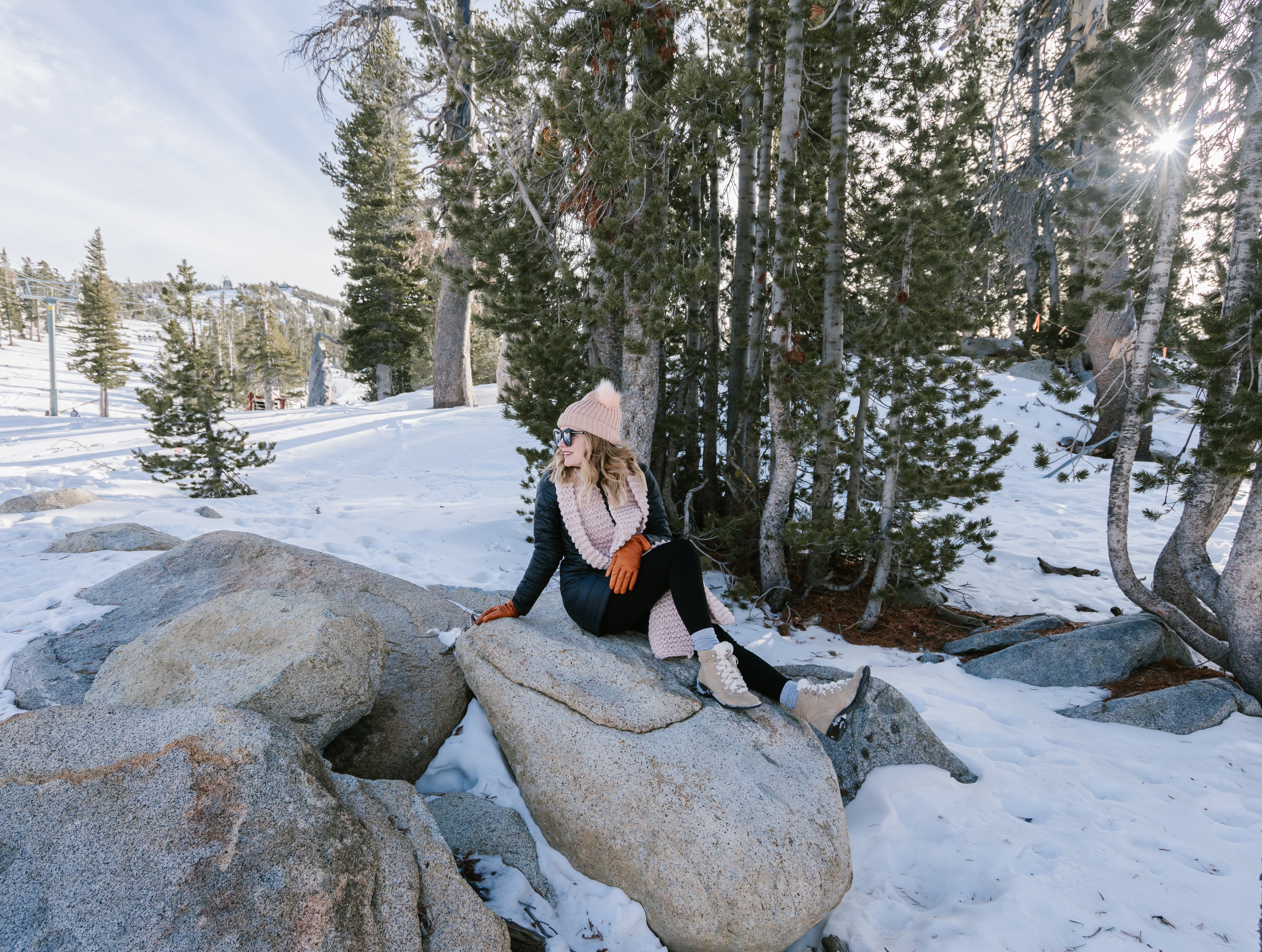 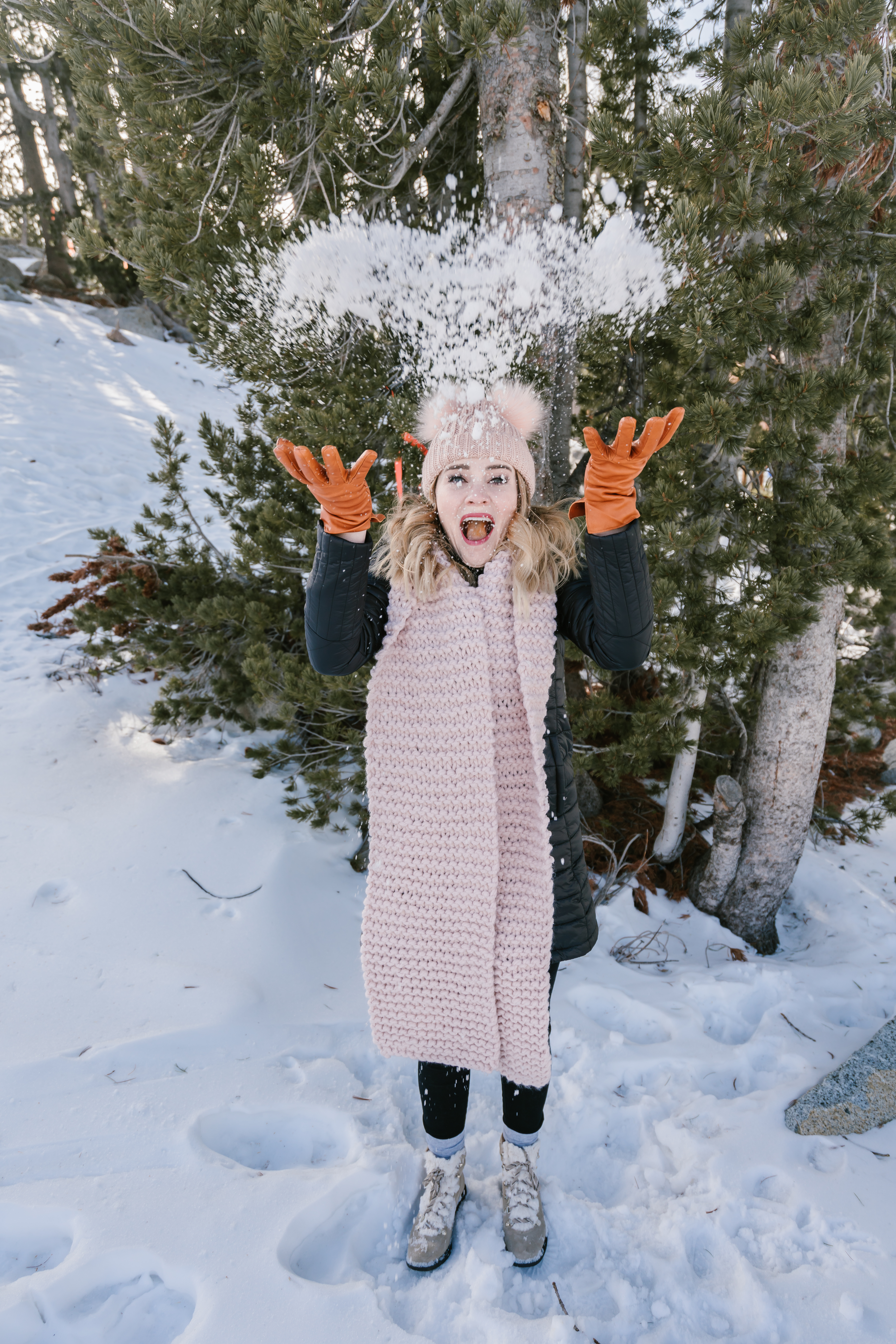 Going somewhere cold soon?  Or do you live in 85% of the US where we are experiencing Arctic temperatures and snow? If so, this is the outfit for you! I wore this while trekking up the mountain at Heavenly Ski Resort in South Lake Tahoe, California and stayed plenty warm.  I will have a full recap of my whole trip to San Francisco, Reno, and Lake Tahoe next week, but for now I will tell you about South Lake Tahoe!  We embarked on our Lake Tahoe journey really not knowing where to go or where we would end up.  I am an OCD travel researcher, but there are so many spots along Lake Tahoe that I was honestly overwhelmed and felt it would be best for us to just experience the whole lake.   We started out at North Tahoe but drove around to South Tahoe because we googled the best views of the lake and Ski Heavenly came up.  I have to say, the vibe in South Lake Tahoe was poppin’ and I wish we could have stayed longer.  There were live bands playing music outside, tons of people walking around, a lot of cute little shops, and an overall happy and pleasant feeling in the air.  Rob enjoys skiing but honestly, I’m not really a fan, and I just wanted to see some snow, so we paid to ride the gondola up the mountain to the Ski Heavenly Resort .  It was easy to get off at the sightseeing stop and catch all of the insane views from the top of the hill.  After taking some pictures we rode to the second stop where we got some lunch and looked around.

It’s no secret that I love traveling, and what a cool time to be alive that I can share these experiences with you all by taking you along with me via Insta Stories, Vlogs, Blog Posts, and IG Pics.  Obviously, I love fashion, shopping, and trends, but deep down my #1 passion has always been travel.  I have always had the travel bug and I can remember being in high school and planning trips for my mom and I to go to Mexico, NYC, and other places like I was a travel agent.  I used to think being a travel agent would be the coolest job in the world.  I went into college knowing that I wanted to study abroad in France because I had taken HS French was was continuing it into college courses as well.  I left to study abroad not knowing a soul and felt terrified but at the same time so alive and my brain filled with dreams of adventure and discovery.  I always think that to get the true experience of travel, you have to have adventure.  That’s why I love renting a car and just going exploring to nearby cities, landmarks, and sights.  It’s become part of my travel routine and I can truly say that I’ve gotten to see some pretty cool things that I wouldn’t have otherwise seen if it weren’t for renting a car and just going on a roadtrip.  Anyways, that was a lot of nonsense to basically say that I can’t wait to share more excursions and adventures with you all and while this will always be a mix of fashion, lifestyle, beauty, and travel, I am so excited to incorporate more travel into 2018!

I already have a few travel plans for the beginning of the year including Park City, Utah and Los Angeles in February and DC in the spring, but I wanted to list some places that I am dying to go and see if you all have any input in where you would love to see PIPM go this year (or next year, for that matter).  Just a warning, some of these are really “out there” and some are super basic, but I’d love to get your all’s input.

Paris/London/Italy– I feel like some version of this trip has been in the works forever and it just doesn’t end up coming to fruition.  We were in Paris a couple of years ago, but I’ve been dying to go back and explore more.  Also, you all know I am hellbent on going to London and what better time than May when a royal wedding is happening?! We were supposed to go to Italy last year but something came up and it just didn’t make sense at that time, so I’d love to combine all three of these and make it happen this year!

Lake Louise, Alberta, Canada– I’ve seen so many travel accounts that I follow post pictures of this lake and it is absolutely gorgeous.  I would honestly go here in the summer or winter because both times are equally as breathtaking through pictures.  Also, I’ve never been to Canada and have been dying to go sometime.  I could also do Toronto, Montreal, or Quebec.

Moscow, Russia– Mama ain’t playing around here. I’ve wanted to go to Russia for what seems like forever and the funny thing is that Ronnie wants to go too!  I honestly don’t know that this trip will ever really happen but it’s still ok to put it on the travel wishlist!

Seattle, WA /Vancouver, BC– can you believe I’ve never really been to the PNW?  I’ve had Seattle on my travel radar for years and just haven’t pulled the trigger.  I would love to lump this into a trip to Vancouver Canada as well since they are fairly close and doable with a rental car.  I would most definitely go to the original Starbucks and to the Nirvana tour and go see Kurt Cobain’s house.  There are so many cool things I would want to see in Seattle!

Newport, Rhode Island – when we were on our mansion tour of upstate New York, everyone kept telling us that we just HAD to go to Newport, Rhode Island in the summer.  The area is rich with extravagant mansions and opulence that I just need to see in person, so I am hoping to go there with my friends this summer!

Iceland (ALL OF IT)– when I say Iceland, I mean the whole freakin’ island.  I mean renting a car and cruising around to the black sands on one side and then up to the cliffs on the other side and then down to the beaches WHERE I CAN RIDE WILD HORSES and then go soak in the hot baths after AND THEN SEE ALL OF THE NORTHERN LIGHTS.  Obviously, I want this to happen so hopefully it will eventually come to reality for me.